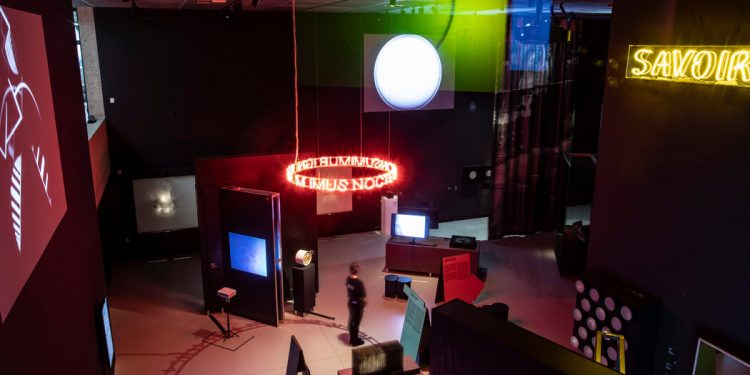 PRAGUE — The Kunsthalle Praha, which opened here on Tuesday in the former Zenger Electrical Substation, is not the first exhibition space in a former power station. But from the get-go, this privately funded redevelopment opposite Prague Castle has put electrically powered art in the spotlight with the opening exhibition “Kinetismus: 100 Years of Electricity in Art,” which runs through June 20.

With nearly 100 works of art, the exhibition shows how electricity has transformed art over the past century, enabling artificial lighting and movement. With the advent of household electricity in the 1920s, artists opened up new possibilities: they were no longer limited to static images and dependent on external light sources.

How much electricity has revolutionized art is not always well appreciated, says Peter Weibel, the exhibition’s curator. Unlike in the field of music, where electric instruments and amplifiers were embraced, he said, “In the art world, disconnected art — such as painting and sculpture — is so highly valued, and art that uses electricity is debunked.”

“There is a lack of understanding,” Weibel said. “This hegemony of painting and sculpture,” he added, was “an injustice to art.”

The Kunsthalle Praha’s opening exhibition shows how the rapid technological advancements of the past century have inspired successive generations of artists, from the early days of cinematography to computer art. Works by Marcel Duchamp, Man Ray and Laszlo Moholy-Nagy are displayed alongside contemporary works by the Tokyo-based art collective teamLab and the Danish-Icelandic artist Olafur Eliasson, whose “Lightwave” installation greets visitors as they arrive.

Weibel, head of the ZKM Center for Art and Media in Karlsruhe, Germany, said the exhibition’s departure point was the work of Zdenek Pesanek, a Czech artist who died in Prague in 1965. Pesanek pioneered what is known as kinetic art — art that relies on movement for its effects. (His 1941 book “Kinetismus” gives the exhibition its name.)

Pesanek had a direct link with the Zenger Electrical Substation building: in the 1930s, he designed a cycle of allegorical sculptures for the building’s facade, made of industrial materials with built-in neon tubes, symbolizing concepts related to electricity, such as the principle of an electric motor. Yet the sculptures never made it to the facade. They were presented at the International Exposition of Art and Technology in Modern Life in Paris, in 1937, but then disappeared in unclear circumstances. (The exhibition opens with preparatory models of the sculptures.)

Another work by Pesanek, “The Spa Fountain”, with two translucent torsos made of synthetic resin, lit from the inside by colored light bulbs and curved neon tubes, is at the heart of the exhibition. It was created in 1936 to celebrate the spa culture in what was then Czechoslovakia.

“Electricity was such a symbol of modernity,” said Matthew Rampley, professor of art history at Masaryk University in Brno, Czech Republic. This was why Pesanek and his contemporaries found it so attractive, he added.

The exhibition is part of a plan by the founders of the Kunsthalle Praha to brighten up the local art landscape. The institution was founded by Petr Pudil, a Czech entrepreneur whose career has stretched from coal to real estate, and his wife, Pavlina Pudil. The Pudil Family Foundation, which the Pudils founded to promote Czech and international modern and contemporary art, bought the building in 2015. The purchase and renovation cost 35 million euros, about $40 million, the couple said in a joint interview.

“Our mission was to create an institution that focuses on contemporary and partly modern art in an international context,” says Petr. In addition to bringing top quality art from abroad to Prague, the Kunsthalle Praha will also provide a platform for emerging artists from Central Europe, he added.

“We have a lot of freedom, because we are a non-governmental and non-profit institution,” said Pavlina, adding that the Kunsthalle Praha will be funded by the foundation and through membership fees.

There is a shortage of privately funded art spaces in Central Europe, Petr said, because “the culture of giving back is still quite new in post-communist countries.” He added: “The reality is that a public institution does not have enough acquisition capital to acquire important works of art – not just in the Czech Republic, but I would say in the whole region.”

“The best post-war and contemporary art is in private hands, and it’s very difficult for the public to see it,” Petr said. “We would like to fill this gap.”

Private ownership also means financial independence in a region where nationalist governments have strained cultural institutions in recent years. “Even though public institutions should be independent, they are funded by governments, and that often has consequences, to varying degrees in different countries,” says Ivana Goossen, director of Kunsthalle Praha. “We’ve seen examples in Hungary or Poland, where the art scenes have been pretty badly affected.”

Petr said he and his wife expected their investment to have a greater impact on Prague’s art landscape. “It’s hard to predict how, but we certainly expect that new galleries will open and this will somehow be reflected in the model of other institutions,” he said.

“As an entrepreneur,” he added, “I strongly believe that if you make a core investment, you definitely create an ecosystem.”