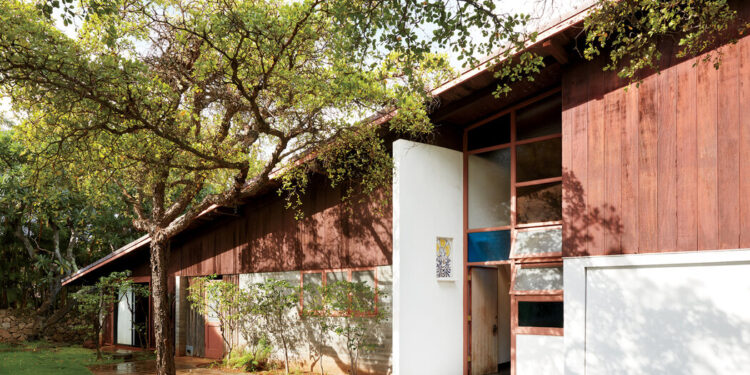 WHEN FRENCH American muralist Jean Charlot arrived in post-war Hawaii in 1949 with an assignment to paint a fresco in the foyer of a newly constructed administration building at the University of Hawaii at Manoa in Honolulu, he had no intention of moving on from the islands are home to make. The 51-year-old performer’s goal was to complete a lavish 10-by29-foot display of ancient Hawaiian life, replete with poi-pounding, spearfishing, and seated hula dances, set during the inauspicious moment just before the approaching Captain Cook’s resolution was observed offshore by the natives.

Once he finished the piece, “Relation of Man and Nature in Old Hawai’i” (1949), Charlot decided to stay. After two decades of traveling through New York, Georgia, California and Mexico for artist residencies, teaching positions, and Guggenheim Fellowship research, followed by a stint as art director at the Colorado Springs Fine Arts Center, he accepted a faculty position with the art department of the Colorado Springs Fine Arts Center. University of Hawaii at Manoa. Charlot had studied at the École des Beaux-Arts in Paris and later spent a period in Mexico, where as a hired draftsman he recreated Mayan murals in archaeological digs at Chichén Itzá and played a part in the Mexican mural movement after the Revolution as a contemporary by Diego Rivera. But it was in Polynesia, when he became acquainted with the age-old customs of native Hawaiians and the people who still practiced them, that he developed a particular focus on nature. Before that, Charlot’s art had reflected his interpretations of Catholicism and Mexican indigenous traditions, in which the material world is separated from the spiritual. In Hawaii, however, it is the domain of the indigenous people akua (gods) was felt in the elements: in a surging wind, which dancers would personify through their limbs in a sacred hula, or in the life force emanating from a rock, carrying the spirit of a kahuna (priest) to a meditative state.

This “all new venture to see the world,” says the artist’s 81-year-old son, John Charlot, professor emeritus of religion at the University of Hawaii at Manoa, is what kept his father on the islands for the remaining 30 years. of his life. More than four decades after his death in 1979, Charlot is still regarded as both a generational talent and an outsider who has become an exemplary steward of the deep Hawaiian ideology that connects land, people and spirituality in contemporary art. “With Christianity in Mexico, you reach God and truth through pain,” John says, while in the Hawaiian worldview, it is “through pleasure.”

THE INnate PLEASURE of the Charlot House, the artist’s first home on Oahu, stems from the same connection with its natural environment. After years of being locked up in the faculty residences of the Manoa campus with his wife, Zohmah, and their four children, Charlot wanted to build a real home for his family, one that reflected both his artistic sensibilities and his appreciation for the islands. Located on a 10,310-square-foot lot near Kahala Beach, the two-storey, 2,856-square-foot residence is constructed primarily of redwood and concrete bricks, with two walls covered with dried hāpu’u, an endemic fern said to soothe muscles in Hawaiian herbal medicine. A cantilevered wooden table extends from the dining room through a wall of sliding glass windows to one of the three porches, creating 558 square feet of patio space that brings the outdoors inside. The same goes for the 12-foot-square fresco of heavy, gaping leaves of bananas, papaya, bird-of-paradise, and red and green ti that Charlot and his friend Oahu-born muralist Juliette May Fraser painted in one of the living rooms. double high walls while the house was still under construction.

Completed in 1958, the three-bedroom, split-level ranch house in the upscale Kahala neighborhood (today it’s incongruously surrounded by mega-townhouses) was a collaboration between Charlot and a local architect, George “Pete” Wimberly. The two men, who were already friends when they started the project, occasionally disagreed over some of Charlot’s impossible architectural ideas, such as his desire to forgo a necessary support column to allow an unobstructed view of his fresco. from the first bedroom in the attic.

And yet Wimberly succeeded. A veteran tropical modernist, part of an elite circle of practitioners including Vladimir Ossipoff and Alfred Preis, he shared Charlot’s appreciation for mid-century design principles that embraced the outdoors: for example, they relied on organic building materials throughout and orientated the structure so that it can be cooled with a breeze instead of air conditioning. (Today, due in part to shifts in the islands’ cooling trade winds, the interior is hotter than it’s ever been.) Compared to the seaside towns of Wimberly, which were attractive to the tourist industry, and some of the other Honolulu homes he’s seen designed, Charlot House is modest. “It’s the least radical of his residences,” said Graham Hart, an architecture teacher and co-founder of Honolulu’s Kokomo Studio, “and that’s no insult.”

One thing the Charlot House shares with Wimberly’s other buildings is a dramatic reveal. A long driveway leads to a stately front door – a slab of plain wood framed by a white plaster wall inlaid with one of Charlot’s own tile murals – which opens into a deceptively cavernous house. On the first floor, a low ceiling, only seven feet high, marks a passageway between the living and dining rooms that divides the house into two parts. mauka and makai spaces, or rooms that deliberately overlook the mountains or the sea respectively, adding a local sense of order and dynamism. “You always felt like you were on your way to a destination,” says John, thinking back to his childhood. “There was movement and outer space at play.”

Charlot and his wife, a social couple, often entertained other artists who visited or lived on the island. They filled their walls with art from their friends – Max Ernst, Carlos Mérida, Madge Tennent, José Clemente Orozco and Tseng Yuho, among others – in addition to Charlot’s. His work was also visible in an upstairs studio, where he pinned sketches onto the enveloping cork wall of the two dozen Hawaiian murals he would go on to create for local institutions such as the Waikiki branch of First Hawaiian Bank and the United Public Workers union headquarters in Honolulu. In recent years the studio was used by a graduate architecture student who was also the house’s resident caretaker – in 2001 the Charlot House was donated by the family to the university, who worked with local conservationists to ensure it was never demolished or be substantially changed. In June, the house was returned to the artist’s family, who remain committed to preserving his cultural status.

WHEN THE CHARLOTS still lived here, they hosted regular luaus with their friends and extended relatives on the spacious lawn; for his work depicting their rituals and customs, Charlot was appreciated by many in the indigenous community. In 1975, an honorary title mele (song), “Keoni Kalo” – with music by Irmgard Farden Aluli, a respected composer, and lyrics by Frank Kimona “Palani” Kahala, a hula teacher and AIDS activist – was made for Charlot, a traditional gesture no other foreign born artist probably has received in recent history. “Kū kilakila i ka la’ia puni i nā pua,” it reads; according to one translation, “You stand gloriously in the tranquility surrounded by many people.”

For as multicultural as the Charlot House is, from the Mexican-inspired brick floors to the Papua New Guinea facade masks over the cantilevered staircases, it speaks most to the artist’s kinship with his adopted home. Like a pulse running through the building, a frieze of 167 ceramic tiles of Hawaiian-inspired petroglyphs depicting simple human figures mixed with a variety of dogs, hand-painted by Charlot and strung across the building’s interior and exterior, serves as a undeniable reminder to anyone visiting that they are in Hawaii. Two more petroglyph tiles are cast villainously from the rest, placed in the floor of a porch, under a round glass table where the Charlots often relaxed. One of these ceramic tiles depicts a family, or at least a close-knit group of people—another reminder that the house, while remarkable in the way it enshrines a bygone era of Hawaiian architecture, was always, above all, designed like a home.