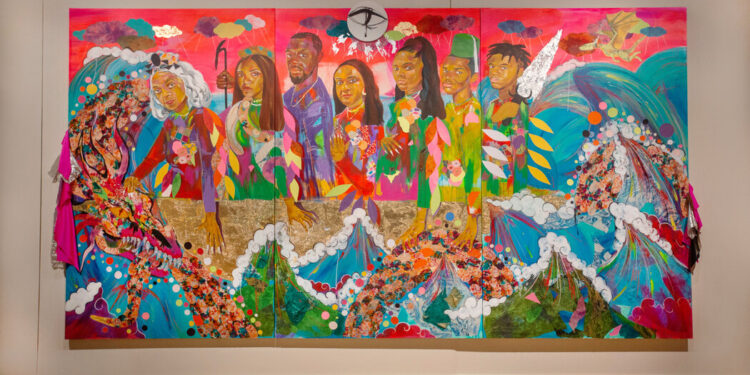 JACKSON, Ms. – Afternoon, midweek, in the middle of the 90-degree midsummer, the streets of a historic center in this southern capital are virtually empty. They are like a movie set, perfectly dated in detail, but used and abandoned in the past.

A patch of sidewalk embedded with the mosaic words “Bon-Ton Café” marks the site of what was Jackson’s toniest restaurant a century ago. The nearby King Edward Hotel, built for wanderlust in 1923 as the Edwards Hotel, later a meeting place for blues musicians, then dilapidated to a recent refurbishment, has little foot traffic. Across the street, trains regularly enter a Georgian Revival-style Union Station, but few passengers get off or board.

Decades ago, transcontinental trains and buses leaving the old Art Deco Greyhound depot a few blocks away were doing good business. And part of that business came from transporting Black Jacksonians north, east and west, from the repressive and dangerous Jim Crow South, to what they hoped would be safer and more prosperous lives in cities like Chicago, Detroit, New York, Los Angeles.

This targeted dispersal of some six million people, known as the Great Migration, is widely regarded as a period stretching from the late 1800s after Reconstruction to the post-civil rights law of the 1970s. And its history gets a major update in a richly diverse exhibit called “A Movement in Every Direction: Legacies of the Great Migration” at the Mississippi Museum of Art here.

A collaboration between the Mississippi Museum and the Baltimore Museum of Art, the show features a dozen contemporary artists living in the United States. All the work, themed on migration, is new, jointly commissioned by the museums in 2020 and completed during a pandemic that has virtually brought most discretionary travel to a standstill. Some artists had access to detailed family histories of relocations from or within the South. For others, geographic paths were less easy to trace. For at least one participant, migration is personal and in full swing, from north to south and to Jackson itself.

Different artists approach their subject in a documentary way. Carrie Mae Weems, the oldest here at 69, is one. In a stage-like video installation titled “Leave! Go now!” she looks back on the grim story of her grandfather, Frank Weems, an Arkansas tenant farmer who was brutally attacked by a white mob for union organizing in 1936 and, only because he was left for dead, managed to survive. He went north to Chicago on foot and never returned home.Weems’s passionate account of the family turmoil caused by his exile, and her appeal for retroactive justice in his case, are the most overtly polemical moment of the exhibition .

Born in 1996 in New Orleans and the youngest contestant on the show, Akea Brionne uses archival material more cautiously. Based in Detroit, she weaves photographic images of ancestors who never left the South – a great-grandmother and three great-aunts – into iconic tapestries that sparkle with sewn-on rhinestones. And Leslie Hewitt, a native New Yorker now living in Harlem, contributes three abstract floor pieces, each suggesting a home foundation and framing delicate pieces of glassware inherited from her grandmother who spent her life in Macon, Georgia.

The idea that vast histories are embodied in material culture—in specific, movable things—is the essence of Theaster Gates Jr.’s installation. called “The Double Wide”. The multi-part piece commemorates his childhood summer trips from his home in Chicago to visit family in Mississippi, where an uncle operated a candy store from a double-wide trailer, which became a juke joint overnight. Gates has his version of the trailer—a pair of boxy structures made from salvaged barn wood, turned into a personalized south-facing shrine on wheels, filled with canned and pickled goods, religious images, and jazzy videos of gospel singing by the Black Monks, a music group. which he founded.

The Washington, DC conceptualist Larry W. Cook explores his roots in Georgia and South Carolina by photographing rural landscapes there and displaying them with vintage portraits of male ancestors dating back several generations. The history he investigates yields a theme: a pattern of absent fatherhood, chosen or forced, and a pattern he hopes to break in his own parenting practice.

Some artists extend the territorial reach of the Great Migration beyond the usual limits. Such is the case with Zoë Charlton, who is of military descent. (She was born at Eglin Air Force Base in Florida.) In a panoramic image composed of flat, cut-out and painted shapes, she situates her grandmother’s sky-blue bungalow in Florida in a landscape, mixing local palm trees with the jungle vegetation of Vietnam, where many black soldiers saw fighting.

Based in Los Angeles, Mark Bradford skips biographical reference altogether in a wall-filling piece of text. His research on Great Migration led him to a 1913 advertisement in “The Crisis,” the magazine produced by the NAACP. in a colony called Blackdom. Bradford’s mural-sized piece, consisting of 60 versions of the advertisement on paper, repeats its utopian invitation like a chant, but also obscures it: much of the paper looks scorched, as if by fire.

Where Bradford substantiates his view of the Great Migration in a concrete source, other artists take a different approach, with less success. Fantasy is the mode in a three-channel wraparound video by Allison Janae Hamilton, in which the ghosts of Black Floridians of the past haunt houses they once called home. A video by Steffani Jemison, featuring Alabama-based recording artist Lakia Black, envisions the digital realm as a liberating destination. And an abstract sculpture of glass and steel by Torkwase Dyson avoids the story altogether. The four hollow trapezoidal components resemble a giant set of audio amplifiers, but the piece is muffled.

In contrast, two of the strongest entries convincingly argue for the ongoing dynamics of Great Migration as a south-facing phenomenon. A monumental chalk drawing, “A Song for Travelers,” by Robert Pruitt, was inspired by this artist’s move from Houston to New York, but pays tribute to the Texas town he leaves, long a vital destination for black migrants.

And in a sparkling collage painting titled “This Water Runs Deep,” artist Jamea Richmond-Edwards depicts herself surrounded by family – mother, sister, husband, children – all sailing together in a gilded boat. There’s a backstory here. Decades ago, after a series of devastating floods hit Mississippi, the Richmond-Edwards family had to leave the land they owned there and go to Detroit, where Jamea was born. They never recovered their land, but the artist recently bought a piece of land near Jackson and plans to move here permanently.

She will certainly be a welcome presence in a city that is an abundant resource for anyone with an interest in the history of this country and interest in black culture. A true-to-life Civil Rights Museum opened here five years ago. The Mississippi Museum of Art has compelling collections of Southern-made work, some of which are on display in galleries adjacent to the Great Migration show, which is hosted by Ryan N. Dennis, chief curator and artistic director of the museum’s Center for Art and Public Exchange, and Jessica Bell Brown, Baltimore Museum’s chief curator of contemporary art. Work by local Jackson artists enliven public walls. And the Mississippi Freedom Trail, marked by signs commemorating era-forming events and personalities, runs through downtown.

Indeed, nearly all the people I saw on the streets in the blazing midsummer were tourists looking for just such signs, the one at the site of the Jackson Woolworth’s 1963 sit-in, and the one identifying the old Greyhound depot from which countless Great Migrators left and where others arrived. “A Movement in Every Direction” captures the pulse of that coming and going that hasn’t stopped. The beat and the feet go on and on.

A move in every direction: legacies of the great migration