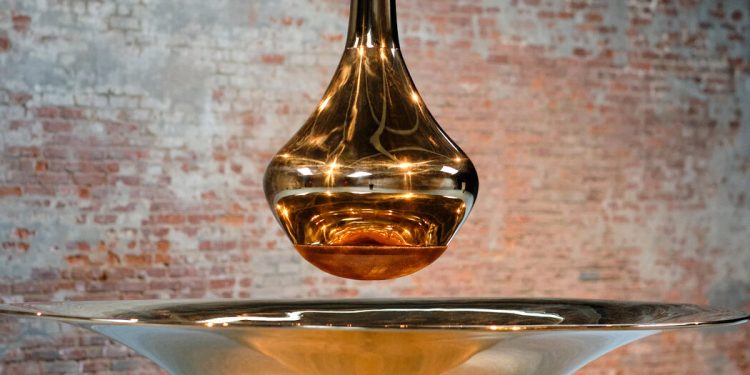 The ringing produced by this hieratic copper sculpture has both a plastic and a sonic component – ​​a point Norment underscores by listing the media used in this installation as “brass, sine waves, autonomous feedback system and static radio archives.” “. In other words, she uses periodic sound (i.e., sine waves) as both a sculptural material it can shape, as a sculptor shapes metal or stone, and also a spontaneously produced phenomenon of the copper and microphones, similar to the tones of a trumpet or saxophone.

The room is both a sculptural installation and an active musical instrument, and after a few minutes the resonant wail takes on an Apollonian dignity. As for the last element, the recorded radio noise, I could hear it only faintly when I got close to the brass bell. It gives a bit of a beat, but it seems like an odd addition, especially after reading an explanatory text on Dia’s website that reveals that the source of the static is from the ’60s and ’70s’ community reporting and documentation of social and ecological struggle’. I’m not sure if explicit political source material was needed. Norment’s ringing and vibrating sound system in itself allows us to experience a fragile interdependence of bodies and environments. Here we are at once creators, listeners and corrupters of an ecology of sound.

The second gallery is much busier. Norment stocked it with dozens of planks of wood—from “responsible wood,” Dia informs us, with a dash of concern from Whole Foods. They reach from the floor to the ceiling and their chocolate brown tones almost match the vaulted roof of the gallery. Embedded in the shelves are loudspeakers, which play loop recordings of a booming choir, whose low bass tones contrast with the higher-frequency sound of the bell room. You can sit or lie on the boards and feel the vocals travel through your thighs and glutes as the chorus takes off. But the use of recordings, the slightly milky ah-ah-ah-ahs of the singers and the maritime overtones of the planks make this installation more like an illustration of a musical ecology. What makes the brass work even more exciting is that it forms one, without sound and space.

Norment was born in 1970 near Washington, DC, but has lived in Oslo since 2005 – the Norwegian capital that has grown over the past decade into one of Europe’s most prolific arts centers. (Much of the revitalization comes from its excellent art school, the Oslo National Academy of the Arts, where Norment is a senior faculty member.) Her sound installations often use the natural frequencies of materials, objects, and even entire buildings, including on the Venice Biennale in 2015, where she used microphones and other transducers to make the Scandinavian pavilion a constant emitter of tones.