Covid memorials provide a place to place our grief 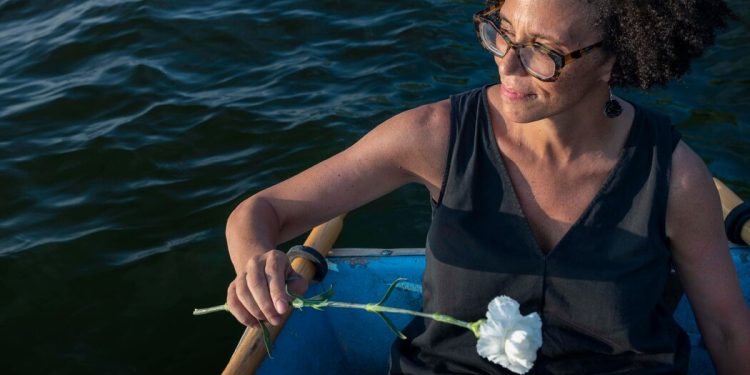 The pandemic has made illness and isolation a constant in our society. It has also caused a tremendous amount of grief. In the United States alone, people mourn nearly a million lives lost to the coronavirus. How do we make sense of our losses as we go through them? How do we move forward and look back at the same time? Our leaders have provided little space or moments of reflection, so artists, as they often do, intervened to fill the gap. Four projects currently on display in New York City take on the work of memorials and monuments: they offer us a place to hold our grief, a place to store it, so that it doesn’t just dwell in our minds and bodies.

In 2020, for a project called “Tender,” artist Jill Magid had 120,000 pennies — the sum of a federal stimulus check — engraved with the words, “The body was already so fragile.” Magid put the coins into circulation by issuing them at, and sometimes giving to, bodegas around New York City. The idea for the project, titled “Tender”, was to make people think about the links between economic and social conditions: the coins spread through human interaction, like the virus, and “the body” can refer to the physical or to an already fragile body politics. Magid documented the process, which took place during the lockdown, and made a short film anchoring her new installation ‘Tender Presence’, produced by the public arts organization Creative Time.

The first thing you see when you step into Williamsburgh’s once grand Dime Savings Bank are rows of bouquets in green buckets, as if they were still for sale at the bodegas where they were bought. The display is a poignant riff on the habit of using flowers to mourn the dead, fueled further by the knowledge that the flowers are already dying. Behind them is a large screen; depending on when you attend, you can sit down and watch Magid’s 29 minute film with musicians performing around you.

The live score — composed by T. Griffin, with sound design by Eric Sluyter — is haunting, sometimes dissonant and often tense, as if it accompanies a thriller. During a section, a musician plays a repetitive, pulsating rhythm, punctuated by steady puffs on a flute. The screen shows a tattoo artist at work, followed by a machine that engraves Magid’s pennies – creative markings on various types of bodies. The beat gives way to wavering, thumping strings after a shot from an empty stretcher in a makeshift morgue.

“Tender Presence” is thought-provoking and poignant at times, but it suffers from the fact that it’s partly about Magid’s work and partly about the pandemic itself. She conceptually connects the two with images of hands, many of which use cash to pay for bodega purchases, but the premise of tracking her custom coins diverts from commentary about how the US values ​​the economy versus human life. The anonymity and invisibility of the coin circulation make it fascinating.

Magid calls “Tender” a “scattered monument”; that probably also applies to Rafael Lozano-Hemmer’s Covid-19 project, although his preferred term is “anti-monument”. Dubbed “A Crack in the Hourglass”, it also started in 2020, when Lozano-Hemmer and his assistants built a special sand plotter with a robotic arm and an AI image processor. As participants submit photos of people who have died from the coronavirus via a dedicated website, the machine pulls them into sand, which pours down from a partial hourglass chamber. When the portrait is ready, the plotter disperses it and recycles the sand. It is very moving to watch that moment of decomposition.

The Brooklyn Museum is now hosting the first physical presentation of an ‘A Crack in the Hourglass’. Filling a single gallery, the exhibition consists of the machine, archived time-lapse videos of the portraits created, benches and grayscale prints of the completed drawings. Despite the plotter’s sophistication, the setup feels purposefully simple, designed to welcome everyone. And its physicality gives new life to the project after such an intensely virtual two years; seeing bits of paper tiled on the wall somehow made the losses they represent feel more real. As a Covid mourner told Ed Yong for a recent piece in The Atlantic: “Putting my grief into something physical would take some of the emotional heaviness away.”

That was part of the impetus for the Zip Code Memory Project, which is investigating the impact of the pandemic on hard-hit neighborhoods in Harlem, Washington Heights and the South Bronx. Sponsored by the Center for the Study of Social Difference at Columbia University, the sprawling project includes workshops, public events, and an exhibit at the Cathedral of St. John the Divine. Titled “Imagine Repair” and curated by Isin Onol, the show features creations from workshop participants and artists, most of whom live or work in the affected zip codes.

The documents mainly document the experiences of Covid-19 on the ground. Some of the strongest contributions are photographs, enhanced by their integration with the architecture of the space. For example, Kamal Badhey’s “Let Your Heart Not Be Troubled” (2020†22), a poetic collection of words and images about moving in with her parents during the pandemic, is laid out on dismantled pews and kneeling benches. The diptych by Susan Meiselas from the doors of her local butcher shop – whose owner died of the corona virus – hangs against imposing chapel doors.

Not all work is of the same caliber, but the show excels at evoking quirkiness and intimacy, such as with the “Depository of Anonymous Feelings” (2022), a hotline New Yorkers can call to share stories and feelings about the pandemic. parts, created by Chelsea Knight with Candace Leslie, Sandra Long and Zahied Tony Mohammed. Like “A Crack in the Hourglass”, which is represented in the exhibition by videos, “Imagine Repair” breaks down overwhelming statistics into individual stories while pointing out that the people who live in the upper town, many of them people of color, disproportionately affected by the pandemic and should be heard and honoured.

For me, the show’s counterpart is downtown, at the Whitney Biennale. Coco Fusco’s 12-minute video “Your Eyes Will Be an Empty Word” (2021) captures the artist rowing a boat around Hart Island, New York City’s public cemetery for the unclaimed dead. Where many Covid projects have tried to break the anonymity of numbers with participation and specificity, Fusco gave itself a more difficult task: remembering those whose stories we don’t know. People like the artist Melinda Hunt have been researching this with regard to Hart Island for decades, but Fusco is renewing the subject with dazzling drone footage and a meditative text narrated by the poet Pamela Sneed. “The loss of life becomes a manageable amount,” she says. “We can treat it as a debt that can one day be forgiven. Forgive and forget, we will run away.”

All these artists, and many others, are doing their best to make sure we don’t.

Until May 15. Cathedral of St. John the Divine, 1047 Amsterdam Avenue, Manhattan; zcmp.org.

Rafael Lozano-Hemmer: a crack in the hourglass

The Whitney Biennale 2022: Quiet as it is held