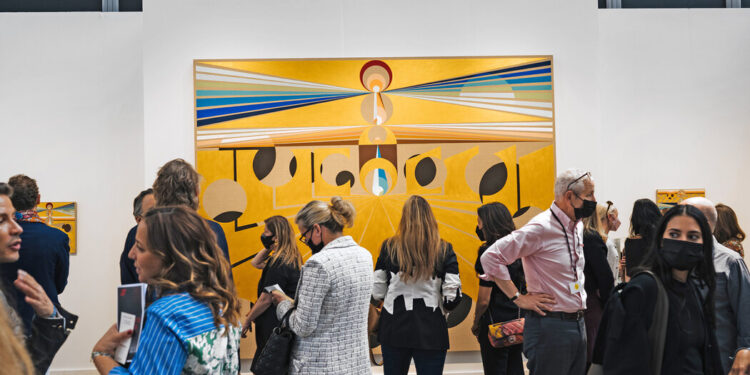 One of the changes in the art world due to the ongoing pandemic is the downsizing and relocation of the Frieze New York art fair. The original Frieze strolled into the city in 2012 – the Everest art fair. It came with its own architecture – a large and glamorous white tent – ferry line and landmass, Randalls Island in the East River (hence the ferry). It had an array of dining options inside and out; lots of places to rest and regroup and ingeniously set up porta-potties. But with a whopping 190 participants, it was an ordeal with benefits, the art fair version of the New York Marathon.

Then came the pandemic. In 2020, the fair took place online only. In 2021, a shrunken, pale, nervous version stumbled into the barn near Hudson Yards on Manhattan’s Far West Side. It didn’t quite fill the available space and was somewhat short of amenities. But manageable in size and accessible by subway, bus, and car, it wasn’t the slightest difficulty (unless you find it an ordeal to be anywhere near Hudson Yards). With 66 galleries it was less than a third large.

Now Frieze is back in the Shed, which is starting to feel like home. Call it Frieze II. The Randalls Island original is a faded glory and praise to the gods of the art fair. Whatever one thinks of the Shed, originally designed as an outpost for avant-garde art forms, acting as a satellite of the nearby Javits Center is another matter.

Frieze II completely occupies the three gallery levels of the barn – 2, 4, 6 – and the architecture has been used to divide the proceedings into five sections of 10-20 galleries each, with the imaginative titles A, B, C, D and Frames (which have the most kinks of the fair). Each has its own look and feel, which provides some clarity. Here are some of the best stands and works.

At level 2, section B is the alpha section of the exchange, so start there. It has the largest booths and the most solo presentations, some of which are about painting. Bee James Cohan (B9) The paintings of Eamon Ore-Giron set a spiritual high tone. Their radiant geometries of gold punctuated by orbs of red, blue or black and white have a pharaonic grandeur that can also evoke Hilma af Klint, art-deco building lobbies and peacocks.

Across the street, at Gagosian (B8), commerce rears its ugly head. Albert Oehlen, a decidedly non-spiritual painter, uses the fair to introduce his entry into the global bottled beverage market, Kafftee/Cofftea. The hybrid drink – a combination of coffee and tea – is available from a handsome black and white vending machine (with tokens issued by the gallery) announcing “International Taste” and “Sleep No More.” On four large Oehlen canvases, eruptions of rough graffiti-like paint splatters disrupt the product labels and contribute to an atmosphere of skepticism. So is Carol Bove’s immense tribute to the monochrome at Zwirner (B14)† The walls are clad in orange-coral fabric and dotted with short, slightly crushed steel sculptures to match. It is a gigantic enveloping painted relief.

Around the corner at Casey Kaplan (B13), Liam Gillick has paid extensive tribute to minimalism and Donald Judd’s emphasis on sculpture with bright colors. As usual, Gillick pushes his objects to the edge of their function – suggesting shelves, partitions or slats – while their brilliant colours, weightlessness and impeccable execution take them back to art. Across the aisle Stefan Friedman (B17)Jonathan Baldock’s ceramic wall pieces and sculptures match Gillick’s palette.

There are other quieter solos here to attend, including an overview of six works and five decades of Joan Snyder’s innovative paintings on Franklin Parrasch (B2)† Opposite, at Hyundai (B6)begins a display of stripped-down Korean art with the gray-and-white brushstrokes of a painting by Kun-Yong Lee, which engages in a dialogue about the art process—with Snyder’s work.

With Michael Werner (B7), a special group presentation includes spectacular paintings by Francis Picabia and Sigmar Polke and a new work by Raphaela Simon. She seems to have given up her more decent abstraction for ‘Half a Head’, a large, not quite human being with a sharp nose in deep orange surrounded by, but also limited by, black. It may be a reaction to the almost all-male phenomenon of German neo-expressionism, but there’s more to it.

Section A is quieter and more patchy than B, more like an Easter egg hunt. There are good things to be found in almost every position. Some take center stage, such as the two quilt-like works by Filipino-born, American-educated artist Pacita Abad (1946-2004) in Tine Kim (A9)† Painted on a quilted canvas, “How Mali Lost Her Accent shows a young brown-skinned woman with stacks of books surrounded by the pennants and some buildings of high-end American colleges; “Weeping Woman”, from 1985 and decorated with cowrie shells, glass beads and rickrack, looks more like an icon.

Other gems can be discovered just as you are about to leave a booth, such as Sanford Biggers’ ‘Drunkard’s Path’ on Massimo de Carlo (A1)† An amalgam of antique quilts, it’s painted with a loose spiral in shades of brown that meanders through the star pattern that reads like a night sky or a forest undergrowth. Bee Luisa Strina (A2), Don’t miss the small but vibrant 1985 untitled painting on paper by the generally conceptual Brazilian artist Cildo Meireles. It shows two bright red men in a room, fighting fiercely or perhaps embracing. Bee Xavier Hufkens (A7) there is a small enclosed space devoted to the longing, painful work of British artist Tracey Emin. It contains a painting, some drawings, a neon piece and a small gray patinated bronze of a woman being attacked by forces beyond her control. It’s titled “In My Defense – I Was Thinking Only of You.”

Things seem to go down a bit in section C, but there are several pairs of performers who are spicing them up again. Rachel Uffner (C9), for example, has hung her walls in small gouache from panel paintings by Anne Buckwalter: these faux-naive, high-precision, carefully decorated interiors seem a bit dull at first, but contain every detail that refers to sex between women. They surround Bianca Beck’s also small sculptures in carvings, painted – actually dipped – in bright, raw colors whose curves and angles have a clear postcoital horizontality.

The proceedings get funnier, darker, and hotter in the Frame section, whose smaller stands are devoted to galleries that have been open for 10 years or less.

Bee Lubov (FR11) the mood goes goth with Marsha Pels’ “Dead Cowboy,” made from scrap metal and consisting of nothing more than a skull, spine, gloves and boots on a laid-back motorcycle that is mainly a rib cage with wheels.

Bee Company (FR8)”Post You, Post Me” is a hyper-realistic showstopper created entirely by Swedish artist Cajsa von Zeipel. It features several life-size mannequins of beautiful scantily clad women lying together on a crumpled bed, bodies touching and overlapping, yet strangely distant from each other. Hybrid rules. Limbs appear both female and male. Fingers shoot sex toys and a separate piece of “Celesbian Terrain” features a fully clothed, extremely alarmed woman (security?) with a crossbow sticking out of one knee. But the piece is also touchingly humane. Across the aisle Se (FR7), a series of small paintings by Rebecca Sharp quietly update surrealism. Around the corner, at Castle Shatto (FR1)Emma McIntyre’s gestural abstract paintings stand out in their confidence, color choices and brushwork, if not original enough.

Institute of Vision (FR4) has one of the fair’s more modest installation pieces and a beautiful one. It consists of seven conical loudspeakers made of mouth-blown glass in various bright colors; although they weren’t when i saw them, they will play music based on the sounds they made themselves.

Level 6: Gone With A Bang

Section D is dominated by a procession of galleries with excellent group presentations anchored by beautiful paintings. At the Modern Institute (D5) this task is fulfilled by large works by Matt Connors and Victoria Morton and very small works by Andrew Kerr, although they gather around Marc Hundley’s surreal riff which looks like bronze but is in real painted wood.

Bee Karma (D6), a 1972 Untitled stain painting that looks vaguely Fauvist by Robert Duran (1938-2005) stands out. Other works that balance between image and abstraction are by Marley Freeman, Ouattura Watts and Maja Ruznic, whose more clearly figurative new effort makes her look less Rothkoesque, which is a good thing.

The solo performances here are both excellent. Gallery Michael Rosenfeld (D10) examines the obsessive figuration of veteran artist Nancy Grossman, now 82 and famed for her heads tightly wrapped in intimidating leather hoods. Striking are the collages of figures that Grossman started making in 1973 with soaked tinted paper. They are perhaps her gentlest, gentlest works.

And Modern art, London (D12) introduces in New York the mysterious narrative paintings of Karlo Kacharava (1964-1994), an artist, critic and poet who lived most of his life in Tbilisi, Georgia. Kacharava’s small, dark, stylish works feel, like some of Kai Althoff’s, archaic and contemporary at the same time. Drawing on illustration and the comics, they often contain language and collage and show a mixture of romance, intrigue and deadpan humor that could be called Eastern European noir. They end the first Frieze II on a high note.