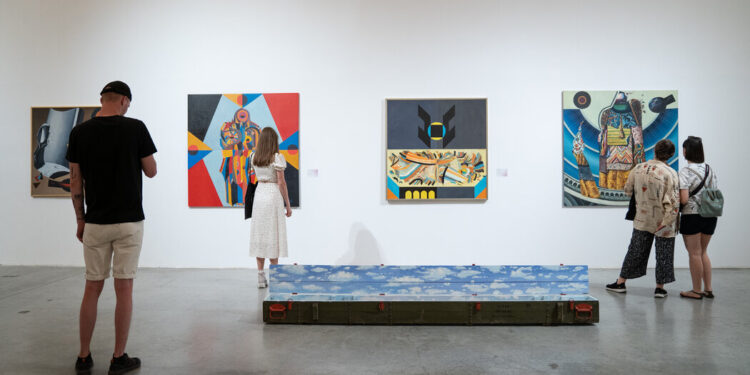 KYIV, Ukraine — Most of the galleries are now empty in the Mystetskyi Arsenal, one of Europe’s largest art museums. As with almost every cultural institution in the Ukrainian capital, the curators and archivists took down the displays when war broke out on February 24. A large part of the collection of approximately 4,500 objects has been moved to a safe location. Gallery after gallery is sitting in the dark. And yet, this summer the Mystetskyi Arsenal is open to the public, with a powerful and beautiful exhibition that is all the more impressive for its modesty and candid emotions.

Inaugurated on June 10 at this leading contemporary art museum, “An Exhibition About Our Feelings” is the first major exhibition here to focus on the Russian invasion of Ukraine – although not in the way you might expect. It offers a look at life during the current war through Ukrainian art from the 1960s to the 2010s; nothing current has been ordered or added to illustrate what the public is going through today.

A painting of sunbathers by Odessa painter Yurii Kovalenko, for no reason, evokes the landmines that now lie beneath that city’s beaches—but it dates back to 1989. A near-abstraction of shaded gray stripes by Halina Nledva appears as a row of soldiers, or row of refugees; it was painted in 1991. This is an exhibition of injury and uncertainty, but also persistence, humor and a dark hope for a land reborn.

“This is a very unusual project for us,” said Olha Melnyk, Arsenal’s head of museums and chief curator of this exhibition, as we recently walked through it together. She and her team staged the show in just a month (instead of the two years typical for museums of this size and caliber), as employees who left Kiev began to return in late April, after the Russian withdrawal.

“We are constantly in such a swing between light and dark, between hope and despair,” Melnyk said. “But institutions also need to show resilience, support people, support the side of light.”

When Mystetskyi Arsenal’s team got back together here in April, they were overwhelmed with emotions and unable to shape them. It was much too early to analyze the war. So they decided to sublimate the chaos of the invasion, writing their newfound fears and hopes on pre-existing works by 17 artists. They saw their own vulnerability in a painting of a mother’s difficult birth in the early 1960s, by Yurii Solovii (1921-2007), who came to the United States as a refugee after World War II. They saw a vision of national reconstruction in a more recent painting, by Oleh Kharchenko, of two naked carpenters lounging on a construction site.

They brought out several paintings by Soviet dissident Oleksandr Dubovyk: jagged, dissonantly organized compositions of sharpened knives, spinning bodies and torn fragments of Titian’s masterpieces. Dubovyk is now 91 years old; he squatted in Kiev during the first terrible days of the war, and came for the opening of the exhibition.

“It’s like trying to predict our future,” Melnyk said as we stood in front of a Maria Prymachenko watercolor depicting two little monkeys and an open-jawed crocodile. “Our perceptions have changed and we are able to see new meanings.” Before February 24, Prymachenko was considered a good-natured, cheerful folk artist. Since the invasion and destruction of a regional museum to which the artist donated dozens of paintings, that open-jawed crocodile looks a little more menacing.

“We don’t know either,” said Melnyk, “whether we will be able to escape from this terrible beast.”

Wars and disasters can evoke an unfortunate cultural reflex in many target groups. In the early weeks of the war in Ukraine, Western news outlets turned to images — mostly posted by amateur artists to social networks – from newly created ‘relevant’ works (beautiful crying women, hands reaching to the sky, doves and flowers), as they did before Syria, Afghanistan and Iraq. To this desire for immediate aestheticization, “An Exhibition About Our Feelings” says forcefully: not now, not us. It emphasizes that art is not propaganda, and Ukrainians need something else from their museums, something more profound, than a restatement of what they already know.

This approach has been used in other shows that have dealt with traumatic episodes of national violence, most notably “September 11” at MoMA PS1 in New York, where most of the art predates 2001; and “We Are Living on a Star,” at the Henie-Onstad Kunstsenter outside Oslo, which placed historic artworks in the shadow of the 2011 Norwegian terrorist attacks. There will be time to create later. Anyway, the past tells the present all too well.

The only new material in “An Exhibition About Our Feelings” is a series of video interviews with Mystetskyi Arsenal staff, describing the chaotic experience of working in a war museum. The director, Olesia Ostrovska-Liuta, talks about her team’s plans to protect the collection in the event of a large-scale invasion, and the disbelief that they would ever need it. A security guard describes the fear and pride of staying in the museum during shelling. The head of the literary department tells how she had to turn down foreign interview requests because the sirens wouldn’t stop blaring.

The museum’s in-house videographer, Oleksandr Popenko, talks about the surviving massacres in the city of Bucha, while holding up a computer disk full of archive footage. “This hard drive contains everything I’ve filmed at Arsenal since 2017,” he says. “I had to leave it in Bucha in the room where the projectile hit.”

The Mystetskyi Arsenal was founded in March 2005, in the wake of the Orange Revolution that brought President Viktor Yushchenko to power. Yushchenko’s government established the Arsenal as a national arts complex and gave its directors an explicit mission to put social issues and general education at the heart of its programming, ranging from art and theater to book fairs and concerts.

It is housed – a terrible irony, now – in a historic Russian weapons warehouse, built in the last years of the 18th century at the behest of Catherine the Great. Indeed, the arsenal is an architectural landmark in its own right. This was the first major neoclassical building to be built in Kiev, with a straw-colored stone facade and huge galleries under large brick-lined vaults. The ring-shaped building is a whopping 60,000 square meters, although only about 12,000 square meters was in use before the war. (By comparison, the Palais de Tokyo in Paris, commonly referred to as the largest art space in Europe, is 22,000 square feet, with 8,000 square feet of gallery space.)

At the moment the exhibition attracts about 700 visitors a week: less than in peacetime, but more than the museum had expected. Many visitors are internally displaced Ukrainians, who are given free entry. Due to the security situation, the Mystetskyi Arsenal had to remain nimble, limiting the show’s footprint to just two galleries – although two galleries of this huge museum are nothing to sniff at – and privileged paintings and smaller sculptures that can be moved around with ease. (On the days before I visited, rocket attacks in central Kiev forced the museum to close.)

Yet, despite or even because of its scale and approach, “An Exhibition About Our Feelings” poses the most fundamental questions that institutions in peaceful parts of the world have forgotten to answer. What is art for anyway? Do extreme times prove that art has always been a replaceable luxury – or can they reveal that art matters in ways peacetime failed to show? Looking at the tumultuous street scenes in Kiev, the shell-shaking portraits and brazen nudes, I could glimpse a museum that is so much more confident than ours about why their work matters, a museum that isn’t afraid to put it all on the line. to put game. Even the show’s title suggests a directness and openness about the place of art today, as if we can finally say what’s in our hearts.

The gallery adjacent to the “An Exhibition About Our Feelings” remains in limbo, as does the gallery after and the gallery after. Leaving most of the museum empty was an economic and military necessity, but the curators made the best of it by leaving a door open at the end.

“It illustrates our consciousness — the tunnel consciousness we live with today,” Melnyk said as she stared into the dimly lit rooms. “We survive day by day and gradually we move through these days into the future.”