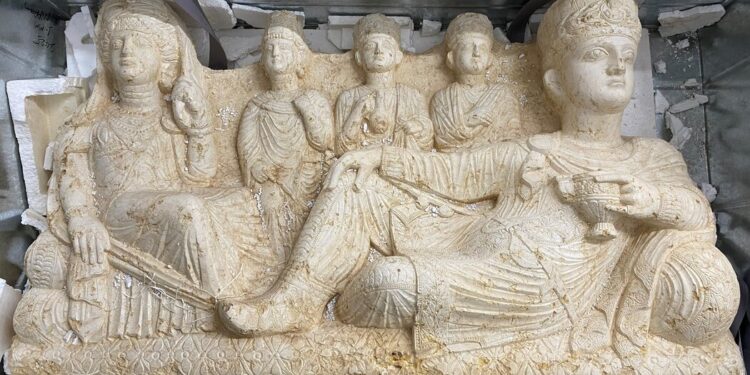 Georges Lotfi was for many years a valuable source of information for prosecutors investigating the global trade in looted antiquities.

A tip from Mr Lotfi led to the seizure of Nedjemankh’s gold casket from the Metropolitan Museum of Art, where it had been on display before police determined it had been looted from a grave and returned it to Egypt, according to court papers. .

His diagram of how international smuggling networks worked was used as a teaching tool, a federal agent said in the papers, a sketch that aided the Department of Homeland Security in its hunt for traffickers.

But now an arrest warrant has been issued for Mr Lotfi, who is accused of criminally possessing stolen goods and who, according to investigators, was himself involved in the trade in stolen antiquities for decades.

In what has been characterized in court documents as an act of hubris, Mr Lotfi, 81, is alleged to have invited authorities to inspect antiquities he had in a storage unit in Jersey City, NJ, which they did in 2021.

According to the affidavit accompanying the arrest warrant, dated Aug. 3, he was so confident in his ability to convince law enforcement that the objects had been purchased legitimately that he invited the agents over, hoping their involvement would earn the stamp of approval. that he needed to successfully sell or gift the items.

Robert Mancene, a Homeland Security agent involved in the investigation, wrote in the affidavit that he believed Mr Lotfi believed his helpful relationship with Mr Mancene – and with Matthew Bogdanos, who heads the Antiquities Trafficking Unit from the Manhattan District Attorney – would put him above suspicion.

“Based on my conversations with the defendant over the years,” wrote Mr. Mancene, “I think the defendant thought he had laundered the antiquities so well and created such a good (albeit false) provenance that he did not think the ATU would be able to determine their true origin.”

Instead, according to court papers, investigators are now pursuing Mr Lotfi, who has had homes in Lebanon, France and New York.

In a telephone interview after the arrest warrant was filed, Mr Lotfi said he was shocked by the charges against him and that he had spent years providing information to law enforcement officers in an effort to end the illegal activity around antiquities. Mr Lotfi said the antiquities he bought came from authorized dealers and his collection has been approved by the Lebanese government.

“I’ve been fighting with them for ten years to stop the illegal trade, and they turned on me,” he said of the investigators, characterizing the charges against him as an attempt to draw public attention to their work. .

The 24 antiquities seized as part of the unit’s investigation include 23 mosaics from Syria and Lebanon and a 1,500-pound carved limestone sculpture called the Palmyra Stone, which the affidavit says was originally from that ancient Syrian city. coming. The individual items ranged in value from $20,000 to $2.5 million, the affidavit said.

Mr. Mancene wrote that Mr. Lotfi had expressed his intention to loan or donate many of those two dozen antiquities to major museums. Officials claim that many of the looted items passed through ports in New York and New Jersey and were kept in an apartment on Fifth Avenue.

The investigation into Mr. Lotfi, who once worked in the pharmaceutical industry in Lebanon, began with an investigation of a 2,300-year-old marble bull’s head. The piece was loaned to the Met but was seized in 2017 by the Manhattan District Attorney’s office, which said it was stolen from Lebanon during a civil war that rocked the country from 1975 to 1990. . The Met papers listed Mr. Lotfi as the first documented owner of the relic, valued at $12 million.

A second antiquity, a $10 million marble torso believed to have come from the same place, was later seized from Mr Lotfi’s New York apartment, according to court papers. A third work from the site was found by Lebanese customs officials in a container that Mr Lotfi had shipped from New York to Tripoli, the affidavit said.

Mr Lotfi told investigators that he had purchased the three antiquities from a “well-known authorized dealer” in Lebanon in the 1980s.

In the interview, Mr Lotfi said that when he started collecting in 1960, it was not typical to ask where antiquities came from.

“It was like getting a baguette from the baker,” he said. “It wasn’t a big deal, and no one will look for its origin.”

Now, he said, he acknowledges that the rules around collecting have changed, but he said he can’t go back and change what happened decades ago.

Mr. Lotfi, who described himself as an art and history enthusiast who once owned an apartment on Fifth Avenue due to its proximity to the Met, said he invited researchers to view some of his artifacts because he was interested in borrowing them. of what – they don’t sell – to an American museum.

Mr Lotfi said he planned to return some of the artifacts to Lebanon, but US investigators responded by confiscating them.

The charges against Mr. Lotfi are part of a larger move by the Manhattan District Attorney’s office to repatriate antiquities to the countries from which they were looted. About a decade ago, the agency, along with the Department of Homeland Security, began seriously investigating the whereabouts of looted antiquities, claiming success in convicting 12 traffickers and seizing more than 4,300 antiquities.

To justify the seizure of the 24 antiquities, the researchers said they had evidence — some photographic — that about a third of the items appeared dirty or “with scabs” at the time Mr. Lotfi bought them, a strong indication that they were looted. (Legal digs include a thorough cleaning of items, the sworn notes.)

In the end, Mr Lotfi’s expertise in looting antiquities that Mr Lotfi has shown to the police over the years proved to be working against him as investigators concluded that he should be aware of provenance issues. of the objects he had acquired. All 24 items, the affidavit said, were sold to Mr Lotfi using “fabricated or overly generic provenance”.

Mr Lotfi rejected claims that the antiquities were stolen, saying that his purchase and ownership of them is subject to Lebanese law and that any allegations that he tried to mislead investigators by inviting them to his storage room was “fake”.