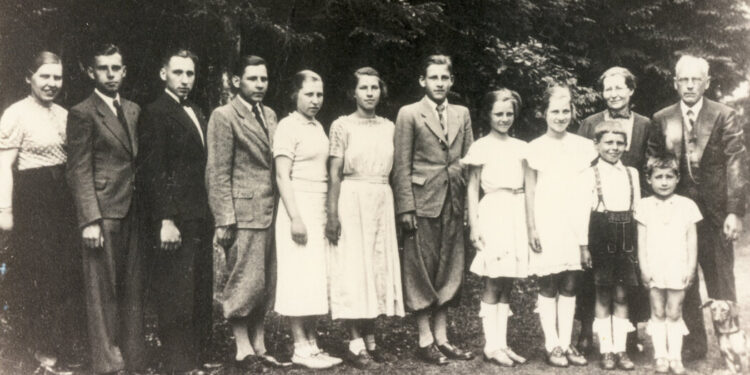 The Jehovah’s Witnesses, a pacifist religious group, are taking legal action against the German government to demand a family archive documenting the Nazi persecution of the Christian denomination.

The archive contains 31 files containing documents related to the Kusserow family, whose members were arrested, imprisoned and murdered by the Nazi regime because of their faith.

It has been in the possession of the Museum of Military History in Dresden, which is operated by the German army, since 2009 when it was bought from a member of the Kusserow family.

A German regional court last year rejected the Jehovah’s Witnesses’ claim, saying the museum had bought the archive in good faith and had to preserve it. But the religious group is appealing that ruling, arguing that the relative who sold it did not actually own the archive, which was bequeathed to the Jehovah’s Witnesses in the 2005 will of Annemarie Kusserow, the relative who had the archive. collected and maintained. the documents.

The museum’s preservation of the archive, says Wolfram Slupina, a spokesman for the Jehovah’s Witnesses in Germany, “robs us of an important and invaluable part of our cultural heritage.”

The archive documents the lives and suffering of the family of Franz and Hilda Kusserow, devout Jehovah’s Witnesses, who raised their 11 children in a large house in Bad Lippspringe in northern Germany when the Nazis came to power. The Jehovah’s Witnesses were the first religious denomination to be banned, and the Kusserows’ home was searched 18 times by the Gestapo for religious material.

In 1939, the three youngest children were kidnapped from their school and sent to a Nazi training school, where they were denied contact with their families. Franz, Hilda and the other children were all sentenced to prison terms. Two of the brothers, Wilhelm and Wolfgang, were executed as conscientious objectors.

On April 26, 1940, the night before he was executed, Wilhelm sent a letter to his family.

“You all know how much you mean to me, and I am repeatedly reminded of this when I look at our family photo,” he wrote. “Nevertheless, we must love God, as our Leader Jesus Christ has commanded. If we stand up for him, he will reward us.”

Wilhelm’s farewell letter – and that of his brother Wolfgang – are among the documents in the family archive.

Some 1,600 of Jehovah’s Witnesses died as a result of Nazi persecution. About 4,200 were sent to concentration camps, where they were identified by a purple triangular badge attached to their camp uniforms.

They were the only persecuted people who had the choice to end captivity: if they signed a declaration renunciating their faith, they were set free. Very few agreed to sign, Slupina said.

Before she died, Annemarie Kusserow, the archive keeper, had loaned documents to her brother, Hans Werner Kusserow, to make copies for a book he was writing.

Although Annemarie stipulated in her will that the documents go to the Jehovah’s Witnesses headquarters in Selters, a small town northwest of Frankfurt, her brother, who was not a member of the faith, sold them to the museum in Dresden for less than $5,000.

He has also since passed away; only Hilda and Franz Kusserow’s youngest child, Paul-Gerhard, is still alive. He’s 90.

“My brothers died because they refused to participate in military service,” said Paul-Gerhard Kusserow. “I don’t think it’s fair that this legacy is kept in a military museum in any case.”

A spokeswoman for the Museum of Military History declined to comment on the legal battle. The museum’s permanent exhibition includes two documents from the archive in a section on the victims of the Nazis; four other items, including Wilhelm’s suicide note, are on display in an exhibit on resistance to the regime, spokesman Kai-Uwe Reinhold wrote in an email.

“Inclusion of various objects from the Kusserow archive in the permanent exhibition is of great value to the museum and to the public,” Reinhold wrote. “These objects bear witness and are a powerful reminder that religious freedom and firm beliefs cannot be taken for granted, they must be defended and fought for over and over.”

During the negotiations for the lawsuit, the Dresden Museum offered to provide the religious organization with copies of all the documents in the archive, Slupina said. But the Jehovah’s Witnesses turned down that offer.

The regional court ruling last year ruled that Hans Werner Kusserow had not stolen the archive and was in lawful possession at the time of the sale, which was therefore legitimate, regardless of who the legal owner was.

The Jehovah’s Witnesses also dispute the court’s finding that the purchase was made in good faith, arguing that the museum should have known from correspondence with Hans Werner Kusserow that he did not own the archive or have the right to use it. to sell, Pikl said. . In 2008, Hans Werner wrote to a museum employee that he and his two surviving siblings agreed to a “long-term loan” of the archive to the museum. A representative of the Jehovah’s Witnesses has also been in contact with the museum about the loan. The group argues that the museum should have suspected from this contact that Hans Werner was not authorized to sell the archive.

Slupina says the group is expanding its premises in Selters, including its permanent exhibition there. “The fate of this family is closely tied to the fate of the Jehovah’s Witnesses,” Slupina said. “We find it very important that these documents are taken care of by us.”

Specific mention of the suffering of Jehovah’s Witnesses is often omitted in Holocaust records or on memorials; they’re often included in a vague reference to “other victim groups,” Slupina said. While Berlin has memorials to the murdered Jews, Sinti and Roma, gays and euthanasia victims, there is as yet no memorial dedicated to the Jehovah’s Witnesses murdered by the Nazis. Erhard Grundl, a member of parliament from the Green Party, called for a specific monument to the religious group in a speech to parliament on January 13.

A hearing on the appeal of Jehovah’s Witnesses has yet to be scheduled.