Looking back on a colonial struggle, a museum stirs up new disputes 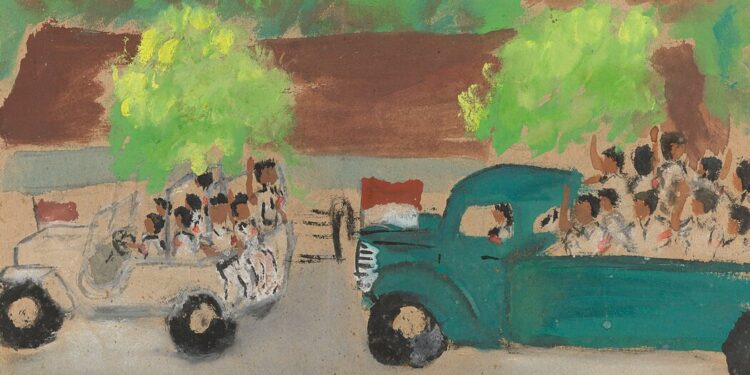 AMSTERDAM — When the Rijksmuseum decided to hold a major exhibition about the Indonesian freedom struggle after 350 years of Dutch colonial rule, the director knew that he was treading in disputed territory.

“If, like us, you make exhibitions about our history, then you also hear parts of our history that are difficult,” says Taco Dibbits, leader of the National Museum of the Netherlands since 2016. “You know there are reactions, even very emotional reactions, but that’s one of the reasons we did it: to contribute to the dialogue.”

But the discussion around the Rijksmuseum ‘Revolusi! Indonesia Independent’ show, which starts Friday and runs through June 5, came faster than Dibbits had hoped. Before the show even opened, a Dutch lawmaker accused the museum of “madness” and a foundation filed a genocide denial claim against a curator.

Since Indonesia’s first president, Sukarno, declared independence on August 17, 1945, the four-and-a-half-year struggle that followed has been hard to define. Some called it a revolution, others as a war between the Netherlands and the new Indonesian Republic, and still others as a process of decolonization.

The fighting claimed the lives of some 100,000 Indonesians, both fighters and civilians, while an estimated 5,500 Dutch and Indo-Dutch colonialists, as well as members of other ethical groups linked to the colonial power, were killed in attacks by Indonesian insurgents.

Today, about two million residents of the Netherlands, a country of about 17 million people, are former residents of Indonesia and their descendants, or are associated with Indonesia in some other personal way, Dibbits said. Still, he said that many Dutch people were not aware of the Indonesian side of the story, which is not often taught in schools.

Four curators led the Rijksmuseum’s exhibition team – two Dutch and two Indonesian – and they began their research and collaboration in 2018. The show they produced focuses on how the battle was experienced by eyewitnesses, including artists, journalists and activists.

Since January, when one of the Indonesian curators of the exhibition, Bonnie Triyana, wrote an opinion essay in NRC Handelsblad about the approach of the Rijksmuseum, the exhibition has been subject to controversy. In the essay, Triyana said that the curators had decided not to use a loaded word that some Dutch people use as a collective name for the violence of the independence struggle, but that some Indonesians consider racist.

Triyana wrote that the Malay word “bersiap” – meaning “standby!” and was often shouted by Indonesians as a rallying cry – associated with “primitive, uncivilized Indonesians as perpetrators of the violence.” Because the term risked simplifying this history, he said, the exhibit would avoid its use and take the place of more specific terminology.

But Micha’el Lentze, board member and spokesperson for the Federation of Indo-Dutch, a foundation that represents the interests of some 300,000 people who were repatriated to the Netherlands during the battle, and their descendants, said many survivors use the word to describe a period of ‘ethnic cleansing’.

The federation filed a legal complaint, arguing that Triyana had violated a European statute that prohibits denial of genocide for “ignoring historical facts”. “The word is not important,” Lentze said, “but the fact that people have been killed because of their European or Dutch descent, or because they are Chinese, is important.”

The prosecutor’s office rejected the complaint on Wednesday, but Lentze said the federation would appeal.

Shortly after the NRC opinion essay was published, Annabel Nanninga, a Dutch senator from the right-wing party JA21, said the decision to “banish” the word “bersiap” from the Rijksmuseum’s exhibition was part of a pattern of ” woke madness” at the museum.

It does, however, appear in the exhibit: in the catalog (which was sent to the printer before the controversy broke out, Dibbits said) and on a museum wall in text describing Indonesian insurgent attacks on civilians.

Dibbits said the museum had never banned the word, but decided to limit its use and provide context around it. “It is our job as Rijksmuseum to give people a more complete picture of our history. I see it as an addition to our history. I don’t see it as awake,’ Dibbits said. Triyana did not respond to interview requests.

Remco Raben, a historian at the University of Amsterdam, teaches colonial and postcolonial history, and worked as an advisor to the museum’s curators, saying: “I think the museum got cold feet because of the outrage, because of this very small group of Indo- Dutch people who started this lawsuit.”

Dibbits refuted that idea. “We didn’t,” he said. “Otherwise we would not have organized the exhibition.”

During the development of the show, Raben said he met with curators to locate interest groups who might be affected, including Dutch war veterans who served in Indonesia, and people of Indo-Dutch descent.

‘I warned them,’ Raben said, ‘but they were also aware that they could do no good. There would be heated discussions anyway.”

Indonesia, formerly known as the Dutch East Indies, is an archipelago of more than 13,500 islands: in 1945 it had more than 68 million people. Raben said it was important to find a “polyphony” of perspectives for the exhibition, or, as he wrote in the catalog, “a really wide variety of diverse, chaotic, contradictory voices.”

These perspectives are represented by 230 objects. The show begins with a photo of Sukarno making his historic proclamation of independence in 1945, but instead of highlighting the revolutionary leader, the curators draw attention to the man behind the camera: photojournalist Soemarto Frans Mendur, who is featured in the catalogue. as “Indonesia’s first photojournalist.”

A green fatigue shirt on display, riddled with bullet holes, belonged to Tjokorda Rai Pudak, a Balinese man who founded a socialist youth organization, the Fighting Lion. A local Balinese militia, supported by a Dutch patrol, arrested Pudak and executed him.

Jeanne van Leur-de Loos, an Indo-Dutch woman imprisoned in an internment camp during World War II, is introduced via a colonial-style long dress made from scraps of silk military cards she found at a flea market. After Indonesian independence, she was forced to repatriate to the Netherlands.

“My son studies the revolution and he thought everything was just war,” said Sidharta. “I said, ‘No: there was diplomacy, and there was art, and there are all these other aspects of life going on.”

“Unfortunately, I think that’s something that isn’t taught”, said Sidhartha. “These everyday life stories help us form a more complete understanding of the revolution, rather than just the violence.”