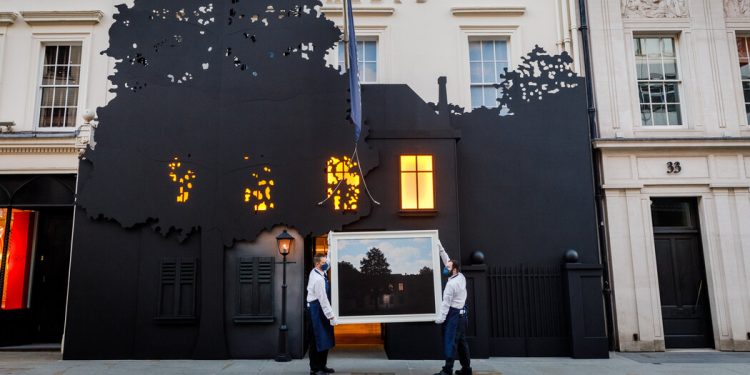 One of René Magritte’s famous “Empire of Light” canvases was sold on Wednesday for £59.4 million with fees, or about $79.7 million, nearly three times the auction price for a work by the Belgian surrealist artist. The 1961 painting, which was set to fetch $60 million thanks to a guaranteed reserve price funded by Sotheby’s, was sought by three bidders, all represented by Sotheby’s specialists on telephones in London.

The painting ‘L’empire des lumières’, which alternates a night-lit street with a serene day-lit sky, is one of the most celebrated and enigmatic images in 20th-century art. From 1948, Magritte painted no fewer than 17 canvases with the subject day and night.

Sotheby’s variant, one of the newest and largest, was created for Anne-Marie Gillion Crowet, the daughter of Magritte’s friend, patron and chess opponent Pierre Crowet. It had remained in the same family collection ever since.

“Numerous versions have been sold over the years and they have performed extremely well,” said Melanie Clore, co-founder of the London-based art consultant firm Clore Wyndham.

She said this 1961 work was “one of the most coveted paintings by Magritte to come up for auction in terms of composition, scale and condition”.

In 2011, when Clore was working as a specialist in Impressionist and Modern art at Sotheby’s, her department auctioned a 1953 version for $3.8 million, although that was not among the highest prices achieved for the artist at the time.

The Magritte was the obvious standout lot this week in London’s spring series of auctions devoted to impressionist, modern and contemporary art. But top sales like this at the European headquarters of Sotheby’s, Christie’s and Phillips aren’t what they once were.

With the UK economy slumped by Brexit and China a stronger force in the global art market, London was the third best-selling auction center in 2021, after New York and Hong Kong, according to Pi-eX, a London-based company that analyzes international auction sales.

London’s hybrid live online ‘evening’ sales are now held in the afternoon, across time zones around the world, and impressionist and contemporary artworks are no longer auctioned on separate days. Bonnard gets mixed up with Basquiat and Banksy.

“It’s a new world,” said Paris-based dealer Christian Ogier, who regularly attends these London auctions. “Mixing modern and contemporary is understandable. Why not? I don’t stop at any category.”

But London, with its vast concentrations of international wealth, including Russian oligarchs with ties to the Kremlin (which the British government is now trying to restrict and regulate), remains a magnet for buyers and sellers of major art trophies.

In addition to the Magritte, Sotheby’s also included a Monet “Nymphéas”, or water lily canvas, painted in 1914-17, which had not been seen at auction since 1978. Imported from a Japanese collection, this fetched $31.2 million, bought again by a telephone bidder.

On Tuesday evening, Christie’s offered ‘The Foxes’, a fresh masterpiece by German Expressionist painter Franz Marc, as the headline of its spring sale in London.

Recently returned to the heirs of Berlin collectors Kurt and Else Grawi, “The Foxes” (1913) was one of Marc’s most powerful Cubist-influenced animal studies. (The artist admired them more than people.)

Guaranteed to sell for at least $47 million, it was pushed to $57.2 million by three telephone bidders, the highest price of the Christie’s sale and a record for the artist at auction.

Francis Bacon’s seemingly impressive “Triptych 1986-7” was similarly estimated and guaranteed. But Bacon’s later paintings are much less sought after than his earlier works, and the work fell to a single bid of $51.6 million, the ninth highest auction price for the major artist.

About 90 percent of the lots at Christie’s found buyers, but Banksy’s “Happy Choppers,” an ironic stencil painting of attack helicopters with Minnie Mouse bows, failed to sell at a low estimate of $4 million.

Tuesday night sales at Christie’s brought in $298 million; the Wednesday night auction of modern and contemporary works at Sotheby’s, preceded by “The Now,” raised $297.2 million. That combined total of $595 million was 39 percent lower than the $971 million made in the London comparable in February 2014, when art sales were at a peak, according to Pi-eX.

Paintings of younger market favorites drew the most intense competition. After a lethargic 90-minute sale of 20 contemporary works streamed live from Shanghai to inaugurate the company’s new offices and galleries in mainland China, Christie’s kicked off its premier “20/21” sale featuring works by Jade Fadojutimi Shara Hughes, Amoako Boafo and Flora Yukhnovich. “You’re going to make me blush,” a 2017 Yukhnovich painting inspired by Fragonard’s “The Swing,” raised $2.6 million against a low estimate of $340,000.

The same names starred on Sotheby’s 21-lot “The Now” sale of works by trendy contemporary artists. Shara Hughes’ 2019 psychedelic floral painting “The Naked Lady” sold for a record $2.7 million, and a 2020 Yukhnovich work “Warm, Wet N’ Wild” rose to $3.6 million. which raised an auction high for the much sought-after British artist. It was estimated it would sell for $200,000.

Last year, works by artists under 40 fetched a record $450 million at auction. This marked a 275 percent increase from 2020, with 8,952 works in the category on offer, also a record according to Artprice, a France-based company that tracks international sales results.

“It’s dangerous,” said Samuel Selby, 21, a London-based collector of contemporary pieces. “I worry about how the auction houses are taking works by young artists and selling them for ridiculous prices.”

“In the long run it will be difficult to sustain,” Selby added.