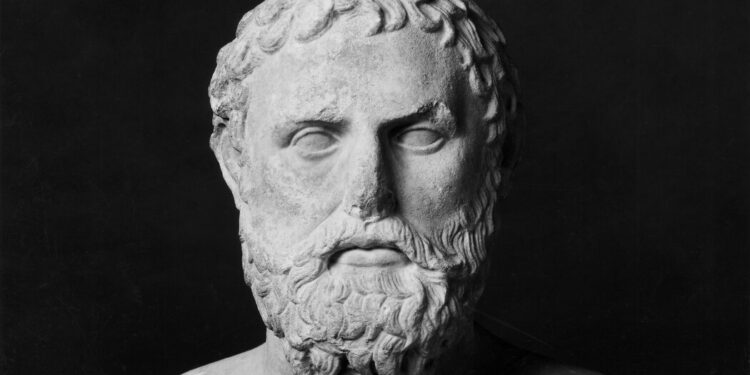 When the Nazis invaded Greece in 1941, Julius Ringel, a major general in the German army, played an active role in initiating illegal excavations on the island of Crete, where Minoan culture had flourished more than 3,000 years earlier.

The country was rich in artifacts from the cultural heritage of the island and Ringel, often aided by his troops, transported all kinds of ceramics, vases, pieces of sculpture, some for his own profit and some to send back to German museums as the spoils of war.

Ringel, commander of the Fifth Mountain Division, also looted ancient treasures that had already been discovered. He seized antiquities from the Villa Ariadne, the former home of British archaeologist Sir Arthur Evans, which he converted into the division’s headquarters. He stole others from a locked room in the ancient palace of Knossos, a five-acre archaeological site that experts say was the center of Minoan culture.

“Army officers like Ringel were not only excavating and looting antiquities for personal wealth, but they were also responsible for destroying antiquities in Crete, Macedonia, Tiryns, Assini and Samos,” said Vassilios Petrakos, a scholar who is curator of antiquities. and general secretary of the Archaeological Society of Athens.

While Indiana Jones’ cinematic exploits in the 1980s painted a popular, fictionalized portrayal of a Nazi lust for antiquities, the art world, understandably, has paid considerably more attention to the confiscation of art from Jews.

But the topic of the Nazi role in looting antiquities is attracting increasing attention, in part through the work of scientists unraveling the mysteries of what happened to the objects excavated or seized eight decades ago.

Last fall, for example, was published “The Past in Shackles,” a five-part study on the looting of antiquities in Greece during World War II, written by Petrakos.

“Research has intensified dramatically in many countries, including the United States, Germany, Italy, France, Poland and Greece,” said Irene Bald Romano, a professor of anthropology at the University of Arizona and curator of Mediterranean Archeology at the Arizona State Museum.

Symposia and lectures on the Nazi looting of antiquities have been held in several cities in recent years, including one by the College Art Association, which presented a panel on the subject at its annual conference last February.

“The studies that have been done so far are actually making the subject a little bit superficial,” Romano said in a telephone interview.

Romano is co-editor of the forthcoming “The Fate of Antiquities in the Nazi Era,” a special online issue of RIHA, the journal of the International Association of Research Institutes in the History of Art, which will be produced in conjunction with the Getty Research Institute and the Central Institute of Art History in Munich. The issue is expected to be released later this year.

“Antiquities have not been given the kind of in-depth investigation they deserve into the fate of Greek, Roman, Byzantine, Etruscan, Near Eastern and Egyptian antiquities stolen by the Nazis,” said Claire Lyons, curator of antiquities at the Getty Museum. “We need to pay more attention to World War II.”

The passage of time has made it difficult for scholars today to quantify the magnitude of the looting of antiquities that took place during World War II, whether from Greece, Italy or the Middle East, primarily Egypt.

“A full record of what was stolen does not exist and is no longer possible,” Petrakos said, referring to the situation in Greece. “The looting was carried out by the Germans and Italian soldiers who robbed museums and finds from the excavations. We don’t even know how many objects were found in those excavations.”

Tracking items is complicated by the fact that the looting took place at a time when the antiques market was thriving, especially in Germany, Switzerland and France, particularly in occupied Paris.

Today, experts say, Germany is responding quite well to claims for repatriation of looted antiquities, although it’s not clear if some still reside in its museums, as it can be so difficult to determine the full histories of ancient artifacts.

“The Germans have been very open about their collections, creating databases to make the information and archives of their collections accessible, doing provenance research in public museums and restitution of many works of art,” Romano said. “The situation is not perfect, but Germany has a high standard for museums regarding provenance issues, especially during the Nazi period.”

While small excavations were taking place under German supervision all over Greece, there were major excavations in the Thessaly region of northern Greece, Petrakos said. The excavations in Thessaly, he said, were organized by Alfred Rosenberg, the Nazi theorist, who headed the Einsatzstab Reichsleiter Rosenberg, which looted art, archives and libraries across Europe.

Heinrich Himmler, the head of the Gestapo and the SS, also began excavations in Greece under the auspices of his organization Ahnenerbe (Ancestral Heritage), with the aim of proving that Germans were part of an Aryan race and the heirs of ancient Greek culture. .

In Italy, some antiquities were exported to Germany under the direct authority of Mussolini. In Greece, in anticipation of the Nazi invasion in April 1941, museums began hiding objects six months earlier. Some works were placed in caves, crypts or buried in gardens to protect them from bombing and looting. Some statues were placed horizontally in trenches, which were filled with sand and sealed with cement. Gold pieces and museum catalogs, seen as valuable inventories of what the institutions had, were sent to the vaults of the Bank of Greece.

“Hiding antiquities was only successful for the great museums, those in Athens, Olympia, Delphi, Thessaloniki and Chalkis,” Petrakos said. “The smaller museums, except Nafplion’s, were not well protected and many antiquities were robbed.”

Eleni Pipelia, an archaeologist with the Greek Ministry of Culture, said a sculptor she knew told her that during the war she had made counterfeit antiquities and sold them to the occupying Germans in an effort to meet their need for antiquities. take home and raise money. money for the resistance.

Another hero of the preservation of Greek antiquities was Nikolaos Platon, the director of the Archaeological Museum of Heraklion in Crete, who was known, at some personal risk, to squabble with the Germans to prevent their looting.

Platon, who died in 1992, kept an inventory of the artifacts Ringel had brought from the Heraklion Museum. According to Georgia Flouda, the museum’s curator of Prehistoric and Minoan Antiquities, the University of Graz in Austria, based in part on Platon’s research and reporting, returned 26 antiquities to the museum that had been occupied by Ringel.

One institution, the Pfahlbau Museum in Unteruhldingen, has returned more than 13,000 artifacts taken from Thessaly – pottery fragments, small clay figures, stone tools, animal bones, excavation documents and photographs, which are now in the storage rooms of the National Archaeological Museum in Athens, according to Kostas Nikolentzos, head of the museum’s Department of Prehistoric Egyptian, Cypriot and Near Eastern Antiquities.

“The return started in 1951 and was completed in 2014,” he said. The items have not been put on public display, he said, in part because so many were in poor condition at the time of their dig.

dr. Maria Lagogianni-Georgakarakos, director emeritus of the museum, said the length of the repatriation process was affected by the division of Germany at the end of the war. “Documents and antiquities were scattered across various locations in East and West Germany,” she said. “The director of the Pfahlbau Museum explained that it took two decades to complete the research on the origin of the antiquities.”

The focus on anti-Nazi looting comes as museums around the world come under increasing pressure to rate items originally acquired by settlers and occupiers in eras well before World War II.

“Greece has been robbed since the Persian Wars,” Petrakos said.

Elizabeth Marlowe, an associate professor of ancient and medieval art at Colgate University and an expert on the looting and repatriation of antiquities, said: “The British Museum, as well as many national European museums, are full of objects that have been found under various conditions. seized from colonial areas and other European spheres of influence around the world.”

As antiquities looted by the Nazis have been repatriated or returned to their original owners, many have been sold or donated to major museums around the world.

The Getty has two antiquities — a bronze statuette of a woman and a carnelian, which were returned after they were sold to a merchant who bought works for Hitler, according to Lyons, the museum’s curator of antiquities. The works are now on display at the Getty Villa.

Victoria Reed, the curator for provenance at the Museum of Fine Arts Boston, said she had discovered the museum has three classical sculptures that were returned to a collector after they were confiscated by the Nazis and then returned — a portrait bust of a statesman or philosopher and a young satyr, both now in storage, and a relief sculpture, on display.

“Unlike old master paintings, many antiquities are extremely difficult to examine,” she said. “They are not attributable to any particular artist and criteria including a descriptive title, dimensions and circumstances can change dramatically in a short period of time, with losses or additions.”

But Reed said the investigation is getting easier. “Many books and catalogs are increasingly accessible through online digitization services. The University of Heidelberg, the Getty Research Institute and the Berlin State Museums have collaborated to make available the contents of thousands of auction catalogs from Germany, Austria and Switzerland. Photo archives and digitized archives of Nazi and allied organizations are available online.”

Flouda, the curator of the Heraklion Museum who has been researching German excavations in Crete, said she is concerned that those following what happened to looted antiquities still do not have full access to research conducted by some German and Austrian authorities. scholars.

“We do not have all the evidence and we are not always able to know which documents are hidden in Germany and Austria,” she said. “But very often new documents come forward and we cannot rule out the possibility that there have been more excavations that we are not aware of.”