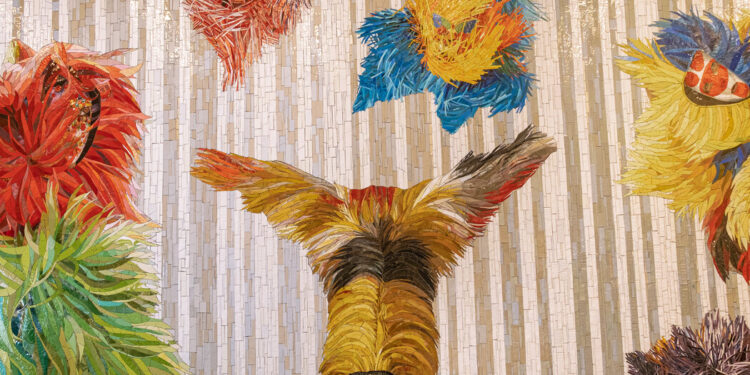 For an artist best known for “Soundsuits” that produce a variety of percussive effects when worn, Nick Cave’s public project, “Each One, Every One, Equal All,” has found a suitably noisy home on the subway. from New York.

Earlier this month, during a preview of the completed project, a saxophone echoed through the tunnels of Times Square and the 42 Street subway station, the sound nearly drowned out by the heaving clatter and roar of trains. Here, the artist’s wearable works, merging dance and sculpture, are dramatically rendered in mosaic tile across nearly 4,600 square feet, spanning three adjacent underground sites – the first phase was completed last year – making this the largest project to date. has been completed in the New York City Transit system.

I admit I was skeptical at first about how Cave’s wearable sculptures could be effectively translated into mosaic glass. I once heard Cave tick off the inspiration for a suit by saying that he was thinking of the shapes of a miter (like a bishop might wear), a condom, and a squire’s robes—disparate sources suggesting devotion and power, sex and care, hate and terror. He has the gift of combining the idiosyncratic and the mundane, the painful and the ugly, and on the other to create something cheerful and beautiful.

Cave’s Soundsuits share the strangely recognizable, friendly monster energy of Jim Henson’s Muppets, if the puppets were influenced by the traditions of African dance, ball culture and New Orleans Carnival. The variety of their textures and materials accounts for much of their strength – from airy faux fur in a rainbow of colors to coats of thumping porcupine-like brown twigs. This range of plumage and their changing visual and auditory characteristics are partly why the Soundsuits remain interesting after 30 years and several hundred examples later. In the metro project, fur, sticks, hair extensions, sequins, buttons, embroidery, festive masks and even birds and flowers are miraculously and convincingly realized by the glassware of Franz Mayer from Munich.

This marks a great moment when Nick Cave’s three-dimensional work appears in the two-dimensional urban public space. The unveiling at the Times Square-42nd Street station begins almost simultaneously with a major presentation of Cave’s work in his hometown of Chicago. Video of a choreographed performance of his Soundsuits will illuminate the 2.5-acre facade of the building formerly known as the Merchandise Mart (now known as “the MART”), which sits prominently across the Chicago River from the loop in the center. Also on May 14, the Museum of Contemporary Art, Chicago, opened “Nick Cave: Forothermore,” its first career retrospective.

In New York, the best place to start the underground show is “Every One,” the project’s largest and first completed phase, which opened in September 2021. Proceed to 42nd Street – Bryant Park/Fifth Avenue Station and travel to the B , D, F and M train platforms deep inside to reach the new pedestrian tunnel to the Times Square shuttle. As you go up the stairs to the connector, Cave’s figures will appear in front of you and above you.

A clever trick of perspective collapses the space between the walkway and Cave’s procession on the wall on the right. While most of the figures are depicted on a human scale, some of the more than two dozen have been magnified so that they seem to invade your space, as if you were bumping into a fellow commuter in your peripheral field of view. In an extreme example, a fragment of a torso, just below outstretched arms, extends for about 6 meters. Midway through the corridor, the procession is interrupted by a series of screens showing a 3-minute video work every 15 minutes showing the movements of dancers wearing the tiled Soundsuits on adjacent walls

I used to work in Midtown and take the shuttle often, but haven’t been back in years. The platform was unrecognizable to me, a huge improvement, with art where I previously only remember I-beams of corroded steel. On the way to the exit under One Times Square, “Equal All” presents a regiment of figures standing in ordered bays, compiling a life-size catalog of some of Cave’s most remarkable sculptures translated into tile work, like a feathered fur head atop a body whole covered with ivory buttons with red thread.

Two are in the form of worn-out mobiles: in the first, the legs and torso act like the trunk of a tree, and a headdress envelops the rest in a series of branches that housed an aviary of porcelain birds. In the second, the branched headdress contains a collection of old-fashioned toy metal spinning tops and noisemakers. Elsewhere, a figure resembles a humanoid bouquet of flowers. Another wears a suit composed entirely of brown sticks, the head hidden from a dark hole that looks like a periscope made from a tree trunk. Everything in tiles.

Across the street and at the exit to the skyscrapers and flashing lights of One Times Square, ‘Each One’ picks up the horizontal movement of ‘Every One’ and shifts it vertically in an explosion of kinetic energy. The MTA claims that the 14.5-foot mosaic wall refers to the New Year’s ball that falls directly above it — but more practically, “Any” prepares an exhilarating rider for the sensory overload that awaits every other day of the year.

The Soundsuits appear to be in motion, creating visual vortices, which alternately spin and rise or fall, conveying different weights and textures of the figures’ pelts and exaggerating the wearer’s movements. Even in facsimile tiles they feel more alive than when I have seen the actual sculptures on mannequins in the near silence of museums and galleries.

How do they relate to the many works of art in the New York subway system? Near Cave’s sprawling project, you can find Roy Lichtenstein’s “Times Square Mural,” featuring a comic-futuristic subway car in Dick Tracy yellow, in a geometric tunnel that nods to Piet Mondrian. In porcelain enamel, installed in 2002, it feels like a bit of the Museum of Modern Art on loan to the MTA. It is large compared to a painting, but in the context of a station it gets lost. Cave’s project is much more effective at making his presence known.

His cheerful figures contrast with ‘The Revelers’, a 2008 diffuse mosaic by Jane Dickson along the underground path from the Port Authority to Times Square Station. Her figures, both generic and idealized as characters from a Norman Rockwell painting, wear hats and horns that also nod to the New Year’s festivities. But they don’t look much like subway riders and their party seems stuck in another time. There’s something otherworldly about Cave’s friendly monsters: there’s a natural affinity with the underground mob in their ostentatious fashion and flâneur-esque anonymity. “Everyone, everyone, all equal” feels like a necessary correction, in the midst of the noise and bustle.