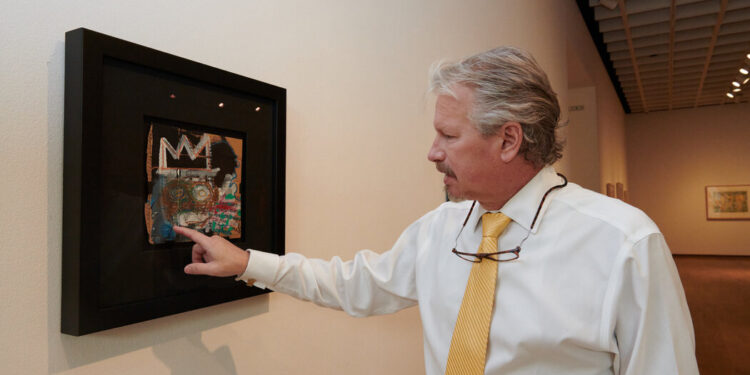 Aaron De Groft, the director and chief executive of the Orlando Museum of Art, was removed from office Tuesday night, just days after the Federal Bureau of Investigation raided the museum and seized 25 works attributed to Jean-Michel. Basquiat, but whose authenticity is being questioned.

Board members met early Tuesday to discuss the fallout from Friday’s FBI raid. The meeting ended with the board’s decision to fire De Groft, according to museum employees who asked for anonymity because they had been warned that anyone talking to the news media would be terminated.

De Groft did not immediately respond to a request for comment.

The chairman of the museum’s board of directors, Cynthia Brumback, said in a statement that the museum’s administrators were “extremely concerned” about several issues related to the “Heroes & Monsters: Jean-Michel Basquiat” exhibit.

Among them, she said in the statement, was “the recent disclosure of an inappropriate email correspondence sent to academia regarding the authentication of some of the artworks in the exhibition.”

DailyExpertNews reported last week that an affidavit filed to secure the search warrant, signed by FBI special agent Elizabeth Rivas, quoted an email in which De Groft appeared to threaten an academic who had been hired. by the DailyExpertNews. owners of the artworks to rate them, and who later expressed doubts about being associated with the exhibition.

The expert was identified in the affidavit only as “Expert-2,” but an associate professor of art at the University of Maryland, Jordana Moore Saggese, confirmed to The Times that she was “Expert-2.”

Saggese, who received $60,000 for her written report, contacted the museum and asked her not to associate her name with the exhibit, the affidavit said. At that point, the affidavit said, De Groft sent her an email despising her and threatening to disclose the payment and share details about it with her employer.

“Do you want us to go there, do you have $60 grand to write this?” De Groft wrote, according to the affidavit. “Okay then. Shut up. You took the money. Stop being holier than you.” Still insisting the paintings were real, De Groft then threatened to share the details of that payment with the university: “Do your academic thing and stay at your limited job.”

“We have launched an official process to address these matters as they are inconsistent with the values ​​of this institution, our business standards and our standards of conduct,” Brumback said in the statement.

The June 24 FBI raid took place just days before the scheduled closure of the Basquiat exhibit on June 30, after which the works would be exhibited in Italy.

The artworks in the “Heroes & Monsters” exhibit, which opened in February, are believed to have been recovered by the museum and their owners in 2012 in a storage facility in Los Angeles.

The Times reported that one of the artworks on display was painted on the back of a cardboard shipping box with the instruction “Align top of FedEx shipping label here,” in a font that, according to a designer working for Federal Express, hadn’t been used until 1994 — six years after Basquiat’s death.

The search statement said that “forensic information indicates that the cardboard on which a painting is made contains a font created in 1994, after Basquiat’s death, which has cast doubt on the authenticity of at least one piece.”

Both De Groft and the owners of the artworks had said the works had been created by Basquiat in 1982 and sold for $5,000 to a now-deceased television screenwriter, Thad Mumford, who they said had put them in a storage room and she was to forget. They were discovered when the contents of the storage unit were seized for non-payment of rent and put up for auction in 2012, they said.

But the affidavit says that in 2017, a year before his death, Mumford signed a statement in the presence of federal agents stating that “I did not meet Jean-Michel Basquiat at any time in the 1980s or at any other time, and at no time have I bought or bought paintings from him.”