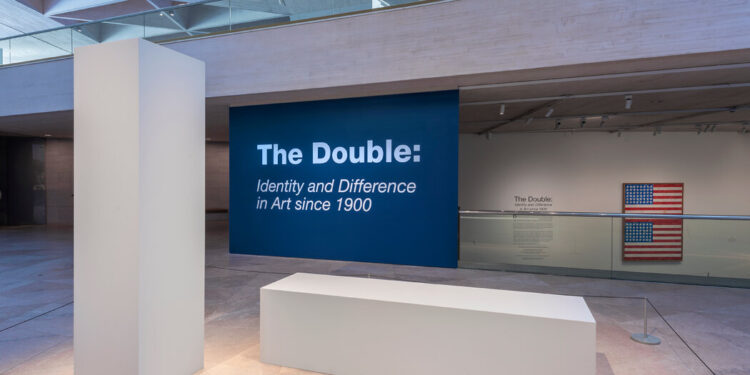 At the very beginning of “The Double: Identity and Difference in Art Since 1900,” a dazzling new show at the National Gallery, is an 8-foot-tall plywood column, painted solid gray with no ornamentation. On its own, it would just look architectural. But it’s not the only one: an identical column lies next to it on the floor, and the pair – now inevitably understood as one standing figure and the other, lying – comes to represent the basic sociability of all people. The twin figures in this 1961 piece by Robert Morris, “Two Columns,” can represent all of humanity.

The 101 modern and contemporary artists in “The Double” prove the vital social impact of twoness.

Or how about another way to get on this show?

At the very end of “The Double: Identity and Difference in Art Since 1900,” a dazzling new show at the National Gallery, is a cracked glass pane with no ornamentation. If it were on its own, it would speak of the vulnerability that is the foundation of the world we live in. But it’s not all: there’s another panel next to it, miraculously cracked along the same lines as the first. One was broken with a hammer; the cracks of the other were cut in perfect imitation of the first. The link in this 1998 piece, “Parallel Lives,” by Jorge Macchi, explores our basic need to impose meaning and order on the world by copying parts of it.

The 101 modern and contemporary artists in “The Double” prove the vital mental impact of twoness.

Come to this Washington, DC exhibition, from both sides, and with its more than 120 works from any number of angles, and you’ll be convinced that doubling – equality, but also the difference with which it is tense – is a basic feature of the art of our time, and also one of the most fascinating subjects. James Meyer, the National Gallery’s curator of modern art, shows how two similar things side by side mean something different than one big statement. They often mean more.

Meyer’s curator reflects the twinning in the works on display: instead of finding one powerful, illuminating take on the theme, “The Double” shows how duplication, as a single concept, plays out in more than one dimension.

Twoness, which seems so stable and basic, can speak of instability. In the collage of a face of Picasso from 1912 in this show, a doubled nose and ear seem to cast doubt on the entire project of orderly representation. Can we really say that a single image can capture what our chaotic world is all about? Doesn’t an image that stutters do better?

And yet, at the same time, Picasso’s jitters are nowhere to be found in an icon of abstraction that is also twofold. It’s hard to imagine a better image of order than Kazimir Malevich’s 1923 drawing of a few squares: instead of questioning art, it seems to represent the most stable essence of what art can be. After all, two points define the line that forms the basis of the drawing, and two parts provide the most minimal composition in paint.

The absolute order signaled by duplication can also come across as a half-crazy compulsion: When certain performers on this show see double, you want to breath-analyze them.

About ten years ago the artist Vija Celmins took an old blackboard, scratched and worn and smeared with chalk, and had a perfect copy made in every crack and stain. There’s no telling which board came first when you saw them in “The Double,” but who can resist the temptation to try? While our brains are built around detecting differences — that’s what distinguishes a signal from noise — it turns out that perfect duplication can also be hugely noticeable, if only because it’s so rarely found.

The preciousness, even fragility, of absolute equality became clear to me in a piece by Roni Horn. Her 1986 “Things That Happen Again” presents two identical cones, each about the size of a basset hound, immaculately crafted from solid brass. The industrial perfection of their doubling is part of their appeal, as I realized when a visitor left a large, greasy handprint on the shiny copper of one, destroying the match between the twins. Employees at the National Gallery were distraught, but the damage, which was soon repaired, only reinforced how important the perfect identity was to the effect of the work.

The question of equality – or is it the problem of difference? – forms the core of the most fascinating double work I know: the two canvases of Robert Rauschenberg’s “Factum I” and “Factum II”, both of which are in “The Double”. At some point in 1957, about the height of America’s craze for the one-off outpourings of Abstract Expressionism, Rauschenberg wanted to show us a single outpouring—twice. Each “personal” sign he wiped on one canvas, he then repeated as identically as he could on the other. If he put two identical press images of President Eisenhower on the surface of one work, he also placed them in the other, doubling the duplication that our era of mass reproduction had allowed.

Rauschenberg had recently started out as a gay man when he made his two ‘Factums’. (Jasper Johns, his partner at the time, has some of his signature flags on the show.) It’s hard not to feel that Rauschenberg’s sexuality was the basis for his major research into duplication and inequality.

Other powerful works in “The Double” are by gay artists who take equality more directly.

Photos and a video of the duo known as Gilbert & George – Gilbert Prousch and George Passmore, who have lived and made art together in London since 1967 – show them in the matching bank teller’s suits that are still their trademark to this day. to be. Over the years, they’ve turned the gender match that torments homophobes into a proud feature of their identity: they inhabit the “gay” into “gay,” although it’s usually thrown at gay men as a slur. But even if Gilbert & George use art to confirm their couple, their grey-flannel camouflage suggests it comes with a loss of individual presence. (An excellent catalog essay by Julia Bryan-Wilson challenges the idea that queerness has a lot to do with being “the same,” except in the minds of concerned straights.)

‘The Double’ features artists of color who have an equally troubled relationship with the ‘identity and difference’ mentioned in the exhibition’s subtitle. A 2012 piece by Glenn Ligon presents the word “America” ​​written in neon, once right side up, in glowing white letters, and below that upside down in black letters that only light up from behind. Ligon captures how blackness in this country is always seen as a dark side of white, but he introduces a wrinkle: in black, the country’s name reads normally; in its white text, the letters rotate backwards halfway through the word. Whiteness comes across as the source of our confusion, while American blackness seems to know where it stands.

If duality takes place in so many artistic dimensions – racial, sexual, aesthetic, cognitive – it may be because art is more fundamental than even this show shows: it turns out that even most of the separate photos are twins. An older piece in the National Gallery would have made clear the high stakes in James Meyer’s theme. Joseph Wright’s “The Corinthian Maid,” painted in the 1780s, illustrates an antique story that explained the origins of art in terms of duplication: Once upon a time, when a young woman’s lover was about to leave town, he followed she art the outline of his shadow on a wall to still have him next to her once he was gone; all the pictures followed from then on, the story says, as they worked to “make absent things present.”

That tall tale takes on something good: Doubling the things that matter to us has been central to art ever since we put bison on cave walls.