Tomás Saraceno: Following the life of spiders in the sky 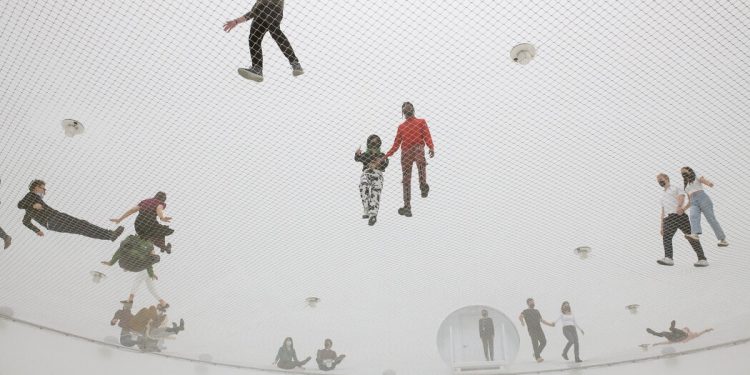 The Shed has pulled out all the stops for the multitasking Tomás Saraceno — a visionary Argentine artist and environmental celebrity who is among the world’s greatest spider whisperers — by spinning three of its four public spaces, or roughly 28,000 square feet. And Saraceno seems to have returned the favor by setting up a revealing, if high-profile, overview of his work in makeshift galleries, as well as two inspiring installations elsewhere in the building. The whole thing is titled “Tomás Saraceno: Particular Matter(s).”

The most ambitious of these is a Shed commission that can literally leave you feeling weak in the knees. “Free the Air: How to Hear the Universe in a Spider/Web” is essentially the pièce de résistance of this entire venture. More Later.

The smaller installation, “Museo Aero Solar”, which can be seen in a third large room, revolves around a huge sphere that resembles a tent and is in fact a grounded balloon made of plastic shopping bags – it looks fantastic, like a colorful translucent crazy quilt and visitors can pop in and walk around. It is one of the projects of the Aerocene Foundation, a global crowdsourced group led by Saraceno and committed to developing fuel-free flying – powered only by the movements of the wind and the sun.

The exhibition and installations together form something like the entire Saraceno: partly education; share collaboration; partly out-of-body experience, with different kinds of beauty laced through it. “Particular Matter(s)” has been tagged as the largest showcase of the artist’s work in the United States. The whole is organized by Emma Enderby, the curator of the Shed in general, with Alessandra Gómez and Adeze Wilford, the assistant curators. The Shed display is usefully complemented by Saraceno’s show at its longtime representative, the Tanya Bonakdar Gallery in Chelsea.

Saraceno is not so much an artist as a polymath with a mission, and his efforts often resemble science more than art. The Shed’s various displays reflect, to varying degrees, his activities as an arachnophile, artist, architect, activist, teacher, musician, environmentalist, and social justice fighter for clean air. Its overarching purpose can be summed up simply as giving people a good life. This means that they must understand that they are not the top of a pyramid of power in what is called the Anthropocene era, but exist on a horizontal plane with all non-humans, to which they must be sensitive and from which they have much to offer. have. to learn. And they exist in what Saraceno prefers to call the Aerocene era, which requires interspecies collaboration and clean air.

That said, you might wonder how anyone with Saraceno’s acute environmental consciousness would allow their work to be displayed in the Shed. Granted, the building, or at least the exterior, is arguably the best part of Hudson Yards’ civil catastrophe and failure, arguably the worst of this city’s many recent self-inflicted architectural wounds.

Saraceno’s quest is inspired by spiders and the ingenious basis of their aerial lifestyle: the multifunctional webs that provide shelter, protection, food and, when they vibrate, a means of communication. Spider webs also served as models for floating sculptures. Consisting of translucent webs and spheres, these have become Saraceno’s best-known work, of which “Free the Air” is the latest example.

The exhibition portion of “Tomas Saraceno Particular Matter(s)” begins with the quiet spectacle of his collaborations with spiders: in a darkened gallery, seven plexiglass boxes each containing several different connected webs, all glistening white. Each web is built by a different species of spider on a sturdy wireframe in Saraceno’s studio, where it follows their progress, taking out one species and introducing another at its discretion. Especially after dark, these pale, ghostly crystalline structures make you realize how much we already owe spiders, as their webs set early humans precedents for architecture and textiles.

To the amateur eye, the webs of the various species here are generally divided into grids, often fan-like expanses, pillow-like canopies, and insane masses of strands that can resemble tossed pick-up sticks suspended in the air. The combinations are stunning, reminiscent of modern architecture and – because of the abrupt shifts in pattern and rhythm – brushstrokes or music. Information about the spiders that worked in each display case (how many members of which species and how long) can unfortunately only be found on a label outside the gallery; it should be available on a handout.

From here, the theme shifts to air pollution, which endangers spiders and humans alike, especially the infinitely small, breathable carbon granules called particulate matter. In one corner is ‘Arachnomancy’, a stack of tarot cards printed with fine dust ink that pays tribute to Cameroon’s spider soothsayers.

“We Do Not All Breathe the Same Air,” another Shed commission, spanning three nearby walls, grapples with air pollution inequalities, which according to Harriet A. Washington, author of “Medical Apartheid,” divide more race than class. who has written about environmental racism and contributed an essay to the catalog. The work consists of seven large sheets of paper, framed, measuring pollution over two years at various locations in seven states. The degree of pollution is registered in rows of dots, ranging from almost invisible to very dark. They look pretty minimalistic, but in stark terms illustrate this country’s inequalities in clean air.

The last two galleries of the show return to the aesthetics of the webs. “Sounding the Air” consists of five long, thick strands made from multiple silk threads of cobwebs. Lights aimed at the strands cause them to wave; via camera and computer these movements are translated into sounds that resemble avant-garde music. In “How to entangle the universe of a spider/web?” a laser repeatedly scans through an extended stretch of cobwebs. The result is a seemingly cosmic, shifting red splendor. His message? Spider webs are much more complicated than suggested in the show’s opening gallery.

In the final gallery, “A Thermodynamic Imaginary,” Saraceno uses large Plexiglas spheres, web-like wires and cords, small glass doodads and their shadows to evoke planetary motion and even a solar eclipse in a beautiful yet appallingly conventional installation. But a fascinating video playing on the left wall of this gallery allows us to glimpse the black aerosolar sculptures, which resemble three-dimensional kites; they are part of the “Museo Aero Solar” project being tested in Salinas Grandes in Argentina. It is an exciting sight to see the sculptures rising and away from the small figures on the ground.

If you’ve read the entire wall texts, you may find this exhibit a little difficult, but you may have learned a tremendous amount and may be a little more optimistic about the fate of the planet. It helps to know that tranquility awaits in the installation pieces, especially the soothing “Free the Air,” Saraceno’s large white orb (95 feet in diameter) that more or less ate up McCourt’s space. Inside his two is a pair of trampoline-like steel webs. The light space darkens, while visitors – sitting or lying – listen to and feel a 20-minute concert: the vibrations of a composition derived from registered movements of air particles. It can, in short, take you out of this world.

The show at Tanya Bonakdar, 521 West 21st Street, is in a sense a continuation of the Shed’s. Central to this are the installations made of black polyester rope for which Saraceno first became known. The stretchy ropes traverse the white space with elaborate spherical structures at their intersections. These resemble stars, snowflakes, magnified particles and of course cobwebs – equipped with live microphones connected to active speakers. Visitors are allowed to touch them, causing vibrations, like spiders in their web.

The sum of these two exhibits, but especially the one in the Shed, is a much deeper appreciation of what sparked Saraceno’s love of spiders. Whether you like these creatures or not, they help bring about a brighter future. 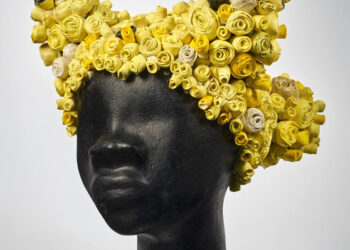 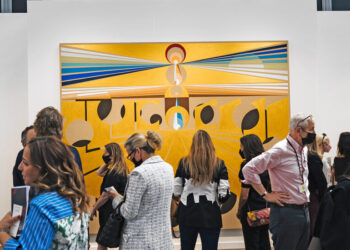 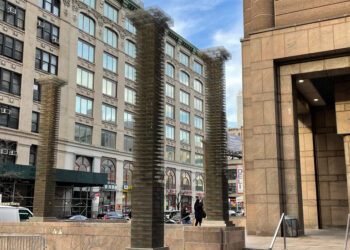 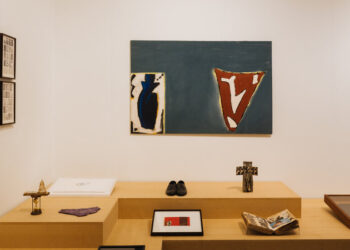 6 art fairs in NYC this weekend 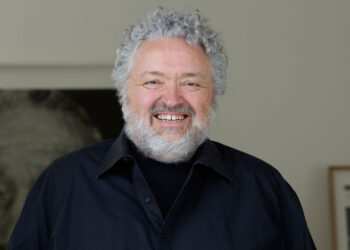