Trying to contain William Klein in one show isn’t easy 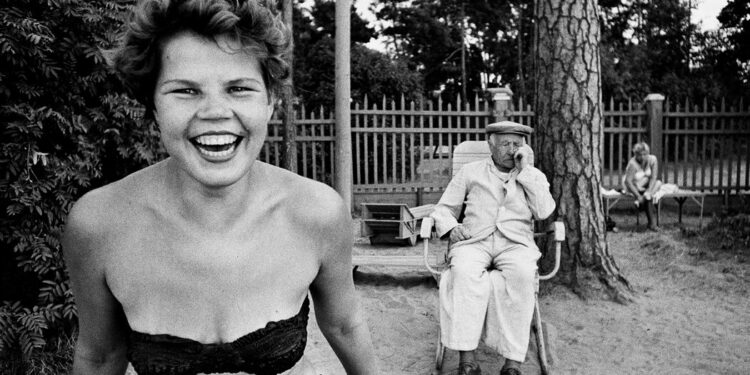 For 70 years, William Klein, a hugely innovative and influential photographer, has been taking photos, up close and personal, that break the conventions of technique and taste to pack the maximum punch. In “William Klein: YES,” a retrospective opening June 3 at the International Center of Photography, the first in his hometown since a smaller ICP exhibition in 1994, Klein, who is 94, excluded glass frames for his prints. He wants nothing to come between the image and the viewer.

A man of legendary charm, Klein seeks lively subjects that respond to his own vitality. In one of his best-known images, from 1959, a cheerful young Moscow woman, dressed in an unstylish Soviet bikini, virtually bursts out of the picture. Behind her, sleeping in a beach chair, lies an old man, handsomely dressed in a summer suit and beret, who might represent the sedate, proper style of photography that Klein was keeping his nose at.

Klein’s photos pushed the viewer into the action of the city with a rough jerk. “Gun 1, New York”, his most famous photo, taken in 1954, shows a fiercely grimacing little boy aiming the barrel of a gun directly at the camera. The hand and the weapon (presumably a toy, but not perceptible) loom large. A younger child watches with admiration. This photo is part of a series of little boys impersonating police and robbers, and can be said to foreshadow our current nightmare of youthful gun violence. In fact, it’s an image that, seen on its own, carries a sickening, nightmarish power within it.

Klein came to photography and filmmaking in a roundabout way. He moved to Paris on the GI Bill to study painting in 1948, finding a place with Fernand Léger. On his second day in town, he met Jeanne Florin and decided to stay. They soon married, a union that lasted until her death in 2005. Like Man Ray, another illustrious New Yorker who started out as a painter but made his most significant contributions as a photographer, Klein moved easily to Paris, where he befriended the artistic vanguard. from the city. A position of constant disruption suits him.