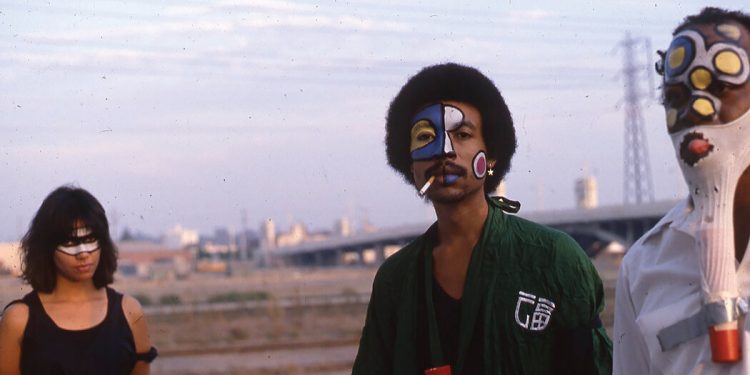 LOS ANGELES — “Two-Zone Transfer” opens with a photo of artist Ulysses Jenkins waiting for the bus. “Two-zone transfer,” he tells the driver as his coins jingle in the slot. The video ends as he disembarks. In between, however, the journey is a soothing tour of what Jenkins calls the “same old basic image problems” that have haunted African Americans from the beginning. In a smoky, surreal visitation, Jenkins encounters three black men dressed in dark suits, cotton gloves, and Richard Nixon and Gerald Ford masks smeared with shoe polish. They are minstrels and they bring a capsule history of minstrels to the popular entertainment world. “As far as we’re concerned,” says one, in a disorienting bit of racial cosplay, “your culture needs our interpretation.”

Jenkins disagrees. “Ulysses Jenkins: Without Your Interpretation” — the video artist’s first major museum retrospective, at the Hammer Museum after a sojourn at the Institute for Contemporary Art (ICA) in Philadelphia — argues that black culture needs no white interpretation at all. In fact, interpretation—more often than not offered, without understanding—is much of the same old problem of race in the United States.

‘Two-Zone Transfer’, made in 1979, is a good introduction to Jenkins’ loose and tight work. His big themes are all there: a two-zone transfer is a bus ticket, sure — but also a transition between realms of black and white; have and not have; hard-lit reality and vignetted dreams.

Born in Los Angeles in 1946, Jenkins has spent most of his life in Southern California, where he is duly recognized as an artist. He has taught at the University of California Irvine since 1993. “Without Your Interpretation” represents passing on the flame to a younger generation: curators Erin Christovale and Meg Onli write in the catalog that they both encountered Jenkins’ work in “Now Dig This ! Art & Black Los Angeles 1960-1980” hosted by Kellie Jones in 2011 (also in the Hammer) “Without Your Interpretation” aims to de-clutter Jenkins and bring it into national relevance.

A true aesthetic strap-hanger, Jenkins has long roamed the interstitial, awkward parts of the city. He began his career in the 1970s painting murals, including part of Judith F. Baca’s landmark “Great Wall of Los Angeles,” a half-mile mural in a North Hollywood flood channel. Later, with art-jazz happenings such as 1984’s “Without Your Interpretation” on the wharf of the old Pickle Works Building near the Los Angeles River, Jenkins would build on the understanding that urban margins were preparing stages for music, drama, and dance.

Jenkins’ work sharply criticizes the simplifications of mass media, but radiates the excitement of owning the means of production. His first videos were a kind of documentaries, shot with a Sony Portapak, a versatile home video system for the early years. “Remnants of the Watts Festival” (filmed in 1972/73 but only completed in 1980 due to its lack of access to editing equipment) combines concert footage of the band War performing at a commemoration of the 1965 Watts riots and penetrating interviews with festival organizers. This video appears in the Hammer alongside impressionist short films about the art of Charles White (1978) and David Hammons (1977/82). Likewise, Jenkins’ first scripted works, including “Two-Zone Transfer,” mix staged, costumed sequences with cinéma-vérité.

It seems obvious that Jenkins has been short-circuited by art history. Many of his ambient, experimental videos seem trapped in the moment they were made. But Jenkins also impressed by engaging with other SoCal artists – studying with Betye Saar and Chris Burden, mixing with David Hammons and Barbara T. Smith, working with Kerry James Marshall and Senga Nengudi, and members of Asco, the art collective in East Los Angeles. The curators include several examples of Jenkins’ synesthetic acumen, such as his 1987 production of Harry Gamboa’s absurdist teleplay “No Supper”, in which a Chicano family eats ideas for dinner; and his videography for choreographer Houston Conwill’s “Cake Walk” (filmed in 1983), a reference to the dance in which enslaved Africans secretly mock their masters.

“Two-Zone Transfer” was one of his last pieces that dealt directly with the way (white) movies and TV produce Blackness. After citing the issue, Jenkins focused his efforts on a community of like-minded people, looking for artists dug rabiesas he calls his juking, sudden mounting style.

In 1983, Jenkins founded the prolific video collective Othervisions. The results are often witty, sometimes clumsy, but synthesize image and identity in a way that reverberates in the era of Tik Tok. 1985’s “Peace and Anwar Sadat” may look like three cosmically stoned musicians jamming to green-screened infographics, stars and planets, and animated nuclear weapons — and it is — but the piece also pays deep tribute to the slain Egyptian leader. . In 1992, Jenkins and the band Othervisions patched Documenta 9 in Kassel, Germany, from an “electronic cafe” in Santa Monica, California. It’s hard to match the excitement of the contestants as a grainy, blurry portrait creeps through sub-Atlantic phone lines and across the screen, a system that, by today’s standards, seems practically homemade.

The exhibit meanders as it follows the self-proclaimed videogriot into the 21st century — but Jenkins has never really enjoyed the confines of white walls. The Hammer installation’s drifts and gaps take on a montage-like, doggeral quality of their own. From a framed snapshot of Jenkins during a 1967 student protest to a 2006 video comparing a flood-ravaged and neglected New Orleans to Sun Ra’s mythical “Planet X,” the show provides some social context, but the momentum remains to side to stay. of obscurity: presenting without interpretation. Jenkins ‘Video Griot Trilogy’, 1989-1991, is screened in the show’s far room; in the first episode, “Self-Divination”, the protagonist wanders through the parks and garbage dumps of Los Angeles, interspersed with shocking Nazi rally news and calming shots of a sand mandala. Likewise, the exhibition lets the viewer loose in the aesthetics of free jazz and afrofuturism without charting politics.

On the other hand, the general refusal to over-interpret the exhibit harks back to the eclipsed presidents in “Two-Zone Transfer.” The minstrel in European and North American society evolved as a parody – an unwitting interpretation – of the griot, the narrator and guide to West African culture. The oral, musical, performative tradition of the griot was able to survive the Middle Passage, when almost everything else was taken away. Minstrelsy is also the way white culture takes it.

Jenkins dramatizes this threat of such stereotyping in “Mass of Images” (1978). The black-and-white video begins as Jenkins, wearing sunglasses and a shiny, clear mask, stands up from behind a stack of televisions. “You’re just a mass of images you’ve come to know,” he says, “from years and years of TV shows.” Stills from “Birth of a Nation” and “Uncle Tom’s Cabin” fill the screen. He starts the poem again. “The hurting thing, the hidden pain, was written and bitten into your veins.” Jenkins jumps at the TVs with a sledgehammer — he’d love to break them, he says, but “they won’t let me.”

Jenkins turns to threaten the camera and staggers closer to the lens until his face blackens the shot. If he cannot undo the canon, dismantle the limiting, defining and interpreting ‘mass images’, perhaps he can make his own.

Ulysses Jenkins: Without your interpretation

Through May 15, The Hammer Museum, 10899 Wilshire Boulevard., Los Angeles; 310-443-7000; hammer.ucla.edu. “Ulysses Jenkins: Video Griot,” a collection of 12 of his videos, is featured on the Criterion Channel along with the Hammer exhibit.