When ‘New Art’ Made New York the Cultural Capital 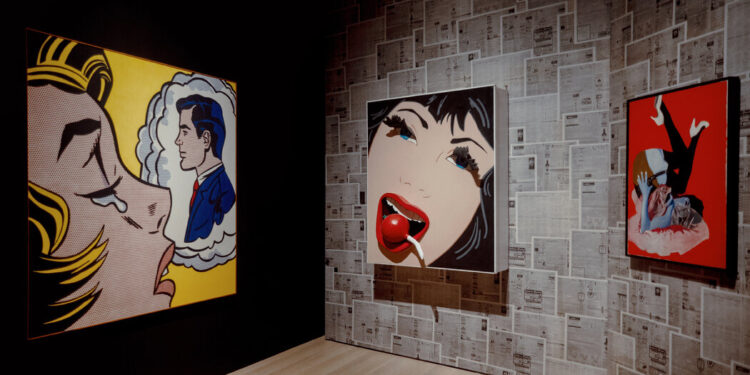 When I was a kid in the early 1960s, my Eisenhower Republican physician father always had the latest copies of his favorite subscription publications at his home office: Time, Life, the Journal of the American Medical Association, and Mad Magazine.

To me, Time and Life made him an engaged citizen; JAMA, as a conscientious professional. But crazy? With his Alfred E. Neuman mascot and anarchic, holy cow-skewer humor? It signaled a very different kind of reader, one with a penchant for cultural madness, similar to the one I was developing.

That flavor ran through the manic era that was the early ’60s, a pivotal moment between Cold War and Vietnam, Civil Rights and Black Power, repression and liberation; beatnik and hippie; Ab Ex and Pop. It’s the era documented in the clever, split-level show called “New York: 1962-1964” at the Jewish Museum, an institution that, we learn, played a major role in the cultural shifts.

This overview of nearly 300 artworks and ephemera, in a soft design by Selldorf Architects, begins by placing us right in the middle of Manhattan with a mural-sized photograph of foot traffic on West 8th Street in Greenwich Village. With a neon liquor store sign overhead and a soundtrack of urban noise, you’ve got a classic New York City scene that can always be.

It gets time specific in the first gallery with a selection of photos of robbers from the early ’60s: Diane Arbus on the city’s waterfront, Lou Bernstein at the Bowery, Leonard Freed in Harlem, Frederick Kelly on the subway and Garry Winogrand at the Central Park Zoo. There’s also a soundtrack here, taken from a vintage jukebox with a selection of periods, and what a new beginning in pop music this was: Bob Dylan, Chubby Checker, John Coltrane, the Shangri-Las.

In the center of the gallery we see a skinny, tilting scarecrow from a sculpture made from construction debris by a 20-year-old artist named Mark di Suvero. On the wall behind it hangs a hyper-realistic close-up painting, by Harold Stevenson, of a staring eye. A harrowing niche nearby frames a roughly hand-formed, plaster-and-paint relief of female underwear by a young Claes Oldenburg.

All three artists operated outside the Ab-Ex world. Stevenson (1929-2018) was a friend of another young realist, Andy Warhol, and an early Factory habitué. Oldenburg, who died this month at age 93, took his photos — shoes, sandwiches, street signs — of things in his East Village neighborhood. Di Suvero, part of a new generation of loft homes, lived far in the center of Wall Street, where he scoured the streets at night for materials.

And not far from his studio at South Street Seaport, in Coenties Slip, was a small community of artists who, out of economic necessity as well as self-interest, had distanced themselves from the art establishment. These outliers were Robert Indiana, Ellsworth Kelly, Agnes Martin, James Rosenquist, and Lenore Tawney, and, who formed their own community in the area, Jasper Johns and Robert Rauschenberg. All are represented on the show, Johns and Rauschenberg extensively. And they were all as different from each other as from the dominant styles of their time.

It wasn’t long before Uptown knocked, with the Jewish Museum leading the institutional pack. A new director, Alan Solomon, arrived in 1962 and was determined to make the museum a pioneer in introducing what he called “the new art,” and he wasted not a minute.

In 1963 he gave Rauschenberg his first retrospective. The following year, he did the same for Jasper Johns. Also in 1964, on behalf of the United States government, he took a substantial group exhibition of young American artists to the Venice Biennale, where he scored a hit that tipped the balance of power of the art world from Europe to New York.

The Jewish Museum could have easily packaged “New York: 1962-1964” as a small, tight institutional narrative. Instead, it makes the story part of a much larger story, with a grand view that must be attributed to its original organizer, Italian curator Germano Celant, who died of complications from Covid in 2020. (The exhibition is billed as a collaboration). between his studio and a team from the Jewish Museum consisting of Claudia Gould, director; Darsie Alexander, chief curator; Sam Sackeroff, associate curator; and Kristina Parsons, curatorial assistant.)

The greater history, multidisciplinary and largely political, unfolds chronologically on the second floor of the show. In 1962, the Cuban Missile Crisis and Marilyn Monroe’s suicide shook the country in different ways and to varying degrees. The 1963 March on Washington for Jobs and Freedom was a lofty moment, and the show gives it, and the civil rights movement itself, wide coverage, through archival material and work produced by artists and collectives – the Spiral group, the Kamoinge Workshop – inspired by the movement.

Then, just a few months later, the country experienced a head-on psychic crash with the assassination of John F. Kennedy. And here, the pre-digital popular press becomes the primary expressive voice in gallery displays of newspapers, magazine covers, and a video clip of Walter Cronkite’s stifled on-air announcement of the president’s death.

Through it all, much of Solomon’s “new art” was at work, hooked up to the manic national mood. The show ends with an extended shout-out to the curator through documentation of the triumph of the Venice Biennale in 1964, when Rauschenberg became the first American to win his top prize, the Golden Lion, in painting. In the context of ‘New York: 1962-1964’, the event in Venice even feels anticlimactic. It’s the brutality of much of the art that preceded it, and the political issues that this work raises, that keeps you looking and thinking.

Solomon’s group exhibition in Venice — intended, he said, “to impress Europeans with the diversity of American art” — had no women, but Celant’s includes several. Materially rich assemblages by Nancy Grossman and Carolee Schneemann seen here are more interesting to look at and think about than almost anything around them. (Schneemann had to wait decades for her own moment in Venice; she won the Biennale’s Golden Lion for Lifetime Achievement in 2017.)

And in an exhibit of what could be, among other things, a mini-survey of the rise of pop art, the most dynamic of pop imagery is Marjorie Strider’s big, bold “Girl with a Radish.” The relief painting originally appeared in a 1964 Pace Gallery exhibition called “The First International Girlie Show,” which, in keeping with the twisted irony that has always shaped the market, featured work by just two women, Strider and Rosalyn Drexler, among the ten artists. (Clearly intent on restoring this balance, Celant also included Drexler’s piece, an antique self-portrait and, in other parts of the show, works by Lee Bontecou, ​​Chryssa, Sally Hazelet Drummond, Martha Edelheit, May Stevens, and Marisol Escobar.)

Finally, it’s worth noting – the museum hardly does that – that in a pre-Stonewall era, when non-heterosexual sex could get you beat up, arrested, or murdered, the “new art” world had a dense gay population. . The proof of this is here, in the Coenties Slip crowd, in Johns and Rauschenberg, in Stevenson and of course Warhol. John Cage and Merce Cunningham, in a section of the show devoted to experimental dance, can be counted as well, as can John Ashbery and Frank O’Hara, whose voices sound from recordings of avant-garde poetry.

And then there’s the great Jack Smith and his movie “Flaming Creatures” (1963), in which a bevy of non-binary bodies, some clothed, some not, tumble orgiastically to the music of Top-40 radio hits. It’s pure, crazy poetry. And it caused filmmaker and critic Jonas Mekas to be charged with obscenity when he screened it in March 1964, at a time when the city was frantically trying to clean up its act ahead of a World’s Fair that, among other uplifting entertainment, would take place, Michelangelo’s venerated “Pietà”, imported from the Vatican.

Michelangelo. Jack Smith. Foreign bodies. “Pieta.” Art in New York in the early 1960s made for an intoxicating mix. Culturally, we were sitting on the edge of something and leaning forward. And a quick flick through the show’s catalog, a three-year illustrated timeline edited by Celant and designed by Michael Rock, gives you a sense of a greater — national, global — shaky state.

Here’s a photo of Jacqueline Kennedy leading her televised White House tour, and one of the segregationist George Wallace blocking entry to the University of Alabama. There is Martin Luther King Jr. who talks about civil rights with Lyndon Johnson in the Oval Office; and there’s Buddhist monk Thich Quang Duc who burns himself in Saigon to protest US intervention in South Vietnam. Here’s a studio recording from the ‘Leave It To Beaver’ television family; here’s a blurry clip of two men kissing in a Warhol movie.

Most of these images once appeared in popular magazines. I don’t know what my father thought when he saw them in Time or Life. But his dedication to Mad makes perfect sense.