A ‘sleeper’ discovered at auction tells a very Dutch story 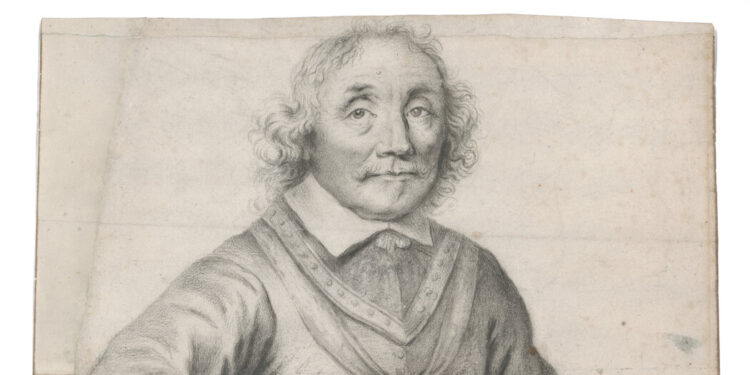 AMSTERDAM — In the art world you would call the drawing a ‘sleeper’. A small Massachusetts auction house put it up for sale as an “unidentified gentleman, initialed IL and dated 1652,” with an estimate of $200 to $300. In about 10 minutes it sold for half a million dollars.

The New York dealer who bought the piece, Christopher Bishop, is now taking it to one of the world’s top art fairs, TEFAF Maastricht, where it will be featured on the shortlist of exhibition highlights, with an asking price of 1.35 million euros (about $ 1.44 million).

How did it go from a little bit of nothing to a big problem? History, you might say.

The story begins at the beginning of the 17th century, when a 9-year-old Dutch boy named Maerten Tromp went to sea with his father, a naval officer. Three years later, English pirates murdered his father, but Maerten joined the Dutch navy in 1637 and rose to command of the Dutch fleet.

He was a determined fighter, and often victorious. After great success during the First Anglo-Dutch War, he sat down for a formal portrait by a Dutch master, Jan Lievens, in Amsterdam. A year later, in 1653, he was killed in battle by an English sniper, buried in a marble monument and celebrated as a Dutch national hero.

The original Lievens drawing was pinned to an engraving plate (upside down) and turned into a print, reproduced dozens of times. Lievens later made a new drawing based on the first, in which Tromp looked a bit shriveled; this second drawing is now in the collection of the British Museum in London.

He also used the original drawing as the basis for two oil paintings by Tromp, one of which is now in the collection of the Rijksmuseum and the other in private hands.

In 1943, this image of Tromp again became a template for a stamp bearing Tromp, a sort of nationalist gesture by the Dutch government in the middle of World War II.

The original drawing was traded among private collectors. It was last inventoried among the possessions of English collector William Mayor, who died in 1874, and last seen in public at an auction of Robert P. Roupell’s Frankfurt estate in 1888. It then disappeared for 132 years. long out of sight.

In 2020, Mr Bishop worked remotely during the coronavirus pandemic, scanning online auction catalogs for finds. An image of a drawing in the small Marion Antique Auction home, on mainland Massachusetts near Cape Cod, caught his eye. Though it was supposedly signed “IL”, Bishop realized that the monogram could be “JL” because “J” was often written “I” in the 17th century.

“I put it in the back of my mind, and then I thought for a few hours,” he said. “It just struck me, why couldn’t it be Jan Lievens? Then I did some research online and saw the print. I thought this might be the original that the graphic artist made the engraving from.”

A few days later, Mr. Bishop found the archive of the mayor’s collection, who told him that the measurements matched Marion’s drawing and that the monogram was written under Tromp’s arm. He booked a viewing and drove to Massachusetts; because he couldn’t get in, the auction house owner brought it out so he could view it on the porch.

“I knew it was a real drawing and I had a very positive feeling,” he said. “I tried very hard not to telegraph to them how optimistic I was about it.”

Frank McNamee, co-owner of Marion Auctions, said it came from a family that wanted to auction quite a bit of hand-painted porcelain. He visited their home and was invited into a room with framed prints. The owner told him, he said in a telephone interview, “Just pick what you think may have value.” mr. McNamee saw the portrait and was intrigued. “I actually thought it was a fake Rembrandt,” he said.

“There wasn’t enough time to really research it, but I made sure it was featured in all auction ads,” added Mr. McNamee to it. He said they estimate it at just a few hundred dollars, “assuming we might not be right.”

By the time of the sale on October 10, 2020, it was clear that the drawing had already aroused a lot of curiosity. More than 15 potential bidders had called about it before the sale, and although there were only half a dozen people in the auction room due to Covid, at least five people placed bids over the phone. Many people had the same idea as Mr. Bishop. They thought it might be the long-lost Lievens.

When the auctioneer, Dave Glynn, reached $200,000, he paused. “Looks like we underestimated this one,” he said before continuing.

After about $300,000, Mr. McNamee said, there were only two bidders left. They pushed the price up to $514,800, where the hammer fell. Even at that point, Mr. Bishop wasn’t quite sure whether the drawing was a Lievens.

“It had plenty of fitness issues,” explained Mr. McNamee. “It was damaged and it was laid down, or glued to a backing, and that causes problems with acid, which burns into the work. From what I remember that was an issue with that, as well as some paper loss to the piece, but not in the image.

mr. Bishop took it back to New York. A restorer removed it from the back and found that the paper on which the drawing was made had a watermark — an identifying pattern that indicated the 17th-century maker. It was a particularly unique paper supplier that both Lievens and Rembrandt had used in Amsterdam in the 1650s – a telltale sign of its authenticity.

When Bishop compared it to one of the prints made from the subsequent engraving, many other elements aligned: the pinholes where the drawing would have been attached to the plate, the particular folds and tracings, and even ink stains left on the paper. .

“I have no doubt that this is Admiral Tromp’s portrait that was in old collections but has disappeared,” said Gregory Rubinstein, head of the Old Masters Drawings department at Sotheby’s in London, who then examined the drawing. “It is a completely authentic and very important example of a portrait drawing by Lievens.”

Mr. Rubinstein had heard about the drawing in the Marion auction; he first saw the work in real life in New York earlier this year. “It was more impressive than I expected,” he said. “It turned out to be everything you hoped it would be.”

Master Drawings magazine published an article in January by Mr. Rubinstein about Lievens’ drawing, calling it “the starting point for a large series of Trompiana” or iconography of “enormous national importance”, and a crucial piece of Dutch national patrimony.

While Mr Rubinstein wouldn’t blame a petty antiques auctioneer for missing out on its significance, he said there probably won’t be much doubt among old masters at TEFAF about its value.