A surprising global dance show, deep in the heart of Texas 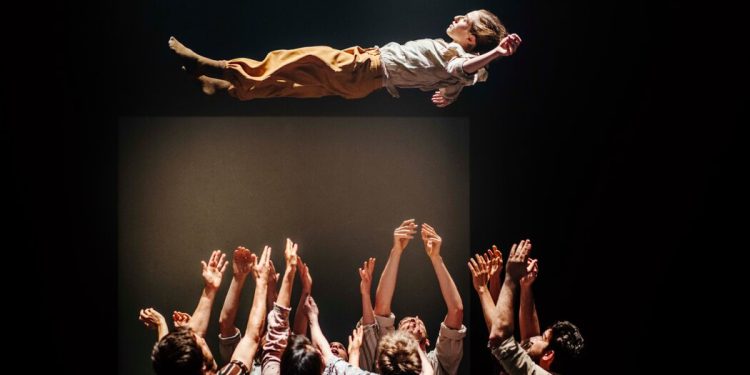 Harold George, a young dancer from Sierra Leone, was studying in Belgium in 1992 when a friendly Texas expat named Nancy Henderek invited him to perform in a showcase at the international school her children attended. She named the concert Dance Salad for its bite-sized selection of styles and performers, including some of the city’s top professional companies.

“It was her little side effect,” George recalls in an interview from Brussels, where he is now the director and choreographer of Dunia Dance Theater. Two more Belgian Dance Salads followed, and that’s where it could have ended, a fond memory of an overseas adventure. However, Henderek returned to the United States, not with a new language or an expanded gastronomic palate, but with a dance festival.

“Born in Brussels, raised in Houston”, is how Henderek, 76, likes to describe the festival. She decided to replant it in Texas, she said in a Zoom interview, because “the international dance had to be represented here too.”

The festival, which became Henderek’s full-time focus, is now central to the city’s cultural agenda. On April 14-16, Dance Salad will celebrate the 25th anniversary of its American incarnation – not counting two years lost to Covid – with a lineup of top international artists (all originally intended for the 2020 festival), including the Royal Ballet of Flanders. from Belgium, the Hofesh Shechter Company from England and Dunia Dance Theatre, but also companies from Denmark, Germany and France.

How did these artists come to share a mixed-bill program for three nights in a city not known as a global dance hub?

One answer is Henderek’s distinctive vision. She presents many dances – or parts of them – in one evening (similar to New York’s eclectic annual Fall for Dance programming), rather than, as in a traditional festival model, giving each company an evening or several to itself. “It brings the world together in my own way,” she said.

Each work appears in at least two of the three programs, so spectators who attend multiple shows, which many do, watch some dances twice. “I’m a big believer in seeing a piece twice,” Henderek said. On the first viewing “you get a feel for a piece. And then you want to see it again to see what resonates and what really blooms.”

But what sets the Dance Salad apart even more is Henderek’s hands-on involvement in editing some of those dances to fit the program. This year, three works will be presented in what she calls a “curated version” so that the public “sees work that they won’t see in that specific way anywhere else,” Henderek said. That may not be the goal of other dance presenters, but it has become part of Dance Salad’s own identity.

As soon as she saw Shechter’s full-length “Grand Finale” a few years ago, Henderek started imagining a snippet that would be appropriate for this year’s salad. “I immediately felt it had the resonance of something I could bring,” she said. If she started with the pas de deux in the middle of the first act and continued through the end of that act, she said, “That would be a performance unit that would work for Dance Salad.” She approached Shechter with this idea.

“It took me a while,” he said in an interview about showing a snippet. He had always considered ‘Grand Finale’ to be a standalone piece, but Henderek’s proposal to present it along with other short works ended up sounding ‘like a cool idea’ to him. He also saw that removing some design elements – such as a wall that is priceless to travel with – revealed the human side of the dance. “I like how limitations make you look at work in a different way,” he said. His main concern was “that the heart of the piece be preserved.”

That is also Henderek’s priority. She has been dancing since she was three, also for many years with the Houston Grand Opera; taught dance in Texas and abroad; and even choreographed, including for the first few Dance Salads. Her background shows a deep respect for the craft of making dance. When she asks choreographers to consider revisions, she invites them to rethink a work rather than just crop it.

“It’s not a statue, and you’ll cut the arm off,” she said. “I’m just a little bird saying, ‘How about this way?’ It presents a small challenge.” Well-known choreographers such as Jiri Kylian and Sidi Larbi Cherkaoui have collaborated with Henderek on adapted versions of their works, while others have declined — but “less than you’d guess,” she said.

Ultimately, a ‘curated’ work is still entirely the choreographer’s creation and must have its own artistic integrity. That’s why George agreed to edit his dance “Making Men,” a critical examination of masculinity, for this year’s festival. (A companion film, directed by Antoine Panier, will also be screened.)

“I trust her,” George said of Henderek. “She has a good eye. She has good taste.” Of course there are moments of frustration, he said, noting as an African artist, “There is a cultural distance between us. She may not see the stories I’m trying to tell. But she will have that conversation.”

Henderek is also well aware of her audience. The full “Making Men” includes depictions of sexuality and violence as a way to explore male conditioning. “She said, ‘No, I don’t think that will work in Houston,'” George said. “She does have her sensitivities.” Henderek said her intention was to keep the focus in the right place and that if a choreographer dwells on something provocative, the audience “will miss something else.” But, she added, “I want to expose the public to things that make them reach.”

That balance between comfort and challenge, stylistically and thematically, is one of the reasons why the audience returns. “She has gathered an audience that trusts her,” says Belgian-Colombian choreographer Annabelle Lopez Ochoa, whose work was first shown in the United States at Dance Salad, in 2006. “They buy a ticket without knowing what they’re getting. will see, but ready to discover different aesthetics in dance. They’re in for the ride.”

Together with her curatorial eye, it is Henderek’s organizational willpower that has enabled Dance Salad’s immense logistical feat to endure for a quarter of a century. She remains the festival’s artistic director and sole curator, leading a streamlined operation of part-time and seasonal administrative and production teams. Since most Dance Salad performers are not citizens of the United States, she has also become an expert in visa applications. (“You’ll have them in by Christmas if you want them by April.”) Funding is being raised from local sources, in-kind services and corporate sponsors, including modest contributions from Exxon-Mobil, where her husband worked. ended up in Brussels in the first place.

“She’s an extraordinary impresario and a shrewd operator,” said Nancy Wozny, a Houston art journalist who attended the first Texas Dance Salad and most since.

This effort makes Houston arguably America’s most exciting dance city for one weekend a year. Maggie Foyer, a dance writer in London, said: “I travel a lot, but there is no other date in my calendar where I can see so much fine dance all in one place.” Foyer, who has been a regular at Dance Salad since 2008, will host the festival’s annual Choreographer’s Forum on April 13. In Houston she said, “I see dance that I wouldn’t see in London.”

Wozny sees homegrown qualities in Henderek’s voracious appetites and the festival, which can lead to nearly three-hour marathons. “Everything in Texas has a grandeur, and dance salad has an expanse,” said Wozny, who then reminded her of another Texas spectacle that inspires similar dedication: “It’s our rodeo.”