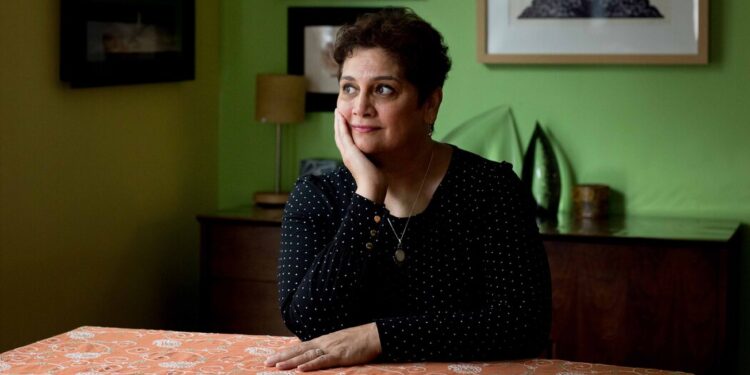 The titles of Anila Quayyum Agha’s two compelling light installations on display this week at Masterpiece London art fair don’t seem to promise an optimistic vision: “This Is Not a Refuge” and “A Beautiful Despair.”

But the works, which all visitors will see at the entrance to the fair as part of the Masterpiece Presents programme, do not come across as dull or depressing.

Instead, both cast dazzling decorative patterns on their colorful surroundings. Mrs. Agha has intricate shapes, partly inspired by Islamic geometric motifs, laser cut into steel cubes. The cubes are then illuminated from the inside, creating a painting with light and shadow.

“People need to become rejuvenated and hopeful,” said Ms Agha, 57. “They both create an environment that is very awe-inspiring.”

Ms. Agha was born and raised in Lahore, Pakistan, but has lived in the United States for over 20 years, traveling from Texas to Indiana and most recently to Georgia, where she teaches at Augusta University.

Her light installations have recently attracted a lot of attention for her.

“At the moment I am experiencing a heyday of exhibitions,” said Ms Agha. She spoke on the phone from Washington, where she was a research fellow at the Smithsonian Institution.

The installation “Let a Million Flowers Bloom” was recently presented at the Columbia Museum of Art in South Carolina, and “All the Flowers Are for Me” is on display at the Peabody Essex Museum in Salem, Massachusetts.

Last fall, a version of “A Beautiful Despair” was shown at the Amon Carter Museum of American Art in Fort Worth; the museum subsequently acquired the piece, along with three works on paper by Mrs. Agha.

“A Beautiful Despair” stems from a personal tragedy.

“During the pandemic, I myself have lost a sister,” Ms Agha said, adding that the general sense of loss in the Covid era also motivated her.

Shirley Reece-Hughes, Amon Carter’s curator who hosted the show in Fort Worth, discovered Ms. Agha’s work in the 2015 “Intersections” exhibition at Rice University in Houston.

“She’s not influenced by trends and directions that the art world is taking,” said Ms. Reece-Hughes. “That’s how she differentiated herself.”

Ms. Agha noted that her practice also went beyond the installations that had been widely seen.

“I think most people who know my work are familiar with the shadow boxes; they’re more visible,” she said. “But the drawings and paintings I make are more intimate.”

“Her work is conceptually driven, but it’s also beautiful,” says Mr. Tagore, who has galleries in New York, London and Singapore. (His booth will also feature work by other artists he represents, including Maya Ando.)

The idea behind “This Is Not a Refuge,” Ms Agha said, was “specific to the condition of the refugees who have been trying to get to safety in recent years both in Europe and on the southern border” of the United States.

“As soon as we approach it, we realize it’s not really a sanctuary,” she said, referring to the piece’s effects. “It looks beautiful from a distance. It’s more of a mirage.”

Perceived dualities and contradictions, including those around gender, often animate her work. “I think my work is very feminist,” she said.

Especially “A Beautiful Despair” revolves around the place of women. It is doubly lit, giving you the feeling of being underwater.

“I really thought about how 50 percent of the world’s population — women or people who identify as female — are often left behind,” Ms Agha said.

That includes the cultural milieu of museums and galleries in the United States.

“The art world has captivated women for so long,” said Ms Agha.

Some of her mixed-media works on paper include embroidery, and that choice of medium, once thought of as women’s work, is important, Ms Reece-Hughes said.

“In Pakistan, women were expected to sew, and her mother was in a sewing circle,” Ms Reece-Hughes said of Ms Agha. “She says sewing is just as valuable as painting or drawing.”

In particular, Mrs. Agha uses two forms – a basting stitch and a blanket stitch – often in combination with collage materials.

“Sometimes I use Mylar to give it a ghostly image,” she said.

Ms. Agha received her undergraduate degree in Lahore and later earned her Masters of Fine Arts from the University of North Texas.

“When I was in graduate school, I was often told that if you start using patterns, you become a craft artist,” Ms Agha said.

She added: ‘I am from the East; pattern is part of my life. I decided to change the idea that only women are associated with patterns.”

Ms. Agha cited the influence of Mughal architecture in general, and specifically Lahore’s Tomb of Jahangir, built for a Mughal emperor, due to the use of the perforated wall pattern known as a jali. She visited the grave as a teenager.

“Jalis are carved from marble slabs about two feet deep, and the perforations allowed air to circulate in these huge buildings,” she said.

A later trip to the Alhambra Palace in Granada, Spain — famed for its soaring Islamic architecture — also impressed, she said, partly due to the reactions of her fellow visitors.

“Everyone talked to everyone,” she said. “It was a moment of joy that people wanted to share.”

“When I go for a walk, I look at my shadows, and I’ve been doing that for 30 years,” she said. “I love the speckled sunlight falling through the leaves of the trees, and I’m fascinated by the movement as you walk.”

That can be a starting point, consciously or unconsciously, for viewers to appreciate Ms Agha’s work.

“I’m not the kind of artist who wants to punch you in the face,” she said. “I want to do my work in a softer and more harmonious way.