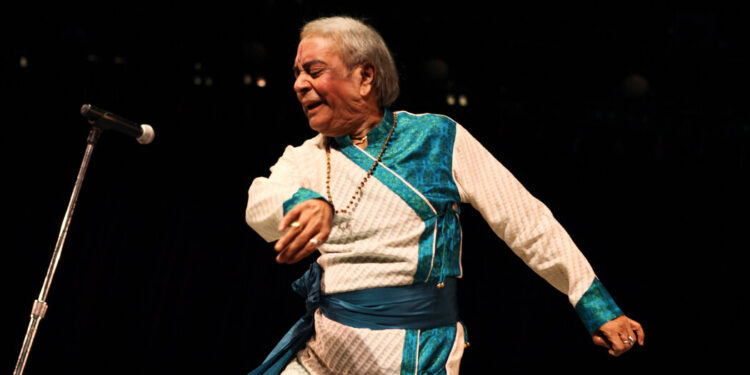 Birju Maharaj, who was revered in India as an exponent of one of the oldest and most established classical dance forms, and who choreographed Bollywood hits and Indian film classics by directors such as Satyajit Ray, died on January 16 in New Delhi. He was 83.

The cause turned out to be cardiac arrest while he was on dialysis, a granddaughter, Ragini Maharaj, told the Press Trust of India news agency.

Mr Maharaj performed in the Kathak tradition, which according to some evidence is more than 2000 years old. Kathak dance was performed in royal courts across the country and found favor with both Hindu and Muslim cultures. It is one of eight classical dance genres in India, each largely regionally based and each with its own sophisticated and diverse vocabulary.

Kathak’s lineages were associated with three cities in the central Indian states of Uttar Pradesh (Lucknow and Banares) and Rajasthan (Jaipur). Mr Maharaj grew up in a tradition of Lucknow, a form that has become widely popular.

Kathak is the tradition most closely associated with live music. The dancers tell a story using steps and facial expressions, often inspired by ancient Indian epics. But it is also an art of virtuoso, exuberant rhythmic footwork, often with tight rhythmic patterns that suddenly come to a sensational end to the beat.

Mr Maharaj’s eyes, mouth, arm gestures and footwork were all part of the brilliant and charming skill with which he made Kathak famous. Like several other Indian genres, Kathak uses anklets with dozens of tiny bells that jingle with the steps of bare feet; the meters that sounded through lord Maharaj’s anklets were often astonishing.

Brij Mohan Nath Mishra was born on February 4, 1938 in the seventh generation of a prominent Kathak family known as Maharaj for their mastery of the arts.

He received his early dance training from his father, Jagannath Maharaj (popularly known as Acchan Maharaj), who had been the court dancer in the princely state of Rajgarh and who became his son’s guru and co-artist. The British were still ruling India when Birju, aged 7, made his first public appearance.

Two years later, his father died and two of Birju’s uncles – Shambhu Maharaj and Lachhu Maharaj – continued his dance training. When India gained independence in 1947, Kathak took on new glory, with Birju as its leading exponent.

He moved to New Delhi as a boy. At the age of 13, he started teaching Kathak at the Sangeet Bharati, a major performing arts school. In his twenties, he was known nationally as one of the great dancers of his country. He also practiced and performed Hindustani vocal music, composed new music, played multiple musical instruments, wrote poetry and painted.

He taught dance schools in New Delhi with his uncle Shambhu and opened his own school, Kalashram, in 1998.

Mr Maharaj married Annapuran Devi in ​​1956. They had three daughters, Kavita, Anita and Mamta, and two sons, Jaikishan and Deepak. Both his sons and daughter Mamta are leading figures in the Kathak practice. Maharaj’s wife died in 2008. A complete list of survivors was not available.

Early in his career, he participated in the cultural groups sent abroad by the Indian government. When full mythological and historical dance dramas became standard in the 1970s, he choreographed some, some with Mughal themes. In the eighties he focused on abstract, fully rhythmic compositions. Both humor and sensitivity became part of his stories, along with mathematics and numerology.

He choreographed a number of dances for Indian films, starting with Satyajit Ray’s classic “The Chess Players (Shatranj Ke Khiladi)” (1977). He also made some famous dance numbers in Bollywood hit movies like “Devdas” (2002) and “Dedh Ishqiya” (2014).

Mr Maharaj gave Kathak dance lessons to movie star Deepika Padukone for the movie “Bajirao Mastani” (2015). He won a Filmfare Award, a major award from the Indian film industry, for the best choreography for the song “Mohe Rang Do Laal” in that film.

Widely known as Pandit Birju Maharaj – Pandit refers to skill, scholarship and authority – he danced in Europe and the United States, visiting Washington in 2014 and New York in 2019.

At least well into his late 70s, Mr. Maharaj see how Kathak was able to display a brilliant, jazz-like interplay with his musical accompaniment, while remaining an art of both communication and playfulness. He was devoted to his musicians and always traveled with them. They often teased him during the performance with strands of rhythmic complexity that he would gleefully rise to.

He also showed that dance is part of something bigger: a response to nature and to the divine.