Carmen Herrera, Cuban-born artist who rose to fame at age 89, dies at age 106 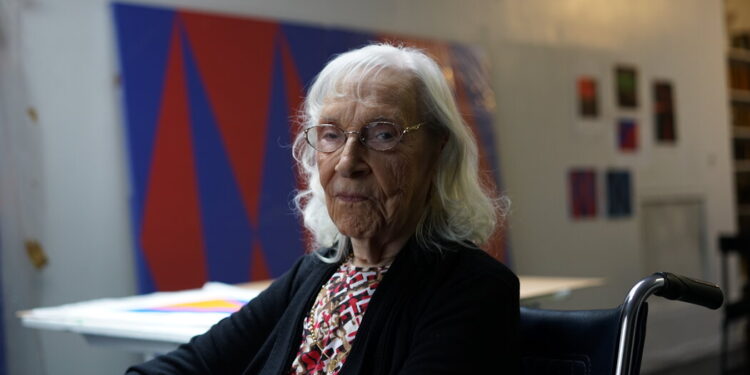 Carmen Herrera, a Cuban-born artist who painted abstract geometric shapes in Paris and New York, almost unnoticed for most of her long life, then shot to international fame after her canvases began selling when she was 89, died Saturday at the age of 89. loft in lower Manhattan that has been her home for 60 years. She was 106.

Antonio Bechara, an artist and friend and her legal representative, confirmed her death.

In an art world that adores the new and the young, Mrs. Herrera went into old age ignored by the commercial markets, enjoying only the lonely pleasures of all struggling artists: creating wonders for their own good.

The passing years turned into decades, then half a century. Patiently, her brushes yielded minimalist geometric configurations, such as visual haikus, in stark black-and-white and later radiant colors: triangles and trapezoids, domed shells, rondos and diamonds floating in a pristine white-canvas universe.

In post-war Paris, Mrs. Herrera exhibited at the Salon des Réalites Nouvelles, the venue for abstract artists. In New York, she found space in shopping arcades, sidewalks, everywhere she could look. Years later, her work was exhibited at the Alternative Museum in the East Village and El Museo del Barrio in East Harlem. There were small but rave reviews, but no buyers.

Still, Mrs. Herrera persevered. She lived frugally in her attic, tucked her treasure trove of rolled-up canvases into closets, and continued painting, supported by her husband, Jesse Lowenthal, an English teacher at Manhattan’s Stuyvesant High School for 45 years until his death in 2000.

In 2004, Mr. Bechara started her work with Frederico Sève, the Brazilian-born owner of the Latin Collector Gallery on Hudson Street in TriBeCa, a longtime advocate for Latin American artists, who hosted a show for three Latinas.

In a short review for DailyExpertNews, Holland Cotter wrote: “This sharp, handsome show picks up a thread of geometric abstraction in 20th-century Latin American art and follows it in the work of three women who made significant contributions to the history of that art.

“The senior artist,” he continued, “who is also the least well-known is Carmen Herrera, who was born in Cuba in 1915 and has lived in New York City since 1954. Her declarative, witty, astute style has points of contact with Mondrian , Ellsworth Kelly and Op Art, but is most directly associated with the vanguard neo-concrete work of artists such as Lygia Clark and Hélio Oiticica who flourished in Brazil after World War II.”

Reactions to the show were quick. Ella Fontanals-Cisneros, a Cuban-born collector who had an art foundation in Miami, bought five paintings from Mr. Herrera. Estrellita Brodsky, another prominent collector, bought five more. Agnes Gund, the philanthropist and president emerita of the Museum of Modern Art in New York, also purchased several and, along with Mr. Bechara, donated one of Ms. Herrera’s black-and-white paintings to MoMA.

Awards in art publications and the general press followed solo exhibitions in New York and London. A touring retrospective of Herrera was a hit across Europe. Her work has been acquired for the permanent collections of MoMA, the Hirshhorn Museum in Washington, the Tate Modern in London and the Walker Art Center in Minneapolis. Private collectors also picked up her work. Journalists pushed for interviews.

The value of her paintings skyrocketed. They went for $50,000 each in 2009, and up to $160,000 in 2014 — amounts unimaginable when Ms. Herrera was in her eighties. The Observer of London called her work the discovery of the decade, asking, “How could we have missed these brilliant compositions?”

Much of her newfound money went to 24-hour assistants, allowing her to keep the studio loft she had occupied for nearly five decades. “The money is useful because at the end of your life, to my surprise, you need a lot of help,” she told The Telegraph of London. “Otherwise I would end up in a nursing home. And that’s what I’m afraid of.”

At 94, Mrs. Herrera, skinny Giacometti, with steel-rimmed, shoulder-length glasses, stark white hair, housebound, a regal woman in a wheelchair, afflicted with arthritis but still painting. How had she survived after decades of being unknown?

“I do it because I have to do it; it’s a compulsion that also gives me pleasure,” she told The Times in 2009. “I’ve never had any idea of ​​money in my life, and I thought fame was a very vulgar thing. So I worked and waited. And at the end of my life I get a lot of recognition, to my surprise and pleasure actually.”

Turning 100 in 2015, her status in the modern art canon was cemented by the release of a half-hour documentary, “The 100 Years Show,” by Alison Klayman, and by recording Mrs. Herrera’s diptych, ” Blanco y Verde” (1959), featuring works by Ellsworth Kelly, Frank Stella, Agnes Martin and Jasper Johns as the Whitney Museum of American Art opened its new home in Manhattan’s Meatpacking District.

“It’s about time,” Mrs. Herrera told a reporter about a whiskey at her loft, on East 19th Street, near Union Square. “There is a saying that you wait for the bus and it will come. I have waited almost a hundred years.”

In 2016, Mrs. Herrera showered with accolades when the Whitney opened “Lines of Sight,” an exhibition of 50 of her paintings focusing on the period 1948 to 1978, the years during which she developed her signature geometric abstractions, including a canvas of backgammon-like elongated triangles, titled “A City” (1948).

“At 101, artist Carmen Herrera is finally getting the show the art world should have given her 40 or 50 years ago: a solo exhibition in a major museum in New York,” wrote Karen Rosenberg in The Times. “The show presents her as an artist of formidable discipline, consistency and clarity of purpose, and a major player in any history of post-war art.”

Carmen Herrera was born on May 31, 1915 in Havana to Antonio Xavier Herrera and Carmen Nieto. Her father was the founding editor of El Mundo, a newspaper in Havana, and her mother was a reporter there. Carmen grew up in a prosperous and cultured household, surrounded by art, music and literature. Visitors included Langston Hughes, the poet and leader of the Harlem Renaissance.

She learned French and English and studied art in Havana, then attended Marymount International School in Paris for high school. She later studied architecture at the University of Havana, but dropped out amid the unrest surrounding the rise of military dictator Fulgencio Batista. She married Mr. Lowenthal in 1939, who was visiting Cuba from New York. They never had children; Mrs. Herrera’s survivors include a niece and nephew, Mr. Bechara said.

After getting married and moving to New York, Mrs. Herrera studied at the Art Students League for several years. She and her husband then lived in Paris from 1948 to 1953, where she developed a style of bold colors and sharply defined geometric shapes. Her work has been exhibited with that of Josef Albers, Jean Arp and other post-war abstract artists.

But by the time she returned to New York in 1954, her view of abstract geometric forms had taken an ill-fated turn, becoming simpler in concept, often in black and white, leaning towards a minimalist style, as opposed to the larger-than-life works. from friends such as the abstract expressionists Barnett Newman, Mark Rothko and Willem de Kooning, whose broad gestures on canvas became increasingly popular.

“The prejudices some gallery owners held against women and Latin American artists put her at a disadvantage, as did the fact that her work—some of which foreshadowed later op art trends and hard minimalism—was inconsistent with the fashion of that period for abstract expressionism,” wrote John M. Cunningham in a profile of Mrs. Herrera for the Encyclopaedia Britannica.

Mrs. Herrera followed her vision, however, and while her paintings went unsold, critics took notice of what she was doing.

In 1966 Hilton Kramer told Times readers: “Within the confines of the geometric and hard edges, a painter’s success often depends on an accurate assessment of what personal innovations are possible within the impersonal conventions of these styles. Miss Herrera shows an understanding of this problem and is thus able to confer something distinctly her own.”

Four decades later, in 2005, Times critic Grace Glueck refined the point. “The abstractionist Carmen Herrera creates minimal yet eloquent paintings whose power comes from their intense fusion of color and ascetic form,” she wrote. “Over a long career, Mrs. Herrera has delivered a rare feat: she has managed to imbue her ascetic, normally impersonal way of art with emotion and spirit.”

That career was recognized last July by the French government, who appointed her Officier de L’Ordre des Arts et des Lettres. And just days before her death, Ms. Herrera learned that the National Gallery of Art in Washington had acquired two of her works, Mr. Bechara said.

“She was so excited,” he said.