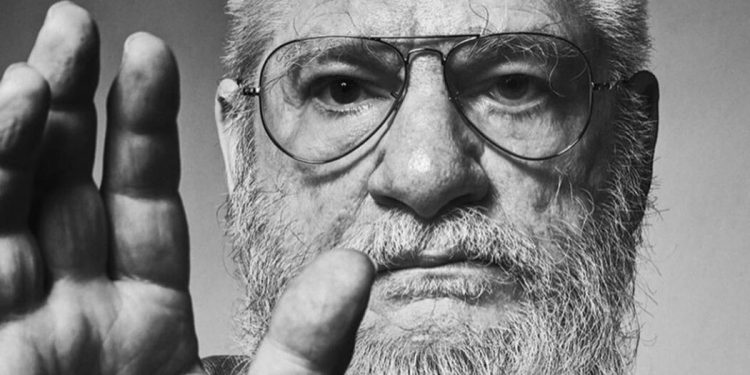 Dan Graham, a contrarian scholar best known as a conceptual artist despite his protests, died on February 19 in Manhattan. He was 79.

His wife, Mieko Meguro Graham, confirmed the death but declined to provide a cause.

While he had his problems with conceptual art as a category, Mr. Graham’s resistance to labeling ran deeper. In a prolific career spanning genres as diverse as sculpture, architecture and ‘pop rock opera’, with pioneering video and performance art, as well as criticism and teaching, he often identified himself not as an artist, but as a writer. Sometimes he added that his real passion was at least rock music.

But contradiction was also a philosophical line of his otherwise disparate ventures.

Whether he claimed in an early piece of criticism that Dean Martin’s variety show was more self-conscious than it appeared; or help Sonic Youth’s Kim Gordon go from an art student to a musician by featuring her in a performance piece called “All-Girl Band: Identification Projection”; or standing between a mirrored wall and a seated audience, lecturing them on what they were looking at, Mr. Graham always tried to unsettle.

His best-known work was a decades-long series of large-scale architectural installations he termed “pavilions” – sinuous booths of semi-reflective glass that wrapped his preoccupations with spectacle in an attractive sculptural language derived from minimalism.

If you enter a pavilion, or simply observe it, you may have found yourself reflected against the room beyond, undermining the sense of where, or even who, you were. Or else, if you think of yourself as a funhouse mirror distortion, you might have started to wonder how much of your reality was defined by your architectural environment. Either way, you would definitely start to think differently.

Mr. Graham’s entry into the art world was almost accidental. A voracious reader and snapshot photographer, but an uncaring student, he moved to New York after graduating from high school and founded the John Daniels Gallery on Manhattan’s Upper East Side in 1964 with two friends.

“I was what they call a slacker,” he recalled in an article in the artist Michael Smith’s Interview magazine in 2017. “I didn’t have a job and I had two friends who wanted to climb socially because they were reading Esquire magazine, and a gallery looked like a cool place to climb socially.”

The gallery lasted less than a year with no sales. But before closing, it had featured Dan Flavin and Donald Judd, given Sol LeWitt his first solo show, and introduced Mr. Graham — who had hitherto been more interested in science fiction and philosophy — into the heart of New York art. scene.

When he started making art himself, he eschewed conventional media and sent text pieces and photo spreads to magazines. This, he would suggest, was one way of disputing the notion of artistic value – to be art would be disposable. Subsequent touchstones included “Lax/Relax,” a spoken word performance inspired by Reichian therapy, and “Rock My Religion,” a riveting, gritty video documentary linking 18th-century Shaker circle dancing with hardcore punk while performing hippie psychoanalysis. . movement.

“He is very involved in astrology,” wrote Mr. Smith in the interview article, nod to the difficulty of summarizing an exercise and a personality defined by its frenetic flow of mental associations. “He’s an Aries, which indicates spontaneity. He also likes clichés, architecture, music, art, puppets, mixtapes and TV comedy.”

In the end, Mr. Graham found huge success for a self-proclaimed slacker. He had a retrospective at the Whitney Museum of American Art in 2009 and his “Rooftop Urban Park Project,” a multi-part pavilion shaded by wooden water tanks, stood atop the Dia Foundation building in lower Manhattan in the 1990s.

Installed on the roof of the Metropolitan Museum of Art in 2014, the “Hedge Two-Way Mirror Walkabout” immediately became the focus of an untold number of selfies, and its “Child’s Play” structure was exhibited in the sculpture garden of the Museum of Modern Art in 2017.

However, success was no reason to stop tweaking his audience. At a party for the MoMA installation, according to a former assistant, Mr. Graham picked up a microphone and began talking about what he called his “favorite museum”: the Walker Art Center in Minneapolis.

He was born Daniel Harry Ginsberg on March 31, 1942 in Urbana, Illinois, where his father, Emanuel Ginsberg, a Ph.D. in organic chemistry from the University of Illinois. His mother, Bess (Freedman) Ginsberg, was an educator who ran kindergartens.

In 1944, after applying to more than 100 jobs without getting an interview, Emanuel Ginsberg changed his name to David E. Graham and was hired by General Aniline and Film. His wife and children also became Grahams.

From his teenage years, Dan was plagued by mental problems that were diagnosed and treated in various ways, such as schizophrenia, depression or manic depression. Whatever it was, according to his younger brother, Andrew, it went on at least into his sixties, making life difficult for Mr. Graham and those who loved him.

“He was a difficult person to have in your life,” said Ann Riesenberg, his sister-in-law. “But what I’m left with is this gratitude to have had someone who encouraged me to be everything I was, whatever that was.”

In addition to his wife and brother, Mr. Graham has a son, Max Ward-Graham. His sister, Deborah Graham Durant, died in 2015.

Mr. Graham was a much-loved figure in the art world, known not only as a sharp critic with a provocative sense of humor, but also as a radically generous friend.

“I’d say he had some kind of instinct for when things were going really bad in people’s lives,” said the artist Antoine Catala, who worked for Mr. Graham for a few years in the early 2000s, “and he would show up for them.”