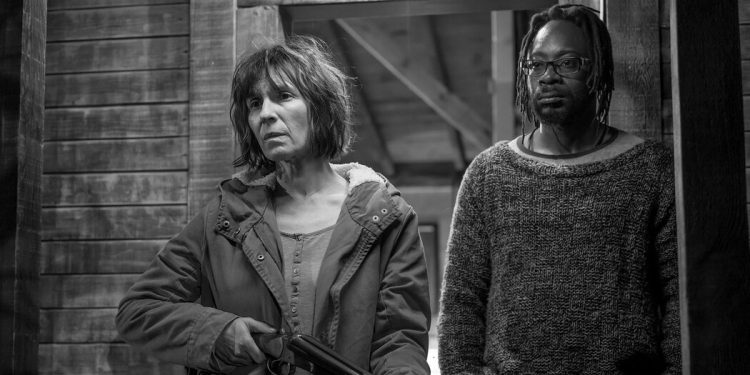 At the beginning of ‘Fear’, the dominant feeling is loneliness. In a coastal town in Bulgaria, shot in gloomy, expressive black and white, a middle-aged woman named Svetla (Svetlana Yancheva) leads a life that seems to shrink before our eyes. The school where she had taught is closing, leaving her unemployed. A widow, she visits her husband’s grave, buys some eggs on credit from a small grocery store, and engages in riotous banter with a group of soldiers.

The soldiers work for the border patrol and in due course are warned of the arrival of a group of migrants from Afghanistan. Dealing with refugees is a bleak routine – displaced persons often pass here hoping to reach Germany – although a television journalist tries to sensationalize the situation. She asks the commander of the unit (the wonderfully gruff Stoyan Bochev) leading questions about terrorists and drug smugglers and tells her viewers that the mood is “tense” at the border. Not really. The Afghans are tired and anxious. The locals seem to be plagued with a mixture of grumpiness and resignation, torn between xenophobia and compassion.

Svetla experiences her own version of that struggle when she meets Bamba (Michael Flemming), a refugee from Mali. Their first encounter, while hunting rabbits in the woods not far from her home, has something surreal, almost cartoonish. She swings her shotgun like a Balkan Elmer Fudd. Bamba carefully sets down his suitcase and greets her in English, a language she doesn’t speak. Stunned, she takes him home, putting him first in a storage shed and then in her house.

It is their friendship, scrambling for romance, that awakens Svetla’s neighbors and triggers the fear of the film’s title. The director, Ivaylo Hristov, is adept at slow suspense and comic deception. At first, the casual racism that punctuates discussions about Svetla’s host family seems to be a matter of ignorance – ugly but not entirely hateful. Hristov shows how words lead to actions, how jealousy and boredom mix with prejudice to create a poisonous concoction. Someone throws a rock through Svetla’s window. Obscene graffiti appears in front of her house. A cluster of townspeople who may have been written off as country bumpkins, drunks and clowns coalesce into something like a lynch mob.

It is scary. Not that Svetla is easily scared. Yancheva exudes a strong Frances McDormand vibe – sarcastic, weary and impatient, her brusque demeanor disguise a wafer-thin decency. She is the charismatic moral center of the film, much as McDormand was in “Three Billboards Outside Ebbing, Missouri.”

“Fear” has a clearer, more detailed sense of place than that misguided movie. The faces feel as inhabited as the landscape of stubble fields and boxy farms and sprawling buildings that seem unfinished or half-demolished. The biting, fatalistic humor has as strong and distinctive a local flavor as the hot peppers and mushrooms that Svetla prepares for Bamba.

He is the catalyst for the actions and reactions of the film, but at the same time “Fear” isn’t quite sure what to think of him. Flemming has a wry, melancholy demeanor and Bamba has a tragic backstory, but he also acts more as a symbol than a fully formed character. His role is to awaken Svetla’s latent tenderness, expose the bigotry of those around her and help Hristov deliver a timely humanist message. But he remains a stranger in a story whose moral is that he shouldn’t be.

Fear
Not judged. In English and Bulgarian, with subtitles. Running time: 1 hour 40 minutes. In virtual cinemas and for rent or sale on Amazon, Apple TV and other streaming platforms and pay TV operators.