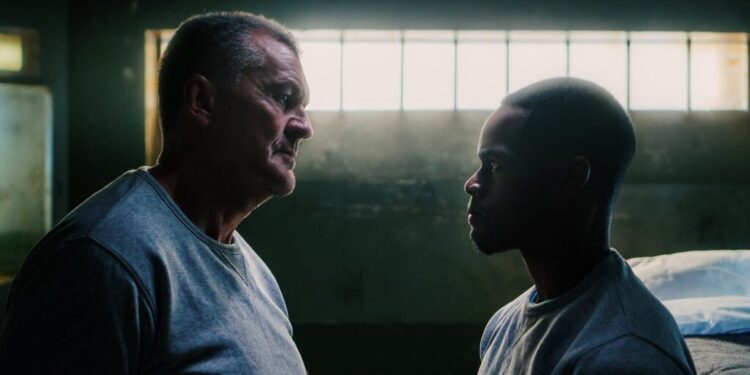 Stream it on Tubi.

An upside-down, slightly out-of-focus image of a man cruelly sticking a lying body to the floor opens Irish writer-director Ross McCall’s gory crime film. Though it takes a while before we learn the victim’s name, the ruthless culprit, an inmate named Steve (Craig Fairbrass), is our unlikely protagonist. To the other inmates, Steve’s cruelty is notorious. They never feel real to him, as he often blacks out during his heinous acts.

After Steve serves 20 years in prison, his daughter (Rosie Sheehy) wants to visit him for reasons he can’t fathom. At the same time, a new prisoner, Marcus (Stephen Odubola), is placed in his cell. Is Steve able to change? McCall’s script not only answers that question, through Steve’s meditative monologues, it attempts to question the prison’s shortcomings as a rehabilitation space. In between these plaintive musings, outbursts of brutality occur: a man’s nose is nearly sawn off and a horde of inmates smash a potential informant to a pulp. Those rifts never cease to adjudicate an inadequate system in a movie with more than carnage in its head.

In the complex plot, Max Tanner (Jasper Paakkonen) is a spy who springs into action when a group of terrorists take the Finnish president and government leaders hostage by invading the presidential palace. Among those trapped inside is Tanner’s co-worker and over and over again lover, Sylvia Madsen (Nanna Blondell). Can Max save her?

While the photo, an adaptation of Ilkka Remes’ novel “Omerta 6/12”, uses some serious dramatic tension to answer that question, it also examines the two-sided moralism of the government through the eyes of one of the mercenaries, Vasa. Jankovic (Sverrir Gudnason), a man driven to unthinkable actions to save his father and save himself from bankruptcy.

Cinematographers Mika Orasmaa and Rauno Ronkainen rely on the camera’s momentum for sweeping trails during the film’s two explosive infiltration scenes (the first takes place in the palace. The second, at the end, takes place in a snow-covered fortress similar to John’s. Moore’s “Behind Enemy Lines”) for a politically fascinating, intricately filmed, thrilling ride.

Initially, this film by French director Cédric Jimenez inspires comparisons to Ladj Ly’s “Les Misérables” when a trio of distrusted police officers are assigned to a drug- and gang-controlled ghetto in Marseille. As in Ly’s film, the police often get into open skirmishes with the local criminals. An impressive backdrop is set in a high-rise building, in which an entire neighborhood of people in masks chases the officers. It moves with the kind of chaotic energy that lets you know the ethically shaky ground the authorities are on.

That terrain shifts even faster when Greg (Gilles Lellouche), Antoine (François Civil) and Yass (Karim Leklou) – the detectives of the specialized anti-crime brigade – steal narcotics from suspects as a bargaining chip for their informant (Kenza Fortas). When the police are arrested, this film, based on a true story, moves from action to personal melodrama. Their ordeal is used by Jimenez to criticize the corruption within the police force and the uneasy power dynamics against marginalized people. The final gloomy scenes make you realize how broken the system is.

‘Green Spirit and the Masters of the Stone’

There’s something endearing about a movie that consciously embraces B-movie schlock, especially when it comes from the heart. The action film from director Michael D. Olmos turns supernatural myths into a story about the origins of a superhero.

At night, Charlie (Charlie Clark), a daytime car dealer, takes part in underground Lucha Libre battles as a character known as the “Green Ghost” (a gringo pun). He accidentally becomes a party to a never-ending battle between ancient Mayan gods and demons for control of a magical green stone that promises unimaginable power. Charlie turns to his family for help, who in turn sends him to train with alien masters (one is played by Danny Trejo).

Olmos infuses this fun concept with demanding MMA fight choreography, sharp editing and chunky effects to compose captivating fights where characters shoot glowing fireballs from their hands. The themes of the film, family and finding your place, become all the more apparent as the dedication of everyone involved is fully felt in the can-do tone of this low-budget adventure.

Stream it on Amazon.

Usually, the biopic form doesn’t lend itself well to action flair. But an exception occurs when the subject is an underdog sports figure who must fight his way to the top to be victorious. Director Daniel Graham’s ‘Prizefighter: The Life of Jem Belcher’, about an 18th-century boxer who is crowned champion of England barefoot, is one such film.

Matt Hookings stars as the titular salt-of-the-earth man, with an innate ability to fight and a desire to avoid the same trap of alcoholism his boxing grandfather Jack Slack (Russell Crowe) has fallen into. The first half of this biopic is playfully carried by a clever, knowing performance of Crowe; while the second half is pure blood sport as Belcher’s attacks are intertwined with his fall from grace. The fights are filmed with a diffuse lens, as if the audience had been hit in the eye. Graham’s firm movement control, providing an immersive experience, will delight any boxing purist.