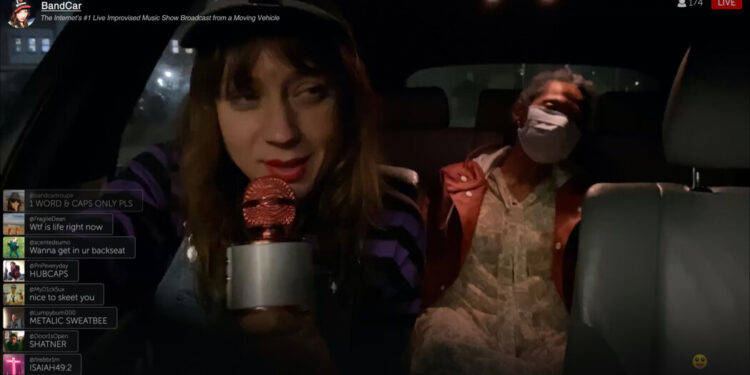 Since last month’s picks took a deep dive into depravity, this time around (mostly) I’ll stick to low-gore, less scary horror movies that won’t keep you up at night.

I’ll start with the most unhinged, low-budget, and controversial film on my list. It’s directed by Rob Savage, whose terrifying “Host,” about a frenzied supernatural Zoom call, was one of my favorite movies released in the first year of the pandemic. (Don’t confuse this “Dashcam” with another recent and great movie of the same name.)

Here, the musician Annie Hardy stars as Annie, a MAGA, antivaxxer host of a livestream show. She travels from Los Angeles to London to visit her ex-bandmate and ends up live streaming a maelstrom of carnage and demonic possession. Shot in an explosive found footage style, the film builds up slowly to the first moment of violence, then never slows down. It’s a raw counterpoint to the silence that made “Host” so effectively disruptive.

Your tolerance for Annie, the character – an annoying American troll – depends on your tolerance for Hardy himself; I enjoyed her jokes and hated her character’s selfish politics. The film has divided horror fans over whether Hardy shares her character’s conservative opinion, and whether it should matter. For a vulgar bonus, don’t miss Hardy’s rap during the credits.

Niki (Sepideh Moafi) and her husband, David (Clayne Crawford), have decided to take a break from their rocky but still loving marriage. Their four children live with her and he has moved in with his ailing father, not far away in their small rural town.

When Niki starts seeing another man (Chris Coy), David fears that his relationship with Niki and their children is in jeopardy, and he’s not wrong. Those loud, disorienting sounds we hear — banging, screeching, eyelashes — are more than signs that David’s emotional state is crumbling. They are warning signs of the coming darkness.

I hope writer-director-editor Robert Machoian doesn’t mind if I put his low-budget, slow-burn indie on this list, since it’s not horror in the traditional sense.

But I don’t know what else to call it as the film begins with a heart-pounding scene of a man pointing a gun at sleeping people, ends with the same man bloodied in a brutal assault, and further filled with scenes of heartbreaking tension. That’s an abomination to me, just above a low fire that never goes out. Crawford is devastating as a doting father slowly creeps to his breaking point.

What happens when a trauma shows up at your front door with a pretty face? That’s the question that drives this riveting Canadian indie from writer, director and actor Mark O’Brien.

The film opens as Frederic (Henry Czerny) and Ethel (Mimi Kuzyk) mourn the death of their young adopted daughter. One night, Frederic, a former priest, hears a noise outside their home, and there he finds an injured young man named Aaron (O’Brien), who says he is lost.

But it turns out that Aaron’s destiny has always been their home, and he’s on an unearthly spiritual mission with Frederic in his sights. “Be careful what you wish for,” one character Frederic warns. “But be sure of what you’re praying for.”

O’Brien has created an intensely intimate supernatural film that feels like it was staged. (He has said he was influenced by Bergman and Haneke.) Long scenes of table conversations can test action-hungry viewers.

But the conversations about faith, punishment and guilt make it clear why the film won best screenplay at last year’s Fantasia Film Festival. Scott McClellan’s black-and-white cinematography is a striking visual companion that makes rural Newfoundland and Labrador look beautiful and sinister.

Watching this ridiculous movie was an unexpected guilty pleasure. In fact, it’s free and best served on a Friday night with pizza and Lime-A-Ritas.

Lily’s anger at the move subsides when she meets Derek (Ehren Kassam), a curly-haired boy who loves John Irving novels but is even more into Zenith, a book he and his friend Violet (Kayleigh Shikanai ) say it will change Lily’s life. to live. But when mysterious accidents happen, Lily and her mother begin to wonder if “Zenith” is a self-help book or a demonic manual.

I have to thank director William Corcoran and writer Adam Rockoff for giving me the high school sex cult book club movie I wish I had when I was 16. It’s the first horror film I’ve seen that features both a feminist defense of Kate Chopin’s “The Awakening” and a discussion of Baudrillard’s nihilism.

Two teenage sisters, Juana (Malena Filmus) and Mara (Lola Abraldes), live in a rural mansion with their emotionally unstable aunt, Inés (Umbra Colombo), who keeps bees for her struggling honey business (and who also has an affair with a local. )

When the girls’ cousin Lucio (Franco Rizzaro) comes to stay, things take an unexpected turn. After all, it’s summer and Lucio is handsome and flirty. He likes rapping, smoking and, at Juana’s request, dropping his towel after showering. But when their friendship turns into a jealousy-fueled romantic triangle pitted against sister and sister, the results turn deadly.

Lucas Nazareno Turturro’s Spanish-language film is best for horror fans who enjoy soap-like drama and don’t mind waiting until the last part for something creepy to happen. Still, the story calls for more sinister outlines and a darker visual vocabulary as it explores anger, resentment, and female sexuality — as directors Josephine Decker and Lucrecia Martel have done as they explored life’s darker corners.