How Buster Keaton turned slapstick – and movies – into art 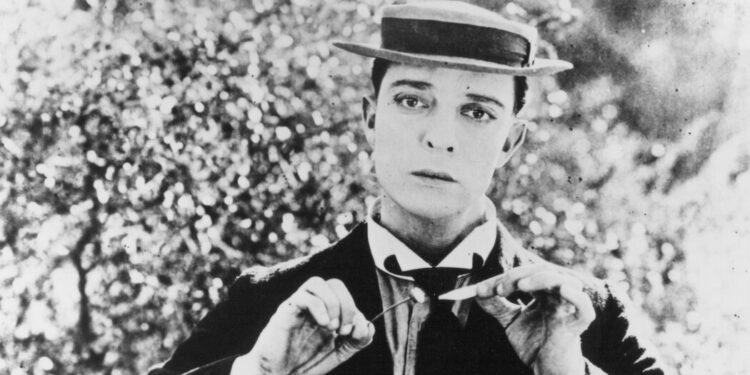 Keaton was as much a technical innovator as a cartoonist, and Curtis’s book goes into great detail about how these effects were achieved. (The spinning house was built on a turntable whose operating belt was buried in dirt and grass.) Just as importantly, “Buster Keaton” serves as a welcome correction for the perception that Keaton was a tragic life undone by booze and the arrival of the talkies. This myth is partly a function of Keaton’s persuasiveness as an actor in his later years: staring grimly into his losing hand as one of the washed-up Old Hollywood “waxworks” playing cards with Norma Desmond in Billy Wilder’s “Sunset Boulevard” (1950) and dancing impassively with bikini-clad star Bobbi Shaw in the teen movie “Beach Blanket Bingo” (1965, a year before his death).

Curtis doesn’t shy away from Keaton’s low point in the 1930s, when he lost his creative autonomy at MGM, wriggled out of a loveless marriage to his first wife, Natalie Talmadge, and drank so heavily that he was out of work for a while. But the overall picture he paints is of a well-balanced showbiz lifer who was just happy to keep working. Unlike many of his contemporaries, Keaton never looked down on television, and early on began to warm to his potential to reach millions. He hosted a variety program on a local Los Angeles station and starred in clever advertising for Alka-Seltzer; Curtis notes that Keaton saw TV commercials “like little comedic shorts that resemble the two-reelers” he made in his youth. Stopping at a party hosted by Mary Pickford on an Easter Sunday in the 1960s, he felt sorry for the silent movie stars in attendance. “I found we had nothing to talk about,” Keaton said. “Some of them had never heard a Beatles record. They hadn’t moved with the times.”

Keaton’s final act was a happy round of victory in which he lived modestly in the San Fernando Valley town of Woodland Hills, happily married to his third wife, Eleanor Norris, and aware of the newfound appreciation his silent films were receiving. The lack of operatic highs and lows in Keaton’s life may make Curtis’ straightforward, sequentially told bio a slog if you’re not a devoted Buster Boi, but it’s as definitive an account of the sad comedian as you could hope.

Dana Stevens’ “Camera Man: Buster Keaton, the Dawn of Cinema, and the Invention of the Twentieth Century” is a welcome addition, in that Stevens, a film critic for Slate, contextualizes Keaton’s performance in a way that Curtis does not. In an elegant preface, Stevens positions 1895, Keaton’s birth year, as a pivotal time of transition, “not yet the 20th century, but the still unreadable sign of what it might become.” Marconi has only just managed to “broadcast radio waves over a considerable distance”. Freud comes up with the idea of ​​analyzing his patients by interpreting their dreams. And in the basement of a Paris café, the Lumière brothers show their moving images for the first time to a paying audience.

Buster emerges in the new century as an agent of what we would now call disruption. He, Chaplin, and Keaton’s filmmaking mentor, Roscoe “Fatty” Arbuckle, are not just pranksters, but entrepreneurs, early adopters of new technology whose cleverness and foresight earn them tons of money and admiration. Like today’s tech bros, they meet a mixed bag of lots. Chaplin is the most respected, but spends his later life in a gilded prison of his own importance and melancholy. Arbuckle is overthrown by a scandal in which he is accused of murdering a young actress and later acquitted, but not before his career is in ruins. (Stevens, a fierce Arbuckle defender, portrays Keaton as a loyal friend who gives Roscoe work after the scandal as a prankster and uncredited co-director.) Keaton is the least businesslike — terrible at making deals, hence his never-stop performing – but the most purely creative, a workaholic whose passion is making jokes.

Stevens is clearly fond of her subject matter, describing him as a “solemn, beautiful, everlasting man in the sky.” “Camera Man” is less of a traditional biography than a series of reported essays on 20th century progress centered on Keaton. Sometimes Stevens ventures too far, such as when she devotes most of a chapter to an unnecessary examination of the Hollywood struggles of F. Scott Fitzgerald — a man Keaton was apparently unfamiliar with — on the grounds that both men were alcoholics with marital problems who were unhappy at the same time at MGM.

But Stevens is sharper when she focuses on side effects such as the rise of serious film criticism, an entirely new writing discipline. She marks the precise moment, in a review of Keaton’s 1923 feature film “Three Ages,” when Life magazine’s Robert Sherwood “propels film criticism in a new direction as he takes events outside the theater to influence his experience in them” by praising Keaton’s ability. . “to keep this much-molested human race in a good mood, at a time when it has nothing but high taxes, United States senators, coal strikes, banana shortages, wrong numbers and Signor Mussolini to think about.”

Nearly a hundred years later, while we’re faced with an almost identical list of annoyances, giving or taking a last name, Keaton’s lovingly crafted shorts and features still have this beneficial effect. Curtis and Stevens did well to bring the boy back from the dead with the funeral phrase.