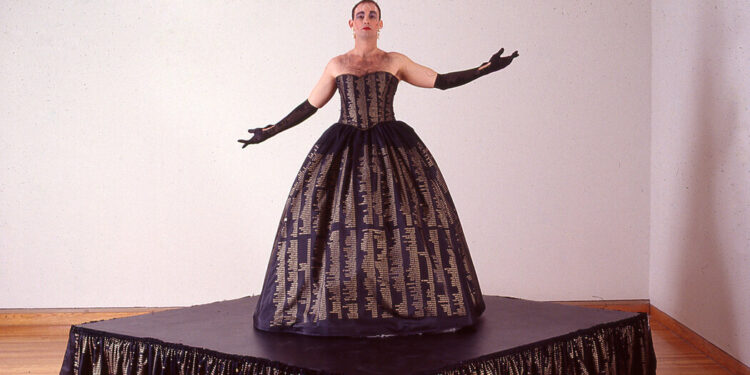 One night in 1989, Hunter Reynolds, then a 30-year-old artist living in New York City, made himself at home with the help of a friendly drag queen. He was intrigued by the results: his handsome face embellished and transformed, neither male nor female, like an androgynous cabaret star in Berlin during the Weimar years. He donned a tweed coat and headed out to various events in the art world. Friends didn’t recognize him, so he pretended to be a performance artist from Los Angeles.

As a gay artist, Mr. Reynolds already interested in exploring the boundaries and possibilities of gender. A gay man recently diagnosed with HIV and a member of ACT UP, the grassroots protest group founded by Larry Kramer and others, he stood on the front lines of the fight against the disease that would eventually kill him — and against homophobia in politics. , healthcare and the art world that made the struggle so much more urgent. Making art that focused on his body would become increasingly important to him.

Before long, he had developed an alter ego that he called Patina du Prey. For Patina, Mr. Reynolds designed a wardrobe of dresses—pre-war, full-skirt numbers made of satin, organdy, and taffeta, with stiff bodies in the shape of Mr. Reynolds’ very masculine torso, showing off his hairy chest and muscular arms. The gowns became more elaborate as Patina’s performances did.

In an early work, Patina wore blue taffeta and hung for hours on end from a cage in a gallery. In 1992, in a piece called “The Banquet”, held at the SoHo gallery Thread Waxing Space, he spun slowly on a pedestal, like a ballerina from a music box, in a white satin gown printed with images of drops of his blood and the hair of a co-worker, Chrysanne Stathacos—the prints looked like roses and delicate vines—as attendees snacked on a banquet laid out on a naked man, and women dressed as maenads read feminist lyrics aloud. Mr. Reynolds and Mrs. Stathacos paid tribute to a 1951 surrealist work, Meret Oppenheim’s “Spring Feast” – but while that work served its meal to a naked woman, they emphatically used a man for theirs.

One of the most moving pieces by Mr. Reynolds—and Patina’s star turn—was a black satin gown printed with the names of 25,000 AIDS victims from the AIDS quilt catalog, which he made in 1993 as a living memorial. When Mr. Reynolds first presented it in a Boston gallery, spinning for hours on a pedestal, as was his custom, people wept as they discovered the names of friends, relatives and loved ones.

Mr. Reynolds died on June 12 at his Manhattan home. He was 62. Wendy Olsoff, a founder of the PPOW gallery at TriBeCa, said the cause was an aggressive form of squamous cell carcinoma.

“Hunter bore his pain and his suffering, and he did so with honesty and grace,” said Anne Pasternak, the director of the Brooklyn Museum and former director of the public arts organization Creative Time, who partnered with Mr. Reynolds in 1994 to present the Memorial Dress and other works commemorating the 25th anniversary of the Stonewall Rebellion. Mr. Reynolds wore the dress all over Manhattan, dropping the bodice onto the steps of the New York Public Library headquarters.

Ms. Pasternak had met Mr. Reynolds years earlier when she curated his work at a gallery in Hartford, Conn., and appeared as one of the maenads in “The Banquet.”

“He didn’t hide his HIV status,” she said in a telephone interview. “He wrapped himself in it, especially with the Memorial Dress, his own virus-infected body centered in it. I don’t think I understood at the time what a brave move it was.

“It was like saying, ‘Don’t you dare look away.’ And you couldn’t look away. There he stood, spinning on his platform and saying, “This is me. This is us.'”

Hunter Wayne Reynolds was born on July 30, 1959 in Rochester, Minnesota, to Robert and Danielle (Dusseau) Reynolds.

His parents divorced when Hunter was 7. Hunter grew up in Florida and then, at age 15, moved to California to live with his father, who was unemployed and trying to make it as an actor.

Hunter worked as a lifeguard, in the mailrooms of an insurance company and an accounting firm, as a disco dancer at parties, and as a switchboard operator. After receiving his high school equivalency diploma, he attended the Otis Art Institute of Parsons School of Design in Los Angeles (now the Otis College of Art and Design) and, after receiving a BFA in 1984, moved to New York City.

Mr. Reynolds was a founding member of ART+Positive, an ACT UP affinity group, as such spin-offs were known, of activist artists galvanized to protest homophobia with flyers, artwork, and other actions of the Helms AIDS amendments, sponsored by conservative Republican Senator Jesse Helms, banning federal funding for AIDS education.

In addition to Patina’s escapades, Mr. Reynolds a series he called “mummification.” For that job, a tougher exercise, he was wrapped in plastic wrap and packing tape and pulled through sites on a loading cart, or placed in a gallery or public park, after which assistants cut off his shield and released him.

He also made two-dimensional pieces: his “Survival AIDS” series consisted of photo weaving in which he stitched together articles on AIDS published in DailyExpertNews with photo scans of his own work, spatters of his blood and other imagery.

Of the many accolades he has earned, Mr. Reynolds was a Guggenheim Fellow in 2017.

Mr Reynolds is survived by his mother, who now goes by the name Danielle Englander; his brothers, Mark Reynolds and Brian Reynolds; and a sister, Tasha Reynolds.

Patina made its way around the world, from Santa Monica’s Spierstrand to the Berlin subway, from Roman ruins to Gothic cathedrals. She often danced with passers-by, dressed in clouds of tulle and looking like a cross between a whirling dervish and a bride. These photos were taken by the photographer Maxine Henryson in an ongoing eight-year collaboration they dubbed “I-Dea The Goddess Within.”

In 1997 their work was shown at the Linda Kirkland Gallery in Manhattan. The show was mostly still photos, but Patina’s white dress was there too, placed in the center of the gallery, “as if frozen in the middle of a bow and surrounded by a halo of dried flowers,” wrote Holland Cotter of DailyExpertNews. . in a review. It was, he added, “the emblem of a brilliant but politically oriented performance about liberation that is still in full swing.”