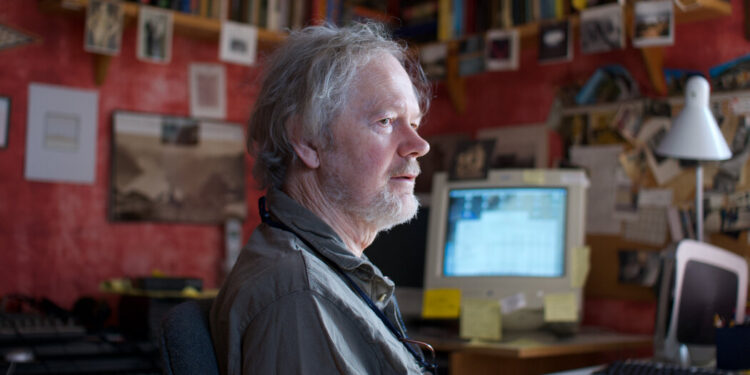 I first got to know the composer Ingram Marshall, who died on May 31 at age 80, as a campus personality. Benevolent and a little spectral, he would sneak into Yale’s music library, where I had a work-study job as a student, and I’d help him find scores and recordings. I already knew a few of his pieces and was kind of awestruck talking to their creator. His musical and lifelike personalities seemed directly related: unhurried, easygoing, more inclined to follow a train of thought than pursue a rigorous argument, but unafraid to let the conversation get serious or philosophical.

Our conversations broadened during my studies with Marshall in graduate school. His teaching style was clearly not strict, but discursive and all-encompassing. In one lesson, we had as much opportunity to discuss a Bergman movie or the best way to cook wild mushrooms as we were to analyze what I was doing. Most of the time he was content to leave my music as I had written it; on certain occasions, he would point to a passage and say, “I like that part, it could be longer.” He encouraged me to take my time, focus on my ideas and work them out.

Marshall became a friend – just a great band and endlessly interesting to talk to. We drove to Sleeping Giant State Park north of New Haven, Conn., for riverside walks, or further inland to hunt morels and chanterelles in its secret spots. He got along easily with composition students; he treated us like colleagues, and as a result we weren’t afraid to speak openly around him.

Around the same time, I began to enjoy playing Marshall’s music, especially the solo piano piece “Authentic Presence” (2002). A grand fantasy in the tradition of Schubert and Chopin, it is full of contradictions and inexplicable things. The rhythmic language fluctuates widely between sustained pulse and total freedom. Sometimes the sentences are like continuous sentences; elsewhere they are poetic, rhetorical, full of pauses and hesitations. The music looks simple on the page, sparse on clues that are almost unfathomable – a challenge for interpreters to form their own ideas, but also a gesture of respect, entrusting the music to the care of the performer. “Authentic presence” manages to feel heavy, but also ephemeral, grand without pomp, restrained in execution but not afraid of dramatic gestures.

These qualities, constants of Marshall’s style throughout his career, made his voice one of the most personal and distinctive of all composers in recent history. With an unlikely amalgamation of loose, stream-of-consciousness forms and old-fashioned contrapuntal technique, he constructed monoliths of sound and obscured them. He wove elaborate textures from canons, inversions, extensions and reductions. His gamelan-inspired arpeggios gently wave in and out of sun and shade. Frequent quotes and references give the music a sense of porosity and changeability. Everything coexists in what feels like a physical acoustic space – rich and reverberating, but also distant, kept at bay, seen through a thick fog. Above all, there is the emotional flavor of it. For him, music was not just an abstraction, an intellectual play of pitches and shapes. It was also about saying something sincere.

Likewise, Marshall’s use of technology was never intended alone. He valued equipment only insofar as it enabled him to achieve a musical and expressive result. In the spacious “Gradual Requiem”† composed in the late 1970s, an idiosyncratic ensemble – of piano, mandolin, synthesizer, Balinese flute, pre-recorded choirs and eight-channel tape delay – guides the listener through a gently epic musical journey from sound design as composition, with electronic and acoustic elements blend seamlessly, mute and envelop each other. This requiem creates a sacred space without words, using layer after layer of reverberation and delay to build an infinitely large cathedral around the music.

Much of the music most dear to Marshall was sacred: New England-esque songs, Bruckner motets, the gamelan music of Java and Bali. Although he had grown up as a Methodist choirboy, his own beliefs were equally varied and idiosyncratic, and a deep sense of spirituality runs through his work. Grief returns, as does dealing with death, even finding a kind of ecstatic joy in the expectation of it. ‘Bright Hour Delayed’ from ‘Hymnodic Delays’ (1997), records the dashing Sacred Harp hymn “Northfield” as the theme: “How long, dear savior, o how long / will this bright hour delay?” Marshall slows it down by a factor of four, spreading the voices and letting the melodies hang lamentably in the air, echoing in the distance like a musical question mark.

In “Kingdom Come” (1997)† mourning becomes a kind of ritual that connects the individual to the universal pool of human grief. The piece opens with a series of chords in A minor, spiraling upwards (a reference to Marshall’s beloved Sibelius) and then slowly, painfully, drifting downward in a painful lament. We end up in a deep, dark F major stew, from which bits of “Nearer, My God, to Thee” emerge. (Charles Ives, another composer who used that hymn, is a clear reference point; Marshall and I shared adoration for our fellow New Englander, particularly his ability to combine seemingly disparate elements into a powerful emotional salmagundi.) As momentum gains momentum. , “Kingdom Come” becomes a slow-motion procession, a chorus of mourners gathering. Despite the restless affect and a few shocking outbursts, it is not theatrical music; it always looks inward in its search for associations, allusions and meaning .

Marshall’s eclectic approach to composition appealed to me. I felt like I had found a mentor who handled music the way I wanted to: with curiosity, open-mindedness, and little regard for historical period or genre. He gave the impression that all the music lay in a huge pile at our feet, fodder for inspiration. That’s not to say he liked everything or was uncritical. He could be downright dismissive of composers he saw as overly academic, technically flashy, or too enthusiastic. But his standard approach to life and music was one of generosity.

People who knew him often commented that Marshall seemed egoless; he didn’t pursue, network, or graduate the way artists of my generation have been trained. He did have an ego, of course, as you must to pursue an artistic craft so purposefully; he just managed to keep it admirably separate from his personal interactions. While he did not aspire to fame and fortune, he certainly wished for more fame. On his blog, Old Man of the Woods, he complained in 2013 about the “small” commissions he was getting. “There has been nothing substantial, just a few chamber and solo pieces. Frankly, it’s depressing not to have a big job on the drawing board.”

The source of the frustration was not always external; he was a slow and meticulous writer, sometimes working for years on end before molding it into a shape that satisfied him. But once he did this, he thoroughly enjoyed hearing his own music and was justifiably proud of what he felt were his most successful works. And in his own funny, calm way, he enjoyed the attention and validation of his creative struggles. A few months ago, I was interviewed about his work on Joshua Weilerstein’s music podcast, and Marshall was thrilled. “I loved all that admiration,” he wrote to me in an email. (Weilerstein conducted my piano concerto ‘The Blind Banister’ in 2015.)

In 2016 Marshall said he would like to write something for me – maybe a concerto. I immediately called his old friend and steadfast champion, John Adams, who was arguing with a Los Angeles Philharmonic committee. The following year, “Flow,” a chamber concerto, appeared and seemed to capture a little bit of everything from Marshall’s voice. The piece begins in a beatific stasis in C major, while a merry hymn gains momentum in canonical form. Then a series of escalating musings on another hymn, “Shall We Gather at the River?”, first on a solo viola, built up into a fiery orchestral tutti. Then suddenly we’re in Indonesia, piano and percussion leapfrog in music as puck-like and energetic as anything Marshall has ever written. Pentatonic arpeggios pile up in multiple keys; a polytonal roar escalates and evaporates. Marshall was working on the last page. When the final revision arrived, days before the premiere, I was moved to discover that the closing notes were a quote from my own piano piece “At The River,” which I dedicated to him in 2011.

Of the many obscure, unpublished, unrecorded works in Marshall’s catalog, my favorite is a setting of Emily Dickinson’s “As Imperceptibly as Grief” — mainly because it almost feels secretive. Marshall was never completely happy with the song and never got around to reviewing it. The last line “Our Summer made her light escape / Into the Beautiful” is extended over five repetitions, swinging gently between C and F, the simplest chords imaginable. In barely a minute, it conveys a sense of timelessness, and also of the end of time. But the song doesn’t end with a fade out. The last gesture comes as a surprise: a sudden, brilliant cascade from opposite ends of the keyboard to the center, a carillon from beyond. That “bright hour”, long delayed, has finally arrived.