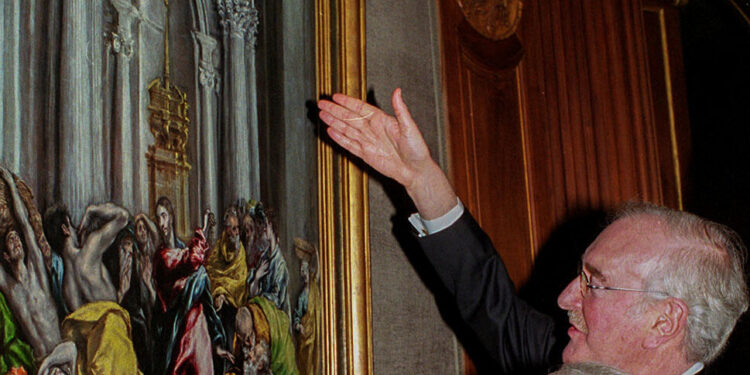 Jonathan Mayer Brown was born on July 15, 1939 in Springfield, Massachusetts. His father, Leonard M. Brown, was an insurance salesman; his mother, Jean (Levy) Brown, was a librarian. Both were avid art collectors, who regularly traveled to Manhattan, where they picked up small abstract expressionist works by Jackson Pollock, Philip Guston and Franz Kline. Jean Brown later became an important collector and patron of the experimental, interdisciplinary art movement Fluxus. (Her huge archive of Fluxus material is now located at the Getty Center in Los Angeles.)

Professor Brown entered Dartmouth College in 1956, where he initially studied Spanish literature. And during his junior year in Spain, where he read Ortega y Gasset’s 1948 book on Velázquez and encountered the artist’s work ‘live’, he shifted his focus from literature to art.

After graduating from Dartmouth, he enrolled as an art history student at Princeton University, where he received a Ph.D. in 1964 with a dissertation on Sevillian Baroque painting. He began teaching there and after his first book, “Italy and Spain, 1600-1700”, was published in 1970 and was awarded the Arthur Kingsley Porter Prize by the College Art Association of America, he was named an associate professor.

In 1973, New York University recruited him as director of the Institute of Fine Arts, the university’s graduate program in art history. He was appointed full professor there in 1977 and continued to teach for 40 years until his retirement in 2017, mentoring generations of teachers and curators.

Over time, his own books and exhibitions came in a steady stream. He wrote or contributed to monographs on El Greco, Francisco de Zurbarán, Jusepe de Ribera and Bartolomé Esteban Murillo, most of them at exhibitions he curated or collaborated on. In 1986, he published the landmark “Velázquez: Painter and Courtier”, an acclaimed critical biography of the artist. His 1991 book “The Golden Age of Painting in Spain” (expanded in 1998 and republished as “Painting in Spain 1500-1700”) is widely regarded as the standard overview of the subject.