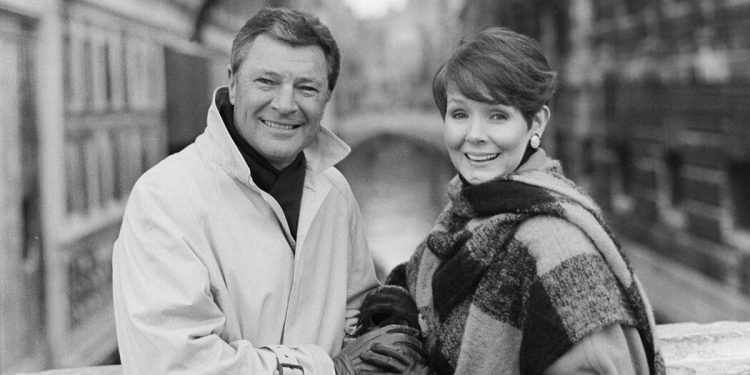 Kathryn Hays, an actress who had a brief but memorable turn in the 1960s television series “Star Trek” but who had an enduring appeal as a staunch soap star in “As the World Turns” for nearly four decades, died on March 25 in Fairfield, Conn. She was 87.

Her daughter, Sherri Mancusi, confirmed her death in an assisted living facility.

ms. Hays was originally cast by daytime drama writer and creator Irna Phillips on a six-month contract, but ended up as an integral part of “As the World Turns,” which ran on CBS from 1956 to 2010.

By the end of Ms. Hays’ long run on the show, her character, Kim Hughes, had become the de facto matriarch of the drama’s fictional town, Oakdale. The character was known for her catchphrases, often calling people “kiddo” or “toots.”

Ms. Hays balanced the demands of shooting an episode a day with humor and close relationships on set, her daughter said, recalling that her co-stars nicknamed her “One Take Kathy.”

Ms. Hays was known to fans of the original “Star Trek” television series for the episode “The Empath” (1968), in which she played Gem, a mute alien with healing powers who rescues a badly injured Captain Kirk (William Shatner). † Her extensive film credits include ‘The Man from UNCLE’, ‘The Road West’ and ‘Law and Order’.

Ms. Hays often spoke about her love for the character Kim Hughes and the soap format in general.

“I think if you look beyond soap operas, you’ll see that people like to have a continuous story,” she told Entertainment Weekly on the occasion of the show’s finale. “They like to read sequels of books. They like to see sequels.”

Kim Hughes experienced standard soap operas in ‘As the World Turns’, from extramarital affairs to amnesia. But she also appeared in more current storylines. One episode, in the 1970s, dealt with marital rape, an issue not often discussed publicly at the time.

In a 2010 interview with the website “We Love Soaps,” Ms. Hays said at the time, “I didn’t even realize that was controversial. But it was.”

As Mrs. Hays got older, her character matured. Kim Hughes started out in 1972 as a stereotypical “home destroyer.” But after several marriages and countless twists and turns over the years, she and her husband, Bob Hughes, played by Don Hastings, left the 2010 finale happily married.

The character, Ms. Hays said in the 2010 interview, “started out one way and then turned into someone else.”

“She turned into a deeper character, and that was great,” she said of Kim. “She has chosen to be considerate of others. You’ve seen her grow through those years.”

But even her character’s maturing couldn’t completely suppress the occasional catfight that a soap opera can stimulate. “What was great for me was the knowledge that if Kim was pushed too far or too hard, she could turn around and cover you,” said Ms. Hays. “Verbally, not physically. The audience loved it.”

Kay Piper was born on July 26, 1934, in Princeton, Illinois, to Roger and Daisy (Hays) Piper. They divorced shortly after her birth and Kay was raised by her mother, who was a bookkeeper and banker, and her stepfather, Arnold Gottlieb, a salesman.

Kay graduated from Joliet Township High School and then attended Northwestern University. After changing her name to Kathryn Hays in 1962, she modeled in New York and Chicago before finding work as an actress.

She was married three times to Sidney Steinberg, a salesman; the actor Glenn Ford, known for films such as “The Blackboard Jungle” (1955) and a series of westerns in the 1960s; and Wolfgang Lieschke, who worked in advertising.

In addition to her daughter, she has three grandchildren and one great-grandchild.

The US House passes bill to protect same-sex marriage

With only 2 wins, ‘Royals’ are losing their charm in Himachal Pradesh

A year lasts only 17.5 hours on the ‘hell planet’ | DailyExpertNews