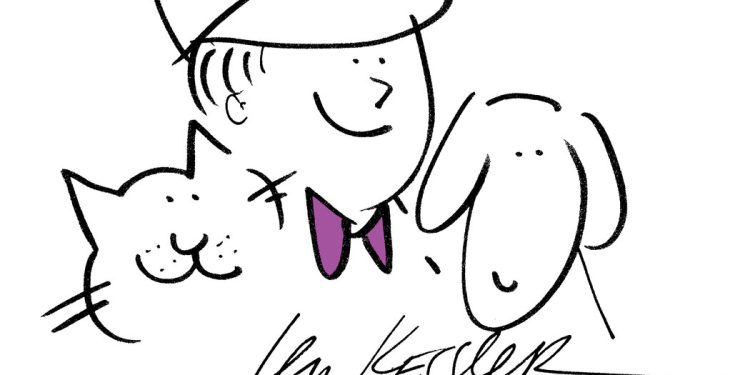 Mr. Kessler often found inspiration in the everyday. For example, the hunger pangs of a little boy going to the supermarket are magnified in ‘Crunch Crunch’ (1955), the sequel to ‘Plink Plink’, a book about being thirsty.

The Big Red Bus, about a bus that ends up in a pothole, snarling traffic, was chosen by DailyExpertNews as one of the best-illustrated children’s books of 1957. In 1990, it was a Times crossword (“‘Author of Big Red Bus,’ 5 Down).

Leonard Cecil Kessler was born on October 28, 1920 in Akron, Ohio. His father, Albert Lewis Kessler, was a plumber; his mother, Lillian (Rabinowitz) Kessler, was a nursing assistant. Leonard grew up in Pittsburgh, in a neighborhood of European immigrants, where he met his future wife, Ethel Gerson. They married in 1946, when he returned from World War II. In France and Germany he had served as an intelligence scout and crept behind enemy lines in the dark to report his positions, which he depicted in atmospheric sketches.

Planning to become an artist, he attended Pittsburgh’s Carnegie Institute of Technology, now Carnegie Mellon University, on the GI Bill, where he shared studio space with other returning military personnel and a very shy 18-year-old named Andy Warhola. After graduating with a BFA in 1949, Mr. Kessler and his wife moved to Manhattan.

A few years later, in 1953, the Kesslers decided to sublet their apartment to Mr. Warhola (who had since changed his last name to Warhol), who needed a bigger house: his mother, Julia, would come to live with him, along with with her 25 cats, all named Sam.