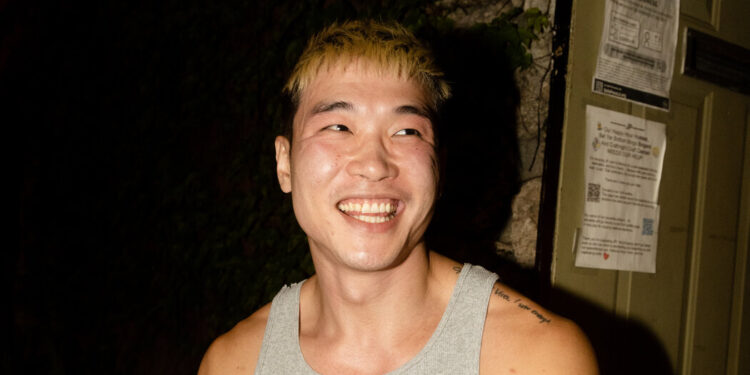 Ahn was outraged, but when he told the story, Booster just nodded. “As a comedian, with everything I’ve done so far, I just have to be funny, you know?” said Booster. “But with this I would have to be a romantic protagonist, and it’s a lot for me in my life to be faced with that and thinking, ‘Am I that guy? Is this believable?’”

Booster had never been in a relationship before he started writing “Fire Island,” and everything he knew about love, he’d learned from watching Nora Ephron movies. But when “Fire Island” went into production, Booster met video game producer John-Michael Kelly, and something in him softened.

“I just never met anyone who made me not want to be alone until I met him,” Booster said.

He began rewriting the scenes he shared with Ricamora, drawing on real conversations he’d had with Kelly. And the film’s final beat between the characters, which initially culminated in a lighthearted joke, was tweaked to come out with something sweeter and more romantic. “It was like being dragged along when I first wrote the movie about love,” Booster said, “and once I experienced it and rewritten it, it felt a lot more real and alive.”

The film has received great reviews and Booster heaved a sigh of relief: “When I made it,” he said, “I thought, if this movie is bad, I can never show my face here again. I just found my favorite place on the world.’” And yes, he and Yang are both planning to return to the island this summer.

“It’s going to be extreme weird,” said Booster. “I’m either persona non grata or the mayor.”

Booster shrugged: he’ll know when he knows. “I guess it hasn’t quite happened to me yet,” he said. “I don’t get Grindr messages about it.”