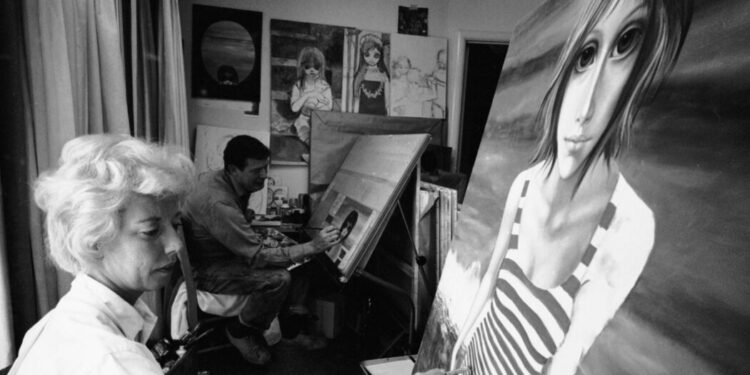 Margaret Doris Hawkins was born on September 6, 1927, in Nashville, the eldest of two children of David Hawkins, an insurance salesman, and Jessie (McBurnett) Hawkins. Margaret and her brother, David, attended public schools.

In a 1975 article for the publication of Jehovah’s Witnesses, Awake, she described herself as “a sickly child, often alone and very shy,” who developed a passion for drawing early on. Her family attended a Methodist church, where she was known for her sketches of wide-eyed angels.

At ten, Margaret took art classes at the Watkins Institute (later known as the Watkins College of Art, Design and Film). Her first oil painting depicted two little girls, one crying and one smiling. At the age of 18, she attended the Traphagen School of Fashion in New York City, an art and design school.

Ms. Keane returned to California in 1992. She founded her gallery in San Francisco, bought a house north of the city and continued painting and selling her work for over 25 years. For the past few years she lived with her daughter in the Napa area. After the release of the film of Mr. Burton and a book, “Citizen Keane: The Big Lies Behind the Big Eyes” (2014), by Adam Parfrey and Cletus Nelson, got the work of Ms. Keane a revival of the public eye.