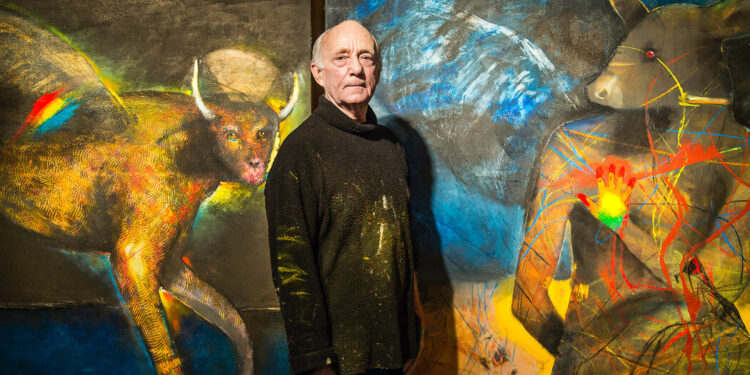 Marshall Arisman, an illustrator whose provocative and often violent work appeared in DailyExpertNews, Playboy and other major magazines from the 1960s, died April 22 in Manhattan. He was 83.

His wife, Diane Ito Arisman, said the cause was heart failure.

Arisman’s art as well as his teaching practice have been characterized by his ability to tell stories, his friend and colleague Steven Heller, a former art director at The Times, said in an interview.

He was, Mr. Heller said, “the kind of teacher people would just lean on to absorb his storytelling technique.” He added: “He was a great storyteller. And most of it was true.”

Mr. Arisman has mined his personal biography for inspiration and he encouraged his students to do the same.

His interest in spirituality influenced much of his artistic career. His grandmother lived in a community called Lily Dale in upstate New York, which labeled itself the “center for mediumship and spiritual healing of the state.” Founded in 1879, Lily Dale was associated with the spiritist religion, which holds that the living can communicate with the dead through the spirit world.

His grandmother, herself a practicing medium, had a major influence on his life and work: he eventually co-directed a documentary, “A Postcard From Lily Dale” (2014), with Francesco Portinari, about her life and the ways in which paranormal phenomena shaped his life. artistic career. He also believed in the concept of reading auras, completing many paintings of monkeys and bison with auras glittering around them.

Mr. Arisman’s painting style was described by Vice as “dark and otherworldly,” for which he was interviewed in 2017.

In the interview, he recalled one of his most formative and controversial pieces, a 1981 cover of Time magazine with the headline “The Curse of Violent Crime.” The cover shows a man with red eyes and metal over his face with a revolver to his head. Many viewers found it disturbing, but Mr. Arisman saw it as a reflection of real violence.

“Have you opened a newspaper?” he recalled asking Time executives when they found a later image, for an article on the death penalty, too graphic. “They are killing people in electric chairs. It’s violent.”

“He made those sociopolitical statements and did it in a way that was a bit of a cartoon,” Mr. Heller said, “but more of a cartoon like Goya or George Grosz would make cartoons.”

Mr. Arisman’s art was also a fixture in Playboy, Penthouse, The Nation and The Times’s Opinion section and Book Review. He designed covers for a limited-edition reissue of Thomas Harris’s novel “The Silence of the Lambs” in 2015 and Bret Easton Ellis’s novel “American Psycho” in 1991 – both featuring a violent murderer as the central character.

Marshall Alexis Arisman was born on October 14, 1938, in Jamestown, NY, to Walter Arisman, a dairy farmer and farmer, and Helen (Alexis) Arisman.

He grew up in Jamestown, near Lily Dale and his grandmother. He said in the Vice interview that he and she would make art together every Sunday. The hunting culture of rural New York inspired some of his early work on violence in America. He was living in Manhattan at the time of his death.

After graduating from the Pratt Institute in Brooklyn in 1960 with a degree in graphic design, he began working as a designer at General Motors. After three months he became a full-time illustrator.

He served in the army for six months in 1962 and remained in the army reserve for seven years. He married Dianne Ito in 1964. His wife is his only immediate survivor.

In 2002, director Tony Silver profiled Mr. Arisman in the documentary ‘Arisman: Facing the Audience’. In 2017, Mr. Arisman was the subject of a retrospective exhibition at the School of Visual Arts.

His work can be found in the permanent collections of the Metropolitan Museum of Art, the Brooklyn Museum, the Smithsonian American Art Museum, and other prominent institutions.