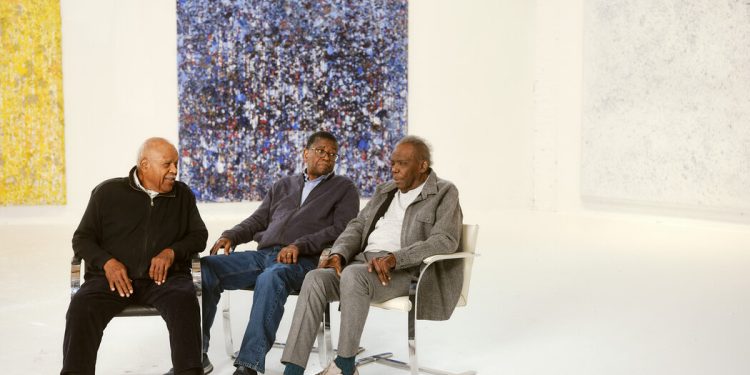 What explains the length and depth of your friendship?

Melvin Edwards: Well, you know, I’m someone who takes things for granted. They were just easy to be friends with, and that was it. Every time we got together, we enjoyed each other, we talked to each other. You know, we argued, discussed, we had disagreements.

Sam Gilliam: Let’s say they are my creative partners. I really like the work of both Mel and Bill, and every time we work together it makes us competitive, not to be outdone by the other. I always get excited when I get the chance to exhibit with them, because I’m going to come up with something special. It’s because I know if I don’t…as Mel would say, you’d have to wear red shoes to keep up with us!

ME: There to be it can go in so many directions, because you’re talking about a series of relationships that started in the 60s. And that was 60 years ago. That’s honestly encyclopedic. And we’ve all gone through so much with it. You know, when you give the ball to Willie, you don’t know where it’s going. You look up and say, “Well, wait a minute. He just scored.’ You know? And that’s the way it is: having faith in each other, that our abilities and intentions will work.

William T Williams: I think part of our everlasting friendship has a lot to do with common interests, and the feeling that a lot can be done. Sam was in Washington. Mel and I were in New York. And over the years there was a constant dialogue, over the phone or, sometimes literally, halfway through a meeting down. Sam was going to come to Baltimore; we would go to Baltimore, have lunch there and have a meeting about an exhibition or some ideas we had. It’s a friendship that went beyond the art world, and an interconnectedness of three people that had a lot to do with art, but more with the three individuals as people. A sense of their ambitions, their commonality and just having fun together.

ME: I was chewing on Sam the other day because I remember him playing tennis. He was practically a tennis socialite in Washington. I’ve never played. I love to run five meters and punch someone. That means I was a footballer. I know Willie was involved in the track and was a wide jumper. So those are things we’ve learned about each other over the years. Teasing and talking is natural. That fine art was our arena – well, we worked out our own variations. And when we met, we found ways that they could work [together]†