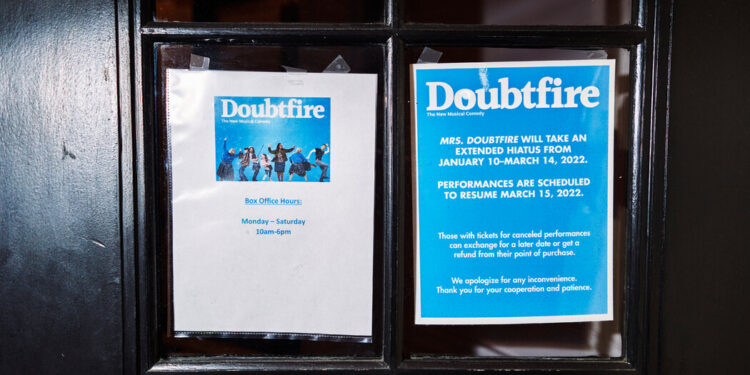 The Broadway musical “Mrs. Doubtfire,” which was temporarily closed last month as Omicron ravaged New York, announced Friday that it would postpone its reopening until April 14, a month later than expected, to give the theater economy some more time to recover. to recover.

“The good news is that it appears that the virus is subsiding, but there are still many unknowns,” said lead producer Kevin McCollum. “It was just clear that April was a better time to open, given the trends with tourism and thinking about when families and groups will feel comfortable.”

The hiatus left the show’s cast, crew, and musicians out of work (at least on “Doubtfire”), but McCollum said he thought it was the best way to try and keep their jobs longer. And on Friday, he said he invited the entire cast to come back, and hoped they would.

The musical, adapted from the hit 1993 film, has taken a bumpy road: After an out-of-town run at Seattle’s 5th Avenue Theater, its Broadway previews began on March 9, 2020, just three days before the coronavirus pandemic forced all theaters close. After a 19-month hiatus, the show resumed previews last October and opened December 5, to mixed reviews, just as Omicron caused the case count to skyrocket again.

“If there was an award for worst timing for a producer, I’ll take it,” McCollum said. “My timing was terrible.”

But McCollum said he believes the show will work if given the chance, and is determined to try and keep the jobs of his company, many of whom have been working on the show for several years.

“The easiest way would have been to say, ‘Okay, we’re done,’ but the show told us we weren’t ready yet,” he said. “We just never got our sea legs because of Omicron.”

An added benefit of the April reopening: Tony nominators and voters who didn’t see the show before the break began on January 10 will now have one more chance to do so before casting their vote. (This year’s Tony calendar has not yet been announced, but the season is expected to end at the end of April, followed by nominations, votes and an awards ceremony.)

“Mrs. Doubtfire” is written by Karey Kirkpatrick, Wayne Kirkpatrick and John O’Farrell, and directed by Jerry Zaks. A second production of the show is slated to perform in Manchester, England, in September.

“Mrs. Doubtfire” was the first of three Broadway shows to announce a temporary closure because the Omicron wave was shrinking audiences – “To Kill a Mockingbird” closed on Jan. 16 and said it would be in another theater on June 1. reopen, while “Girl From the North Country” closed on Jan. 23, saying it hoped to reopen in the spring. (Six other shows have closed for good.)

Unions representing actors and musicians did not immediately respond to requests for comment on the “Mrs. Doubtfire” plans. D. Joseph Hartnett, director of the theater division of the International Alliance of Theatrical Stage Employees (IATSE), said his union, who represents stagehands hadn’t heard from the show and “assumes production has officially closed and still is. †