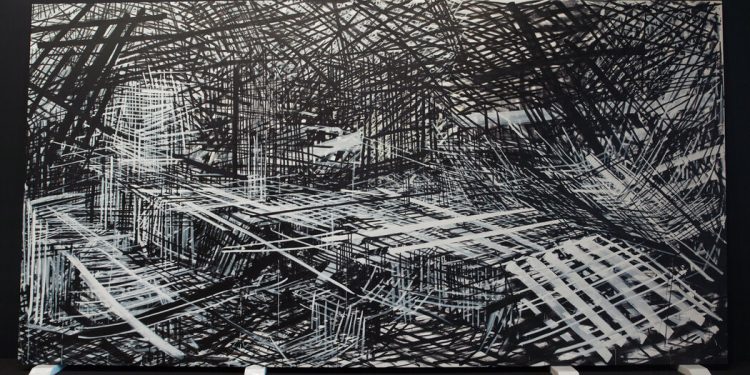 On a cloudy day in late July, thick with humidity and wetting drizzle, I went from Manhattan to the Bulova Corporate Center in Queens in search of my ghost.

Until 2017, the Queens Museum had a satellite gallery in Bulova and hosted artist exhibitions there. The Denyse Thomasos show was one of them. Thomasos, a brilliant abstract painter from the Caribbean and Canada, created bold, mural-sized canvases that evoked an architecture of floating cities, prisons and slave ships. Then, in 2012, on July 20, she died suddenly of an allergic reaction during a diagnostic procedure. She was 47.

Somewhere in Bulova, a 1993 painting, “Prison,” had been left behind, bought by Blumenfeld Development Group, owner of the building, and I was determined to find it with my colleague, David Breslin, with whom I hosted the upcoming Whitney Biennale. And so we found ourselves wandering the corridors of this once Art Deco gem.

We found “Prison” wrapped in a wooden frame with a Plexiglas front in one of the vestibules. As we approached the painting, the monumental scale loomed above us with Thomasos’ clear visual lexicon, an intense use of closely overlapping black and white lines that created a sense of spatial distortion. For the artist, these hatches were a means of recording time, like journal entries. Their concentrated, tethered and rigorous application had a shocking effect: to really behold the work, we had to distance ourselves from it, distance ourselves.

“Jail” (1993) is one in a triptych of paintings made during the artist’s early years, alongside “Displaced Burial/Burial at Gorée”, the first of her large-scale works, and “Dos Amigos (Slave Boat)† These works span the range of Thomasos’ social, political and historical missions and her intense research into the Central Passage of the transatlantic slave trade, the consequences of immigration and the architecture of incarceration. All the while, her paintings recognize the impossibility of ever depicting these histories and their aftermath, testing the ability of abstraction to convey them.

As Thomasos explained in a 2012 publication for an exhibition at the Janice Laking Gallery, “I used lines in deep space to mimic these claustrophobic conditions, with no room to breathe. To capture the feeling of confinement, I three large-scale black-and-white paintings made of the structures used to contain slaves – and left such catastrophic effects on the black psyche: the slave ship, the prison and the cemetery. These became archetypal to me. I started their forms in all reconstruct and recycle my works.”

Thomasos lived in Philadelphia from 1990-1995 while teaching at the Tyler School of Art at the height of the crack cocaine epidemic, which accelerated the insecurity of black neighborhoods and caused collapse in several cities. During this time she collected data on the proliferation of incarcerated people of color, as well as researching the Eastern State Penitentiary, a Quaker experiment in criminal justice reform that set the model for solitary confinement from 1829 to 1971, and featured her painting “Prison” is based.

This initial exploration would inspire her ongoing research into prison architecture and later the industrial prison complex. “I noticed the sleek architectural innovations and the vibrant, high-tech, constructivist color scheme,” she said of her painting process. “The prisons signify the complex fabric of interdependence between the poor underclass and larger social and economic issues, which I translate into my intertwining lines.”

Although Thomasos’ paintings refer to the systems and structures that make up our world, they are also deeply personal. The thick, opaque and heaping shapes also hint at the sense of exile her father felt, who died three months before she entered graduate school. In fact, “Displaced Burial” is believed to have been as much a memorial to him as it was to the enslaved slaves housed on the island of Gorée off the coast of Senegal before leaving for America, where she had been on her travels. She described her father as “a brilliant physicist and mathematician whom I have seen suffer from racism in Canada. I saw my father as a compelling character, a typical immigrant story of hard work and, ultimately, sacrificing one’s own life for the well-being and potential of his family.”

Twice an immigrant, Thomasos was born in Trinidad in 1964, moved with her family as a child to Toronto in 1970 and to the United States in 1987. Her grandfather, Clytus Arnold Thomasos, was the first and longest serving black speaker of the House. in the Parliament of Trinidad and Tobago, from 1961 to 1981.

She received a BA in Art and Art History from the University of Toronto in 1987 and an MFA from Yale University School of Art in 1989. Thomasos lived in the East Village with her husband, Samein Priester, and their daughter, Syann, until her untimely death. in July 2012. She was a professor at Rutgers, the State University of New Jersey.

While organizing the Biennale, David and I had talked about the importance of mapping the connections between artists we saw and figures who didn’t get the recognition they deserved. We’ve opened the door to what we now fondly call our “ghosts” with Theresa Hak Kyung Cha, an American artist and writer of South Korean birth, as well as Steve Cannon, the poet and playwright who founded the interdisciplinary gallery and A Gathering magazine. of the tribes, and it was as if a clarion call went off. Others began to appear.

About a year ago, curators Renée van der Avoird and Sally Frater invited me to give a keynote address at the Art Gallery of Ontario for a day of lectures on the work of Thomasos, of which I was unaware.

My research led me to the Queens Museum, to Thomasos’ current gallery owner, Shelli Cassidy-McIntosh, and her predecessor, Jill Weinberg Adams.

I realized that Thomasos was the one I’ve been waiting for – the one who nearly 30 years ago captures the unspeakable, the unsolvable, the unimaginable, that which cannot be represented, but perhaps only felt. As she said, “In general, I try not to give the audience a happy or dark experience. I try to give a complex experience.”

Among her distinctive qualities, she helped align the identity-and-systems-questioning conceptual art of David Hammons and Adrian Piper with the experimental abstract painting of Sam Gilliam, Ed Clark and Jack Whitten. She laid the foundation for the artists Julie Mehretu and Ellen Gallagher, although neither knew of her or her work.

As if to clear up any doubts I might have, when we finished installing Hammons’ public artwork “Day’s End” on Pier 52 last May, he handed me a book called “Quiet as It’s Kept.” Published in 2002 for an exhibition he curated in Vienna, it partly determined the current Biennale title. (The colloquialism is also taken from the first line of Toni Morrison’s “The Bluest Eye” and is the title of jazz drummer Max Roach’s 1960 album.) There were three performers on the Vienna show: Ed Clark, Stanley Whitney and Thomasos . Clark and Whitney finally got it right after many years; few know about Thomasos.

Somewhere along the way I started to wonder who was really haunting. Maybe I struggled with her art because I needed it. I needed her story, and maybe I needed some of the indelible fierceness she was known for. It seems impossible to know why we are attracted to the things we come to desire, other than their ability to open up. Those paintings touched me, gave me Thomasos and the themes of her work with the disturbing truth of their infinite resonance and amazing presence.

Some of the unspeakable themes in her art do not always relate to events of great magnitude. I’d say the most disturbing, the one that sets me off – quiet when kept – is what it means to be unnoticed. The sheer magnitude of her paintings rendered herself incapable of being overlooked, undermined, or ignored, even by those who could not fathom who she was or what she was doing. Not all incarcerations are physical. Some of the most violent, the ones that you have to negotiate on a daily basis, are misogynistic and racist, especially in the cases where they are intertwined.

Mr. Hammons and I had never spoken of Thomasos before. I felt the same specific and peculiar feeling when I received his book as when I first saw an image of ‘Displaced Burial’. I only visited one slave castle – the one on Gorée Island. It was as if Thomasos spoke to me through time and space, bolstering her argument through the series of what initially seemed like coincidences—and when the universe fell silent to reveal its boundless wisdom and our deep interconnectedness, it was finally heard.

Adrienne Edwards is a curator and director of curatorial affairs at the Whitney Museum of American Art. She is co-curator of the 2022 Whitney Biennale.