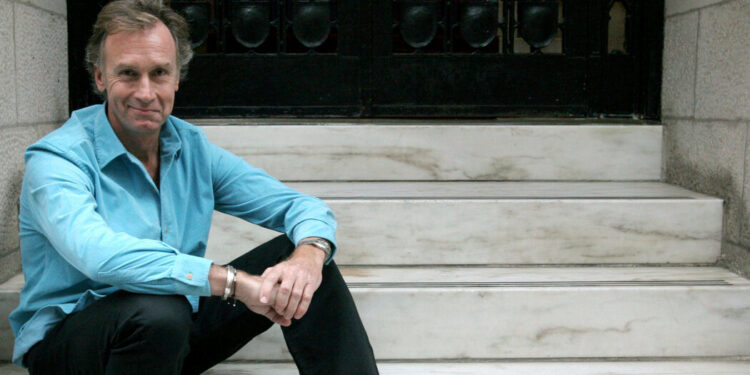 Nicholas Evans, the British journalist-turned-author whose novel and film, “The Horse Whisperer,” broke publication and film records, along with the hearts of readers who made the book a best-seller in 20 countries, died on August 9 at his house in London. He was 72.

The cause was a heart attack, said his longtime agent, Caradoc King.

In 1993, at the age of 43, Mr. Evans was broke and adrift. He had worked as a journalist and documentary filmmaker and had spent two years working on a film project that eventually collapsed when he started casting for an idea for a novel. It may not have been the most winning formula for world success, as he noted afterwards on his website: “Why should a debut novel by an unknown author have a better chance of getting off the ground than a movie?”

Yet he had found an intriguing subject: the mystical, masculine art of horse whispering. His source was a farrier and Mr. Evans soon discovered that the vocation of calming horses had a long history going back centuries.

In England, however, horse issues have too much class baggage, as he put it, so he looked to the American West for his story. He became trump when he met Tom Dorrance, a down-to-earth cowboy in his 80s, and saw him calm a maddened mare in California. He then found two other cowboys who practiced the same riveting magic, and began to create a character inspired by these three men.

Evans sat down and wrote some 150 pages of what would become ‘The Horse Whisperer’, a soap opera about a young girl and her horse being hit by a truck, and what happens when her speeding mother, editor-in-chief of the East Coast magazine finds a horse whisperer in Montana to heal their trauma.

The resulting healing involved more than the horse. Mr. Evans showed his draft to Mr. King, who sent the partial manuscript to a number of publishers on their way to the Frankfurt Book Fair that year. Suddenly, Mr. Evans found himself in the middle of a maelstrom of bids, juggling offers from both Hollywood and book publishers on both sides of the Atlantic.

When Bob Bookman, the agent at the Creative Artists Agency negotiating the sale of the film rights, asked Mr. Evans what he wanted, Mr. Evans suggested a modest $50,000. “I think we can get $3 million,” said Mr. Bookman, as Sarah Lyall of DailyExpertNews reported. And they did. Hollywood Pictures and Robert Redford’s film studio, Wildwood Pictures, won the bid, the highest amount ever paid at the time for the rights to a first novel (nearly $6 million in today’s money). Mr. Evans’s $3.15 million North American book advance from Dell Publishing set a new record.

Then Mr. Evans had to finish the book. He told Ms. Lyall that he had become morbidly superstitious: He stopped cycling and took the slow lane while driving. What he didn’t reveal, even to his agent, was that he had been diagnosed with melanoma.

Yet he survived, and prospered. The book, published in 1995, was a worldwide bestseller that was translated into 40 languages, although critics criticized it for its melodrama. Michiko Kakutani, writing in DailyExpertNews, called it “a juicy novel, full of sentimental nonsense about the emotional lives of animals and a lot of Walleresque hooey about men and women.”

“About the only thing missing,” she added, “is a photo of Fabio on the cover.”

The film, which came out in 1998, was more favorably reviewed and a modest box-office success, thanks to Mr. Redford as director. He performed a more subdued version of Mr. Evans’ story and played Tom Brooker, the horse whisperer. Kristin Scott Thomas was Annie MacLean, the mother, and Scarlett Johansson played Grace, the daughter. Sam Neill was Annie’s cheated husband. Mr Redford’s version ended rather ambiguously; Mr. Evans had taken a more confrontational route and was initially distressed by the change.

For better or for worse, Mr. Evans had unwittingly introduced the word “whisperer” into the popular lexicon as a catch-all term for experts who can tame complicated creatures, such as babies.

“It was an extraordinary event,” Mr. King said, remembering the frenzy surrounding Mr. Evans’ novel. “It was just the magic of the story. That’s what it was about.”

Nicholas Evans was born on 26 July 1950 in Worcestershire, in the West Midlands of England. He studied law at Oxford University and graduated with a first, highest honors. He worked as a journalist for newspapers and television and produced a weekly current affairs programme. In the 1980s, he made documentaries about the artists David Hockney and Francis Bacon, the writer Patricia Highsmith and the filmmaker David Lean.

He followed “The Horse Whisperer” with three more novels, all bestsellers. “The Divide” (2005), explores what led to the death of a young woman whose body is found in a frozen mountain stream. The story was inspired, he told The Associated Press, by his own interrogations into the causes of rifts in a marriage — a marriage that breaks down is the book’s backstory. His own 25-year marriage had recently ended, he said.

Like his characters, Mr. Evans was an avid outdoorsman, a charming Bill Nighy lookalike who skied and hiked. And in August 2008, he seemed to fall into the plot of one of his own stories, a family idyll turned into an almost tragedy.

Evans’ survivors include his wife and four children, Finlay, Lauren, Max and Harry.

His reviews became more positive with each book. Still, he tended not to read them.

“The book industry is so strange – and the definition of literary versus commercial fiction has always seemed bizarre to me,” Mr Evans told The Guardian in 2011. “One is determined by how much it sells, and the other by its ideas and so-called literary merit. And all kinds of assumptions are made about that. So, for example, if you’re selling tons of books, you can’t possibly have interesting ideas or themes or things to say. And on the other hand, if no one buys the book, it is considered a sign of appreciation, because no one is smart enough to understand it.”