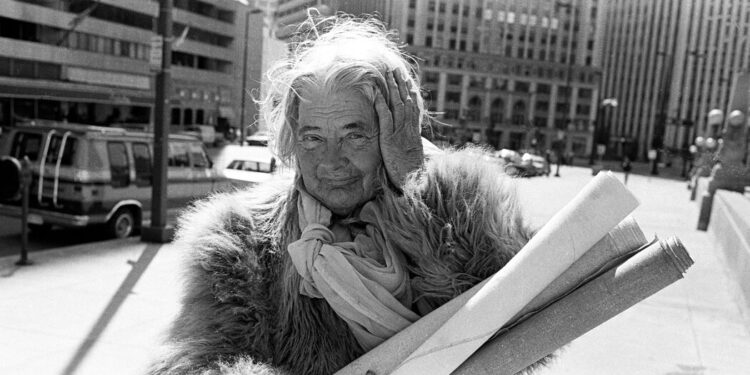 This article is part of Overlooked, a series of obituaries about notable people whose deaths, beginning in 1851, went unreported in The Times.

Anyone who passed through downtown Chicago in the ’70s or ’80s may have come across a weathered blonde woman wearing a rabbit fur coat and men’s orthopedic slip-ons when she peddled her art on Michigan Avenue. If you looked like a potential buyer, she would slowly, seductively, unfold her latest canvas as you approached.

Sometimes she would recite an old tune in her lilting voice; “Oh! Frenchy,” a spicy World War I hit, was her favorite. If you were exceptionally lucky, she’d treat you to hors d’oeuvres: Oreo cookies with cream filling replaced with cheese; instant iced tea made with water from a public fountain.The eccentric “bag lady,” as she was often called, was Lee Godie, one of the city’s most iconoclastic artists.

For nearly 25 years, Godie lived mostly outdoors, sleeping on park benches, even in freezing temperatures. She hid her belongings in rented lockers around town. Her studio was wherever she was—an alley, a bridge, atop a deli.

She was prolific, producing paintings, drawings, and watercolors on materials such as canvas, discarded awnings, cardboard, pillowcases, and paper. In the 1970s, she took hundreds of self-portraits in photo booths at the Greyhound bus station and in the train station. In these black and white snapshots – which she often embellished with paint or a ballpoint pen – she portrayed her many sides: a flirt; a Katharine Hepburn lookalike; a rich lady flashing a wad of cash; and above all an uncompromising artist whose work can be found in American museums today.

Jamot Emily Godee was born in Chicago on September 1, 1908, as one of 11 children raised in a Christian Scientist family on the Northwest Side. The Godee house was small and the sisters slept in the attic.

Because Godie was intensely private and a fabulist regarding her own life, it can be difficult to decipher the truth of self-invention. She once claimed to have worked as a switchboard operator, although her real ambition was to become a nightclub singer. In 1933 she married George Hathaway, a steam fitter with whom she had three children; a son died of pneumonia at 18 months and a daughter died of diphtheria at age 7.

Godie married again in 1948 and moved to Tacoma, Washington, assuming her new husband, Austin Benson, would champion her singing career. Instead, she was on his chicken farm, pregnant again. She ran away shortly after, leaving her family in the lurch for good.

Godie disappeared for a while afterwards. Kapra Fleming, who released a documentary last year, “Lee Godie: Chicago’s French Impressionist,” said in an interview that she couldn’t find any records of the artist between 1952 and 1968. Then, at the age of 60, Godie suddenly appeared on the steps of the majestic Art Institute of Chicago, declaring himself a French Impressionist who was “much better than Cézanne.”

In a 1982 profile of her in The Chicago Reader, Alex Wald, an early collector, recalled for the writer Michael Bonesteel the first time he saw Godie: “She had big orange balls painted on each cheek, painted eyeshadow and eyebrows painted above her real eyebrows, all from the same box of paint she used to shoot her pictures with.”

It’s unclear when Godie started painting or what inspired her to sell her art publicly. She liked to claim that a red bird had told her to pick up a brush. Her clientele initially included students at the nearby School of the Art Institute of Chicago, who bought her works for bargains ranging from $5 to $20 each. (Godie would write the “true” value of her art—usually $2,500 or more—on the reverse.) Occasionally, she would add inexpensive brooches or live carnations as bonuses to sweeten a sale. She also sometimes sewed her photobooth portraits onto a canvas as a kind of advertisement for herself.

“She lived in a fantasy world,” Marianne Burt, one of her student clients, says by phone. “In her mind she was a world famous artist. And everything was about France.”

Godie even pronounced her name in a French accent, like in go-DAY. In a 2008 exhibition catalog for Intuit: The Center for Intuitive and Outsider Art in Chicago, which has showcased Godie’s art, curator Jessica Moss conveyed Godie’s rapture during a French Impressionist show at the Art Institute. “To save herself from passing out in such a respected institution,” Moss wrote, “she devoured a small piece of cheese she had kept in her armpit in case of an emergency.”

At first glance, Godie’s work may seem childish, her figures rendered in a cartoonish style that borders on grotesque. She was primarily a portraitist, although she was less interested in capturing the likeness of a subject than in evoking moods such as wariness or fear, as evidenced by the clenched teeth she depicted in a work like ‘Tidle – Gay Artist Lee Godie, a French Impressionist’. Her images have a deliberately exaggerated expressiveness, as in “Sweet Sixteen” (1973-74) or the undated ‘Smiling Girl’. Both her men and women have bright red lips, large eyes with luscious lashes, and hair that can be unnaturally blond or orange.

“The eerie nature of her people is arresting, at times disturbing, and even alarming, but as authentic as the artist herself,” Bonesteel wrote in a 1993 exhibition catalog. “As she creates her work, she psychologically presses her emotional state on it. off.”

There were recurring figures, including a woman in left profile with a crest and bared teeth, the so-called Gibson girl, inspired by Charles Dana Gibson’s turn-of-the-century illustration of idealized female beauty; Prince Charming, or Prince of the City, a patrician figure with a bow tie and parted hair, often depicted in front of the John Hancock Center in Chicago; and a waiter, a mustachioed man with sideburns, based on a real waiter Godie thought was handsome.

Some of her female figures resembled actress Joan Crawford. Other common motifs were birds, leaves, insects, bunches of grapes and piano playing hands. Godie sometimes wrote on her canvases: “Staying Alive” and “Chicago – we own it!” appear with the frequency of personal mottos.

Godie organized themed parties to showcase new work. For example, the “red party” was held at dawn in Grant Park and consisted of red snacks and art with red palettes. In the 1980s, she streamlined her venture by tracing compositions she had created and selling the copies, essentially mass-producing her greatest hits. She reportedly made as much as $1,000 a day, which she smeared in her shoes, underwear and hidden pockets of her coat. On brutally cold nights, she spent money on a $10 room in a flophouse.

As the word of Godie spread, so did the reports of her combative behavior. She was known for refusing to sell to buyers who didn’t appreciate her temper or otherwise didn’t like her; women who wore pants instead of dresses were blacklisted.

Frank Zirbel, a bicycle messenger at the time, recalled Godie throwing pizza at police officers. Marga Shubart, who developed a friendship with her, once saw Godie smash a stranger’s camera in front of a Bonwit Teller department store. “It was a windy day,” Shubart said on the phone, “and Lee said, ‘Photos don’t get on windy days.'”

But Godie had a soft side. She was known for giving quirky advice, such as telling people to eat crunchy peanut butter so they “would possess the refreshing breath of peanut flavor at all times,” according to Bonesteel.

In the mid-1980s, Godie befriended Chicago gallery owner Carl Hammer, who gave her her first solo exhibition in 1991. (A new exhibit, “Sincerely… Lee Godie,” will be on display at his gallery in Chicago through Feb. 26.)

“I had a love affair with her work,” Hammer said in an interview. “She was one of the most special people in my life. She was the epitome of what I did in the gallery.”

A retrospective exhibition at the Chicago Cultural Center followed in 1993.

Godie was also the subject of articles in People magazine and The Wall Street Journal. The Journal piece caught the eye of Bonnie Blank, Godie’s estranged daughter by her first husband; she had known nothing about her mother’s career on the streets of Chicago. Blank lived in nearby Plano, Illinois, and was reunited with her mother, who was then showing signs of dementia. Blank was granted legal guardianship in 1991. (She now says she is writing a book about her mother.)

Shortly afterwards, Godie was transferred to a nursing home, where she died on March 2, 1994. She was 85.

Today, her work is in the permanent collections of the American Folk Art Museum in New York, the Smithsonian, the Philadelphia Art Museum, and others.

Godie was a jumble of opposites: a flaneur in patchwork clothes and safety pins who considered himself a fashion board; a hot-tempered bohemian who insisted on decency; a camera-shy woman who relentlessly dramatized her inner states. She was an artist who enjoyed beauty even in her harsh concrete environment.

‘I always try to paint beauty,’ she wrote in her diaries, ‘but some people say that my paintings are not beautiful. Well, I have beauty in mind, but it’s not always easy to make paintings beautiful.”