Performing a comedy about abortion, watching the Supreme Court 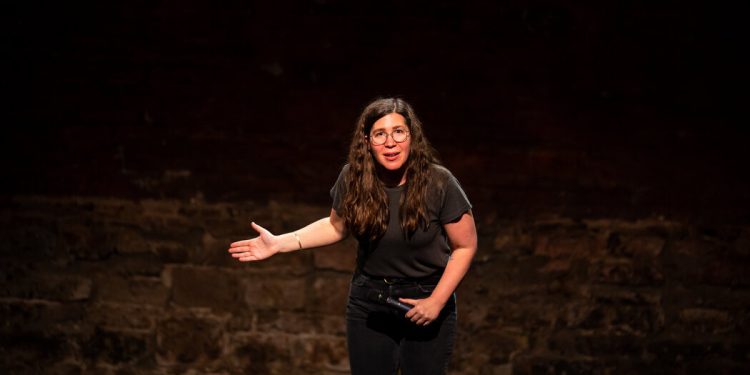 After a preview performance of her hour-long stand-up reproductive rights show, “Oh God, a Show About Abortion,” comedian Alison Leiby had finished dinner Monday night when she checked her phone.

She had dozens of posts, all of them breaking news that a leaked draft Supreme Court opinion that the court appeared poised to overturn Roe v. Wade, eliminating the constitutional right to abortion in the United States.

“It was just an absolute confrontation with reality that this is no longer theoretical,” Leiby, a self-proclaimed abortion rights activist who is perhaps best known for his co-production of “The Marvelous Mrs. Maisel,” said in an interview.

As Leiby began to process what this potential decision would mean for the country, she also realized she needed to think quickly about how it might reshape her show, a 70-minute stand-up set about her own unwanted pregnancy and how it was resolved. with a Saturday afternoon trip to Planned Parenthood. So during Tuesday night’s preview at the Cherry Lane Theater in New York, she addressed the news at the top of the show.

“I’m not going to ignore the literal elephant in the room,” Leiby said Tuesday, thanking the person behind the lone laugh in the audience for getting her puns.

“I’m not changing anything about the news, but I understand your feelings may be different about it,” Leiby said. “If something is funny, not funny, cathartic – feel it. It’s valid. I’m not here dancing for applause. We’re in this together.”

The news that the court is about to overturn Roe, which would lead to immediate abortion bans in some states and prompt others to move to bans and restrictions, comes as theaters and movie theaters around New York City and the nation showcase works about abortion.

In Atlanta, performances of “Roe,” a play by Lisa Loomer, centered on the plaintiff in the landmark case and the attorney who argued it before the Supreme Court. That same day, New York’s Metrograph Theater begins a series devoted to films that touch on or investigate abortion, including Josef von Sternberg’s 1931 drama ‘An American Tragedy’ and the 1987 romantic comedy ‘Dirty Dancing’. a small nonprofit theater in Chicago premieres “Roe v US,” a play billed as “giving a voice to the women who made the choice.”

The same night Leiby’s show in the West Village kicks off, a play that looks at abortion through a completely different lens is scheduled to take place at a Midtown theater: “Oh Gosnell,” about Kermit Gosnell, a doctor convicted of murder in 2013 after failing late abortions. The case became a rallying cry for the anti-abortion movement. Pelim McAleer, an Irish-born filmmaker and producer, said he had seen Leiby’s show as an “abortion comedy” and decided to counter it by producing a play about Gosnell that borrows the lyrics from a grand jury report and trial transcripts, which reads: he wanted to give the public an ‘alternative point of view’.

The show has run into problems: the theater that originally intended to use it withdrew, and two of the seven actors walked out shortly before the previews were due to begin.

McAleer, who has made documentaries questioning opposition to fracking and saying he was working on a film about Hunter Biden, said he was still processing the Supreme Court news. “It definitely means that Gosnell’s story is more relevant than ever and plays about abortion are more relevant than ever,” he said.

Leiby and McAleer’s two shows could hardly be more different. One is a comedy about a quiet abortion procedure advocating broad access to abortion and the other is a graphic play about a notorious abortion provider whose clinic was described by prosecutors as a “house of horrors.” But Leiby and McAleer share a similar goal: to talk about and get the public to listen to a work about abortion.

“Oh God, a Show About Abortion,” which is hosted by comedian Ilana Glazer and directed by Lila Neugebauer – is set to release June 4. After seeing an earlier version of Leiby’s show, Jason Zinoman wrote in DailyExpertNews that, “Without a trace of didactics, she finds humor in the messy, confusing, sometimes banal experience of an unwanted pregnancy and an abortion.”

The show tells her story: of a 35-year-old comedy writer who discovers she’s pregnant in a hotel bathroom in St. Louis. She is so convinced of her disinterest in having children that she red-handedly compares her eggs to Fabergé’s (“feminine but decorative”). At Leiby’s first mention of Planned Parenthood, a group of young, female public health students burst into cheers in the audience.

A member of the group, Zoe Verzani, 24, who wore a bright pink Planned Parenthood T-shirt to the show this week, said she thought Leiby handled the material just right.

“She acknowledged that this was her experience,” but not the only one, Verzani said, adding that “she made room for other people’s experiences.”

Leiby calls on the show for more discussions about abortion. “We only talk about abortion when it’s in crisis when it’s abolished,” she says. “The more we talk openly and honestly about abortion, the less of a disaster it will be.”

Because, she says, it wasn’t a disaster for her — it was an annoying inconvenience. That was why she felt a sense of guilt after hearing the Supreme Court news. As a New Yorker, she noted, her access to abortion is unlikely to change, while women in, say, Missouri — where Leiby learned she was pregnant in 2019 — will lose nearly all access to abortion if the leaked draft of a Supreme Court opinion turned into reality.