Review ‘A Strange Loop’: a dazzling ride on a mental merry-go-round 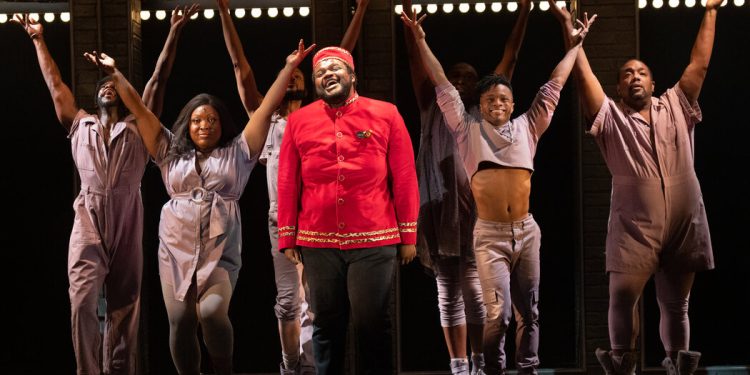 When the homophobic, God-fearing, Tyler Perry-loving mother of Usher, the protagonist of the remarkable musical “A Strange Loop,” describes her son’s art, she uses the word “radical.” She doesn’t mean it as a compliment.

But “A Strange Loop,” Michael R. Jackson’s Pulitzer Prize-winning metamusical about a black gay man’s self-perception in relation to his art, is radical. And I certainly mean that as a compliment.

This musical, produced by Page 73, Playwrights Horizons and Woolly Mammoth Theater Company, forgoes the commercial finesse and digestible narrative of many Broadway shows to deliver a story that is searing and meek, rowdy and disturbing.

‘A Strange Loop’, which opened Tuesday night, isn’t just the musical I saw in the packed Lyceum Theater a few nights ago; it’s also the musical Usher (Jaquel Spivey), a 25-year-old usher on the Broadway production of “The Lion King,” writing right in front of us.

He faces a few hurdles, namely his intrusive thoughts, embodied by the same six actors who gave birth to the roles in the 2019 Off Broadway premiere: L Morgan Lee, James Jackson Jr., John-Michael Lyles, John-Andrew Morrison , Jason Veasey and Antwayn Hopper). They express his fear of being a black curmudgeon gay, the constant denigration of his alcoholic father, and his mother’s pleas to stop running “up there in the gay sexsh’alities‘ and produce a wholesome gospel play instead.

Through scenes that move between Usher’s interactions with the outside world, such as a phone call with his mother or a date, and a constant congress of his most devastating ideas about himself, “A Strange Loop” delivers an astonishing feat: condensing a complex idea, full of paradoxes and abstractions, in the form of a Broadway musical.

Jackson’s script for what Usher calls a “big, Black and queer-ass American Broadway” show and Stephen Brackett’s lively direction cleverly find comedy, criticism and pathos in contradictions. “A Strange Loop” denies itself at every turn: Usher may hate the superficial pageantry of commercial theater while poking fun at tourist baits like “The Lion King,” but he’s also stealing the names of Disney’s favorite savage. cats for his family. his father Mustafa and his mother Sarabi. (It’s satisfying to note that “A Strange Loop” plays just down the street from the Minskoff Theater, which has housed the Broadway goliath since 2006.)

There’s something almost naughty about the show’s subversions. “I’m sorry, but you can’t say an N-word in a musical,” says one of Usher’s thoughts, presented as the “Chairman of the Second Coming of Sondheim Award.” But the 100-minute show is comfortable with a burly mouth, with repeated utterances of that same N-word, such as in the catchy but evil chorus from “Tyler Perry Writes Real Life.”

The paradox at the center of it all, of course, is Usher himself, whose cheeky theatricality and biting humor lurks beneath his meek appearance. Though a newcomer—this is not only his Broadway debut, but also his first professional performance after graduating from college last May—Spivey puts on a serious, lived-in performance. He recoils, tucking his chin, arching his back into the hollow silhouette of a turtle, and giving shy sideways glances so soft they could melt an ice cream cone in winter.

But Spivey’s Usher also has a thorny underside; he spits out sentences, pops his hip and breaks his head in a scathing display of black stereotypes. His most searing jokes leave a satisfyingly sour aftertaste, like the bitters at the bottom of an unmixed drink. When a cute boy on the train asks him, “Did you see ‘Hamilton’?” Usher responds with a clumsy grin, “I’m poor.”

A vortex of worries, memories and worries, Usher’s thoughts spin through his head daily. Jackson nails his comedic beats in a racy performance, full of withering glances and haughty giggles, while Veasey is suitably chilling when he embodies Usher’s father and drunkenly questions his son about his sexuality.

Hopper, who most recently performed as the monstrous pimp in the New York City Center’s production of “The Life,” and has a bass voice with the richness of hot honey, is downright viper-minded in the musical’s most poignant scene, ironically. enough set to a merry country rhythm. It is one of the best examples of the incongruous approach to the score.

“Exile in Gayville”, in which Usher hesitantly logs into a stream of dating apps only to be inundated with rejections, is exuberant pop rock. And when Usher encounters a slew of disapproving black ancestors like James Baldwin and Harriet Tubman, the song (“Tyler Perry Writes Real Life”) is a slow, steady creep. The whimsical woodwinds and skippy beat of “Second Wave” undermined the lyrics about loneliness and, well, ejaculation.

In one case, however, the production hits a simple note. In one scene, Lee portrays a “Wicked”-loving tourist who gives Usher a pep talk, urging him to tell his truth in a heartfelt, optimistic song reminiscent of that show’s “Defying Gravity.” Given the calculated edginess of the rest of the musical, especially given the commercialism of Broadway, such a carpe diem number feels out of place. Sometimes the balance is off in other respects too: on the night I was there, the cast was slightly off-tempo and some lyrics were muffled by the bombast of the orchestra.

Arnulfo Maldonado’s set design aptly captures the many entrances that “A Strange Loop” opens in the main character – and playwright – mind. For most of the show, Usher stands in front of a simple brick backdrop with six doorways through which his thoughts go in and out. That is, until the stage quickly turns into a stark spectacle of neon lights and exaggerated ornamentation, a reflection of everything Usher refuses to produce in his own art. The lighting (designed by Jen Schriever) — which frames the stage in concentric rectangles — is a nod to the nested conceit of the show, and the gradual fade-outs and blitz of radiant hues complement the sections.

The arduous task I face as a critic is figuring out how to write about a work whose brilliance has already been noticed. DailyExpertNews named the show a critics’ pick in 2019, and I wrote briefly about the show’s Broadway tryout in Washington, DC, this fall. It has already won the Pulitzer.

And yet it seems that there is no measure of praise that can be too much; after all, this is a show where a black gay man can be vulnerable on stage without rejecting or fetishizing his trauma, desires and creative aspirations. That is radical theatre.