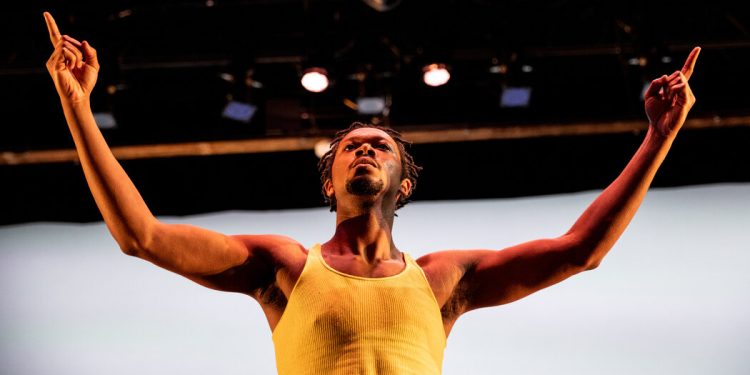 Even before the pandemic forced people into solitude, choreographer Kyle Marshall was working on a solo. In February 2020, he shared a work-in-progress at Danspace Project, asking questions about his Jamaican heritage, his queerness, and the relationship between them. I still remember the quiet, steady power of his running in loops around the sanctuary of St. Mark’s Church, next to the pulse of Bob Marley’s “Exodus.”

Two years later, that sketch has become “I & I,” the focus on a triple bill his company, Kyle Marshall Choreography, presented Friday at the new Chelsea Factory in Manhattan. For its first public performances, this arts center — once home to the now-defunct Cedar Lake Contemporary Ballet — teamed up with the nearby Joyce Theater to present four dance programs over two weeks. (The first week also featured Adriana Pierce’s #QueertheBallet; the second brings tap dancer Luke Hickey and the Calpulli Mexican Dance Company.)

Marshall, who founded his company in 2014 and quickly gained acclaim (while also performing with the Trisha Brown Dance Company), has spoken of the space the pandemic opened up for him: for calm, reflection and shifts in his creative process. He leans towards his Caribbean roots – his mother is Jamaican; he grew up in New Jersey—and in the festive aspects of black dance and music traditions. Book ending “I & I” were two recent pieces in small groups: “Stellar”, a stage adaptation of a film he made last year, inspired by Afrofuturism and jazz improvisation; and “Rise,” which draws on the ecstatic, interconnected energies of club music and the screaming tradition of the Black Church.

While Marshall’s 2017 seminal work “Colored” made an immediate indelible impression, the pieces in this program felt more spacious, expansive, exploratory, slow burns rather than instant knockouts—not wordy, they just took their time.

Perhaps because it’s been easier to rehearse alone than in groups for the past two years, the understated yet powerful “I & I,” on a selection of reggae songs (from the Congos, Dawn Penn, and Bob Marley and the Wailers), seemed most fully realized. After setting up the podium with fabric in the colors of the Rastafari flag – green on the floor; red and gold draped over two chairs – Marshall takes a seat in the soft glow of Itohan Edoloyi’s lighting. Before music kicks in, we hear rippling waves and the hum of an electric fan animating the fabric.

Dressed in slacks, a tank top, and a button-up shirt that he eventually sheds — wrapping himself in those bright hues instead — Marshall makes his way through poses and gestures that alternately suggest captivity and freedom, toughness and release. Fists crossed over his head evolve into languid, undulating arms; a flexed biceps is swept away with the other hand. One minute he’s stoically reclined, the next he’s twirling his hair or twirling his hips.

In what might be a nod to his parents, who were both athletes, he jumps up from a crouched position and jogs around the room. The songs he has chosen are largely about liberation, a return to the promised land, and with its light touch this work seems to reflect both a personal and a collective journey. Moments of silence in particular stand out, such as when he pauses to stare at the audience on the line (from “Exodus”): “Are you content with the life you’re living?” It reads like a provocation to us and a question to himself.

In “Stellar”, which opened the program, Marshall is joined by dancers Bree Breeden and Ariana Speight, along with sound designer Dial Winfield, who conjures up a sometimes penetrating electronic score mixed with softer tones of trumpet, bells and tambourine. With painted sweatpants and shirts by Malcolm-x Betts – dynamic canvases dotted with glow-in-the-dark accents – the three float between improvised and fixed material. Gradually, the structure, which begins with the dancers swinging off balance and catching themselves, comes together around a shared stomping, clapping rhythm, then letting go.

“Rise,” for the same cast plus José Lapaz-Rodriguez, seems to build on some of these ideas, while delving deeper into Afro-Caribbean forms. Here Marshall is talking to Ronald K. Brown as much as he is to Trisha Brown. Stationed in a corner of the stage, sound designer Cal Fish brings ethereal flute over a house-inspired beat propelling passages of exuberant, committed movement. The warmth of the atmosphere is enhanced by Russell Peguero’s flowing, white-and-yellow costumes and luscious red-and-gold makeup by Edo Tastic.

In both “Rise” and “Stellar” the dancers still seemed to settle into the movement, or perhaps the renovated space. More comfort and confidence may take some time. But if the pandemic has taught one hopeful lesson, it is that much good can come from delay.

April 8-9 at the Chelsea Factory, Manhattan.