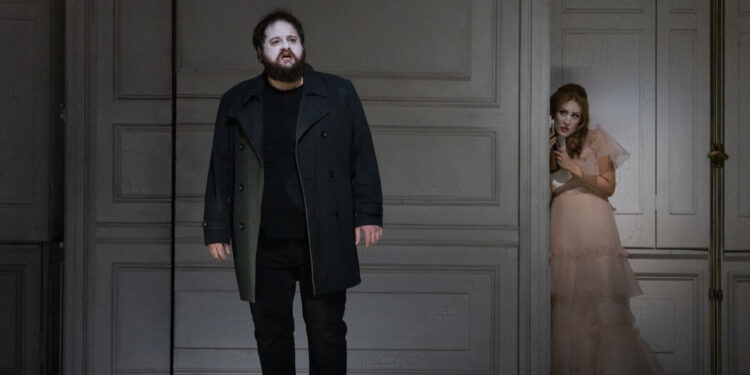 An opera composer would need the epic gifts and epic gal of a Richard Wagner to contemplate an arrangement of “Hamlet” and think, “Yeah, I’ve got this.”

“My first reaction,” Brett Dean has ventured more modestly, “was to say no, that I couldn’t possibly handle something so big.”

But about 10 years ago, Dean put his reservations aside and started tackling the piece, with Matthew Jocelyn by his side as librettist. And as they boldly cut and reconfigure Shakespeare’s text while setting him to a score assured in both crashes and whispers, they knocked him to the ground.

Now at the Metropolitan Opera, Dean and Jocelyn’s “Hamlet” is brooding, moving and compelling. These two performers have put a softly steaming little choir in the orchestra pit, and musicians in balcony boxes for broken brass bands. And both through acoustic means and groaning subwoofers, they’ve almost brought the haunted characters into your bloodstream.

It is a work both traditional and innovative, elegant and passionate – a hit, to quote the piece badly out of context, a very palpable hit.

“Hamlet” has already performed admirably in the 1,200-seat, jewel-box theater at England’s Glyndebourne Festival. It premiered there in 2017, just 50 miles from the Globe in London, where the original play was performed some 400 years ago. When a work succeeds in such an intimate space, there’s no guarantee it will have the same impact in the nearly 4,000-seat Met.

But “Hamlet” doesn’t just fill the Met. It engulfs the huge house. This transfer is not a compromise or pale echo; when it opened on Friday, the two-act opera felt more powerful and coherent than it had five years ago.

In Glyndebourne, the piece made a cool virtuoso impression, appearing more as a clever meditation on the piece than as a deep or poignant inhabitation of it. But it was musically dazzling, and no less at the Met. From the first grave rumble in the dark to the lonely end – papery ripples of snare drum; a cello solo high and longing enough to mimic a viola; silent breathless winds – Dean’s score contains masses and mysteries.

As the story progresses, there are violent explosions and simmering mists of sound, from which the voices emerge, emotionally emotional but also unspeakably human. Electronic auras seem to swirl around the audience, aided by the two antiphonal groups in the balcony boxes on either side of the proscenium – each featuring a percussionist, clarinetist and trumpeter.

Those percussionists are joined by three others in the pits, who wield an army of usual instruments, including temple bells, junk metal, glass and plastic bottles, aluminum foil, newspaper, and a drum appropriately called a lion’s roar. This is an opera that pops and scrapes, flickers and hangs, growling aggression giving way to delicate twinkle.

Led by Nicholas Carter, in his corporate debut, the Met Friday’s ensemble was as focused and rich as the London Philharmonic Orchestra at Glyndebourne had been.

But whether it was a change in my perception or the larger new environment, or both, the combination of Dean’s score and Jocelyn’s libretto—a spirited but deadly serious mash-up of the different versions of the piece—found more convincing now. The opera seems to have grown in itself. Without losing its patient, ritualistic grimness or its games with theatricality, it has a stronger narrative propulsion. What seemed episodic in 2017 now comes across as a tight dramatic arc, the lyrics stylized at times – characters tend to stammer out repetitions of key lines – but the storyline is crisp, lean and always supported by the deft music.

A pivotal factor in that clarity is Neil Armfield’s ferocious, electrifying production, which originated in Glyndebourne but has scaled effortlessly for the Met; bigger is really better in this case. The singers’ faces are caked in floral white, as if Kabuki actors were rushed into service before they were fully prepared. Alice Babidge’s aristocratic costumes hover ambiguously between our times and the 1960s, and Ralph Myers’ set—lit by Jon Clark with flooding daylight and mournful sunsets—is a mansion ballroom that disintegrates and rotates around the backstage of a theater. to become. These characters, we must not forget, are also performers – but that bit of detachment only doubles the poignancy of their struggle.

Tenor Allan Clayton, who makes his Met debut in the title role, is the same confused, melancholy presence as in England. He barely leaves the stage during the performance and is sweating at the end. But the tensions that force the score to the edges of its range now feel more intentional, even beautiful; his tone is sometimes flat lyrical, sometimes sarcastic sharp. Without losing the character’s desperation, Clayton now makes Hamlet more convincingly antiquated and wry – more realistic.

Dean portrays the ghost of Hamlet’s father – a savage, ecstatic invention, sung by the stony bass-baritone John Relyea – Dean is not above creepy, effective horror movie effects. The baritone Rod Gilfry and the mezzo-soprano Sarah Connolly evoke the lavish sternness of Claudius (Hamlet’s uncle and his father’s murderer) and Gertrude (his mother and, fatally, Claudius’ new wife).

Dean and Jocelyn give us an Ophelia more frank and powerful than a fragile flower, but that invisible choir mist from the well floats from the outset around the poised, subtle soprano Brenda Rae, a premonition of madness. When she testifies to Claudius and Gertrude about Hamlet’s strange behavior, we hear not only the bronzed resonance of a temple bowl; we also somehow feel in its claustrophobic metallic void.

Ophelia’s crazy scene, with Rae in muddy underwear, matted hair and a man’s skirt, pounding her chest as she sings to make the notes vibrate, is creepy without exaggeration. Like her avenging brother, Laertes, the tenor David Butt Philip is fiery; like her unofficial father, Polonius, the tenor William Burden avoids caricatures. The whole huge company is strong, including the choir on the stage, an inexorably united crowd of nobility that is feverish.

Though cutely portrayed as a miserly countertenor twins by Aryeh Nussbaum Cohen and Christopher Lowrey, Rosencrantz and Guildenstern struggle to serve a great musical or dramatic purpose. (They were cropped for Ambroise Thomas’s 1868 French “Hamlet,” the only other operatic version still in wide circulation.) But Dean’s imagination and execution are so sure-footed that you’ll accept even the elements you might not have as part of his theatrical world chosen for yours.

And so many of his ideas are inspired, such as adding the desolate country sound of an accordionist (Veli Kujala) to the scene where Hamlet herds a traveling company of actors to stage an evocation of his father’s murder. Later, the whistling of the gravedigger (Relyea, who also sings the head of the group) enters the orchestra with miraculous restraint, until the solemnity of the ensemble is interrupted by sardonic growls of brass and more windy squeaks of accordion.

This is a long score – two hours and 45 minutes of music – and the tempo slows noticeably during a carnage finale that unfolds with painstaking, even painful deliberation. But to live within such a confident vision as Dean and Jocelyn’s, and to feel it living around and within you, is the pleasure that great art offers. Who would want that to end sooner?

Through June 9 at the Metropolitan Opera, Manhattan; metopera.org.