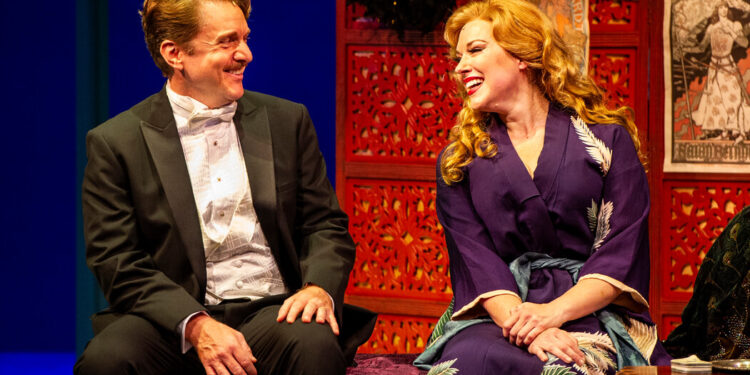 PITTSFIELD, Massachusetts – I thought I’d seen all you could do with “A Little Night Music,” the almost incorrigible 1973 musical by Stephen Sondheim and Hugh Wheeler. But the bittersweet revival of Barrington Stage Company, which opened here Wednesday, ends the first act on a particularly nimble touch. As the patrons step forward for the final chorus of “A Weekend in the Country,” envisioning their upcoming visit to a grand estate, each carries a revealing and somewhat absurd piece of personal baggage.

Count Carl-Magnus Malcom, a military peacock, has a giant hunting bow slung over his shoulder to better stalk wild or romantic rivals. Anne Egerman, an 18-year-old virgin married to Fredrik, a stuffy middle-aged widower, wears a birdcage. (She is the canary.) Fredrik’s son, Henrik, struggles to reconcile his seminary ethic with his love for his stepmother, holding a prayer book. And Fredrik himself, who may not realize he’s bringing skoals to Newcastle, carries a neatly wrapped bottle of champagne with ribbons.

“A Little Night Music” is like that champagne; when the original Broadway production opened, Clive Barnes called it Dom Pérignon in The Times. Bubbly it certainly is, especially Wheeler’s ingenious book, based on the 1955 Ingmar Bergman film ‘Smiles of a Summer Night’. Henrik loves Anne; Anne doesn’t want to sleep with Fredrik; Fredrik longs for actress Desiree Armfeldt; Desiree is held by the jealous Count; The Earl’s wife, Charlotte, is desperate for his attention – the rounds are going on.

And even though the stage is set for what could be a tragedy (arms come out), when they all meet that weekend at Desiree’s mother’s rectory, it ends as happily as a Shakespearean comedy — on the surface. The mismatched and damaged souls are repaired, in both senses of the word.

Despite that fizz, “A Little Night Music”, in a semi-decent production, is also about rue. That’s even more striking in this first year after Sondheim’s death, who so densely stacked his brilliant songs with sorts of regrets. We now feel that regret twice; for the characters no less than for us, pleasure always comes with loss.

So maybe it’s no surprise that this Barrington Stage production, directed by Julianne Boyd, is so good. The mixed emotion is always palpable, especially in the performances of three of her central women. As the embittered Charlotte, Sierra Boggess offers a sad and hilarious sketch of a woman so steeped in her own disappointment that she looks really sour. And Madame Armfeldt, Desiree’s imperious mother, is no senile narcissist in Mary Beth Peil’s lively performance; she is a woman who in her last days clings as hard as she can to the tension of a fully lived past.

But it’s Emily Skinner as Desiree, the focus of the complex romantic geometry, who most powerfully balances the show’s opposing forces and produces the warmest glow. She’s funny, of course; the scene where she welcomes Fredrik (Jason Danieley) to her apartment after a performance and, despite his praises to Anne, agrees to rekindle their long-ago liaison – “What are old friends for?” – is a model of perfectly played situational humor.

But later the humor deepens. Towards the end of the weekend, when Desiree realizes her last-ditch dream of getting Fredrik back for good has failed, Skinner offers a reading of the show’s big hit, “Send in the Clowns,” which, apart from the fact that it is sung beautifully is as layered as a lasagna. Beneath her sporting bravado lies anger – especially at Fredrik, because he’s still ‘in the air’ when she’s ‘finally on the ground’. But underneath is something unexpected and even richer: anger at herself for not taking care of the sordid carelessness of a wasted, licentious life in time.

Still, there was a lot that needed to be refined on opening night. Lighting signals went wrong, scene changes were erratic, wet clothes didn’t drip and a shattered glass produced no sound. In fact, the men weren’t digging as deep as the women yet. Danieley’s Fredrik, not stiff enough at first, has little to unravel as the night’s dramatic events fade. And Noah Wolfe’s Henrik is so flowery tormented that it’s hard to see how his depth can still be appealing.

Such issues will most likely resolve themselves before the show closes on August 28. There’s nothing you can do about Yoon Bae’s flimsy watercolor set and Sara Jean Tosetti’s odd costumes, though. (For “Send in the Clowns,” Skinner wears a gold brocade dress with lamellar sleeves that looks more like a 1970s Vegas drift than 1900’s Sweden.) And though Jonathan Tunick’s original lavish orchestrations into a string quartet , two keyboards and one overloaded reed player is enough to support the more intimate moments of the show, the cheerful ones lack their Straussian aura.

These are some of the costs of putting on a very ambitious show at a regional theater with no big Broadway money behind it. In that sense, they may be not just the cost, but the glory. After all, it’s no small feat to see such dignified productions – and I’ve seen many here over the years – in a shabby, de-industrialized city like this. It is crucial to the culture that complex work at every level is performed with honor, and also crucial to the local economy. Barrington Stage appears to be one of Pittsfield’s most successful companies.

For that you have to thank Boyd, who founded the company with Susan Sperber in 1995 and will retire as artistic director at the end of this season. (Alan Paul will take over in October.) Having previously directed “A Little Night Music” in 1998, when the troupe performed in the auditorium of a secondary school arts center in nearby Sheffield, she knows it all. of the mixed feelings: how the promise of growth and accepting limitation are often the same. That’s the gift she brings to the stage at the end of the first act — just like she’s brought it to us in the audience for 28 seasons.