Review: In ‘Oratorio for Living Things’ you are the number 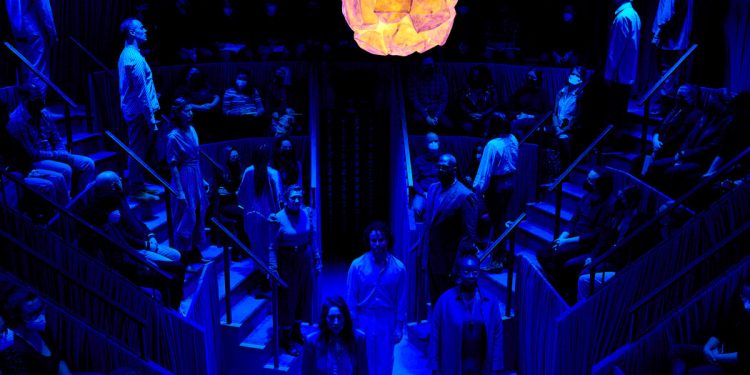 At the Academy of Music, where the Philadelphia Orchestra used to play, loyal subscribers were sometimes rewarded with a chance to move from the floor to the seats to the raised gilded boxes at the back of the horseshoe. After my parents took that step, my mother soon regretted the change. It’s true she saw the players better from above, but she’d felt them better from below, where the buzz of bassoons and blowing tubas through the woods came straight to her feet, turning symphonies into earthquakes.

I thought of her trembling metatarsals—and so much more about the rapture of intimate art—as I sat in the wooden amphitheater that houses “Oratorio for Living Things,” Heather Christian’s deeply strange and overwhelmingly beautiful new musical theater piece at Ars Nova’s Greenwich House theatre. † Tightly packed into the small, craggy, egg-shaped bowl designed for the space by Kristen Robinson, six instrumentalists and 12 singers there create music that shakes the 100 spectators like a 90-minute earthquake.

That seems appropriate for a work on profound human issues: our place in history, our place in the universe. At least, that’s what I think it’s about, judging by the lyrics I picked from the sound and from reading the libretto later. Even then, I wasn’t always sure I could pass a content test; although an author’s note in the program explains that the subject is time on three scales – quantum, human and cosmic – much of what was billed as quantum or cosmic felt distinctly human to me.

Does not matter. If the text is mind boggling and hermetic at times, it’s so sure of its quirkiness that you don’t have to worry about it crashing when flying close to the twin line. Although I apparently didn’t recognize the “ballet of chloroplasts and mitochondria” that is part of an early section called “Oxygen + Photosynthesis”, I still enjoyed it. For Christian, ideas are fuel; it’s not that “these words mean nothing,” as one lyric timidly suggests, but that their meaning is incomprehensible through our usual interpretive circuitry. Unknowability, as part of the message, is necessarily part of the medium.

As if to emphasize that and draw parallels to traditional oratorios, much of the text is sung in Latin – but in this case translated backwards, by Greg Taubman, from Christian’s English originals. Even if the words are contemporary, they are often taken from unusual sources, including an account of how we spend our lives (sneezing 13 days, giving 10 minutes of bad clues to strangers) and a telephone line Christian set up to request “memory mail.” :

“I was about 5 years old and both my parents worked late all the time,” someone begins.

What is haunting is how Christian’s oratorio form and private cosmology elevate such banal statements to an almost sacred level. Alternating in the classical fashion between massive choral singing and solo arias – all beautifully performed under the musical direction of Ben Moss – she tosses several centuries of musical styles into the pot and swirls them around. The ear goes through currents of Gregorian chant and gospel, blues and electronica; you can catch snatches of Orff and Reich, Holst and Massenet, just like seeing faces in a crowd.

Yet this is not concert music. Directed by Lee Sunday Evans, the production emphasizes thematic coherence and theatricality even without a traditional narrative. Both the set and the performers are draped in varieties of deep-space blue, as if to suggest a shared chemistry between people and their environment. (The beautiful costumes are by Márion Talán de la Rosa.) The sound (by Nick Kourtides) and lighting design (by Jeanette Oi-Suk Yew) are also saturated, picking out voices and faces – great ones to start with – to make the emphasize the changing dynamics of individuals and groups.

In fact, Evans has found a way to work with the singers so that every syllable sung, even the seemingly meaningless one, feels like it has a specific emotion underlying it.

But what is that emotion? Traditional theater often tries to engage audiences by pushing them toward a shared response, be it horror or hilarity. Christian doesn’t work in that spirit. As in previous pieces such as the requiem “Animal Wisdom” and the Mother Teresa cantata “I Am Sending You the Sacred Face”, she focuses on personal expression rather than the story, content to make the formal elements the greater experience. form and let listeners free to make their own connections.

In less able hands, this can lead to chaos or camp, but even her mother Teresa, played by a man in drag with a ring light as a halo, dodged that trap. “Oratorio for Living Things,” which was shut down by the pandemic after two preview performances in March 2020, is taking similar risks to get as close to spirituality as a contemporary theater piece dares. Towards the end, after some sort of catastrophe has brought the music to a halt, we are asked to stand in silence for a while, “feeling where we are on this New Year’s Eve of the cosmic year.” The performers admit we might find this embarrassing: “We’re all embarrassed,” they say.

But I – who usually slid under my seat when I was dragged into acts of audience participation – wasn’t ashamed at all. Instead, I felt the kind of awe I feel in cathedrals, where the architecture itself forces your thoughts up and out. Or maybe I felt more like my mother when beautiful music came through her soles. Likewise, in “Oratorio for Living Things,” Christian provides the notes, but your body is the song.