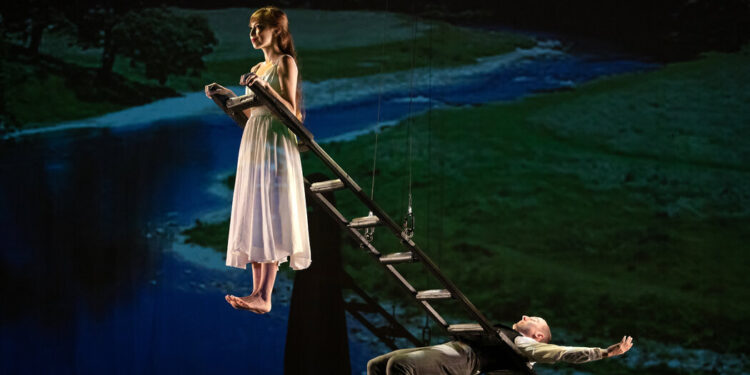 The dance critic Edwin Denby once wrote, “Everyday life is wonderfully full of things to see.” That observation came to my mind on Thursday during Momix’s “Alice,” a banal and crowded 85-minute spectacle now at the Joyce Theater. Not that anything special was going on; quite the opposite. At that point in the show, the thought of just stepping outside the city night — to watch traffic, the sunset, or people on the street — was more appealing than any fantasy portrayed on stage.

Founded 42 years ago by choreographer Moses Pendleton, Momix is ​​known for its illusionistic extravaganza and has turned to Lewis Carroll’s “Alice in Wonderland” as inspiration for its latest version. Conceived and directed by Pendleton, the work meanders through short, gag-and-costume-driven vignettes—22 of them—loosely derived from Carroll’s world. Other than recurring appearances from multiple Alices, who tend to wander in and out as they seem lost, not much keeps these scenes together; they read as interchangeable parts. If you’re looking for a serious involvement in storytelling or storytelling, this isn’t the rabbit hole for you.

The opening is as good as it gets, with a simple elegance that feels refreshing afterwards. Against a projection of a river and a lush green landscape, Jade Primicias (the first of the Alices) sits on a horizontally suspended ladder and reads a book with her character’s name. The ladder begins to spin (aided by another performer), as her feet graze the floor in a lightweight bounding motion. Thus begins her descent.

From there it’s an onslaught of attempts at psychedelic imagery, often getting closer to the mundane or vaguely offensive. Among the many creatures and caricatures we come across a herd of wild rabbits, triggering the most athletic dance of the night (many split jumps); a trio of jovial brace-clad Mad Hatters; and an abundance of queens, representing all playing card suits. Acrobatic tricks and lifts accentuate the ordered choreography, sometimes with objects such as exercise balls or rolling platforms. Costumes with a life of their own deform and lengthen the body.

Projected backgrounds, reminiscent of low-res screensavers, try to transport us. We are on the beach; now we are in the jungle. The energetic soundtrack, a crowded and traveling playlist, seems to evoke a non-specific sense of ‘the exotic’. A scene called ‘The Tweedles’, which combines Bollywood music with bobbing white baby masks, aims to be amusing; it comes across as clumsy and careless. The most truly trippy scene is the shadowy “Cracked Mirrors,” in which reflective props and spider-like lighting team up, along with the dancers, to disorientate.

“Alice” is physically demanding, and the small cast of eight dancers deserve credit for carrying his heavy load, which can apparently be not only strenuous but dangerous. On Thursday, during a scene in which shrouded figures prowled around with large circular protrusions on their backs – their faces and bodies ensconced in elastic material – a dancer fell off the stage, and not on purpose. The audience gasped; it looked painful. The fallen performer managed to clamber back up and into the wings, and luckily, a company publicist said, he was not injured.

Still, the incident revealed the dangers of this type of work and underscored a nagging question: When wonder can come to us in so many forms, is ‘Alice’ really worth the risk?

See you July 24 at the Joyce Theater; joyce.org.