Review: The Balletic Rise and Fall by Eva Perón 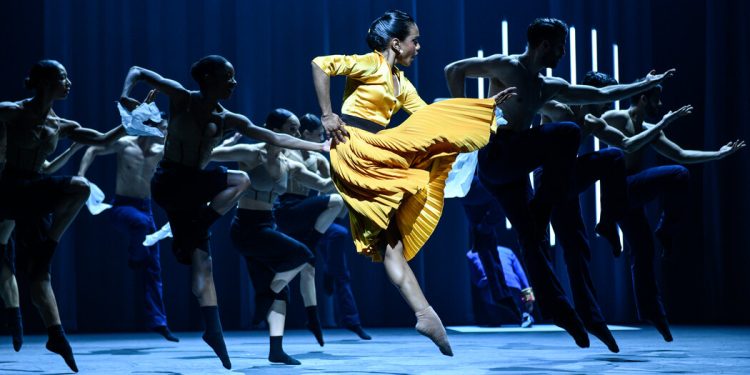 Ballet Hispánico, founded in 1970, has been celebrating its 50th anniversary for two years now. On Friday, the company presented the closing program at the inaugural City Center Dance Festival in this extensive party, which started stiffly with canceled performances in April 2020. Anniversary events often feel like empty fanfare, but this turned out to be a milestone, a breakthrough: the company’s first full-length production, and a striking one.

Choreographed by the prolific Belgian-Colombian dance maker Annabelle Lopez Ochoa, the 75-minute “Doña Perón” is a vivid portrait of 10 episodes of the life of Eva Perón – Evita – the mythical and polarizing Argentine actress who rose from poverty to populist first lady, all before age 33, when she died of cervical cancer.

In an interview about the work, Lopez Ochoa said: “We really wanted to create a portrait of a woman without being judgmental,” an approach she echoed Friday in a post-show conversation with Ballet Hispánico’s artistic director, Eduardo Vilaro. Still, it’s hard to break free from “Doña Perón” who doesn’t admire his main character, partly because of the storytelling choices – emphasizing the personal over the political – and partly because of the brilliant lead in the opening night’s cast, the captivating Dandara Veiga.

One of the production’s strengths is the thoughtful integration of movement – Lopez Ochoa’s stilted, athletic style of contemporary ballet, beautifully danced by the entire cast – with clever design elements. This harmony is distinguished from the first, sacred image: Veiga alone in the center of the stage, raised on a pedestal in a voluminous white dress, as if halfway through the ascension to heaven. (Mark Eric designed the costumes that drive the plot, many of which come and go through seamless changes on stage; the spare, functional set, and projections are by Christopher Ash.)

Veiga is soon joined by a chorus of dancers representing Evita’s working-class supporters, the descamisados ​​(or the shirtless), who wave white cloths in the air. Their grounded, unison phrases made up for the silence of her authoritative demeanor: arms raised at right angles, framing her face, a recurring gesture that sometimes shudders in a frantic movement, repeated throughout the group. Sounds of a recorded speech and cheers run through Peter Salem’s dramatic original score (played live) for bandoneon, piano, percussion, cello and violin.

Lopez Ochoa, who worked with director Nancy Meckler, identifies early on that something is wrong: Veiga convulses and sways off balance; her followers catch her. In the second episode, we meet the child Evita (the brave Nina Basu) and witness her rejection by her father, who had a second, wealthier family. Young Evita returns to ballet, sometimes banned by her older self and sometimes embraced.

The action progresses through Evita’s move to town, showing her flirtations with men—a display of deft, tango-inflected partnering—and her continued rise to fame and power. (Although very different from Andrew Lloyd Webber’s musical, this narration of Evita’s story seems to take a few cues from the storyline.) Chris Bloom, as Juan Perón, is a skilled technician, but overshadowed by Veiga’s gradually increasing light. Their chemistry, as husbands and political partners, never quite clicks.

Theatrically, “Doña Perón” suffers from a few overwrought and undercooked moments. The specter of the disease sets in melodramatically: every now and then Veiga falters and clutches her abdomen, while projections of what appear to be roots or nerves flash across the background, suggesting the body’s internal deterioration. When her character dies and Bloom tries to resuscitate her, the interaction is almost cartoonish.

But other passages are as poignant as these are flat. Towards the end, Veiga (on stage for almost the entire work) is alone, shunned by the waltzing upper classes. Silently (the music has cut out), she tosses her high heels and diamond necklace back to the wings and starts stomping with compelling rawness and yelling, “Che! Che!” The ensemble joins her, multiplying her rhythms with their own a cappella sounds and body percussion. In this amalgamation, you see not just a compelling story, but a company that has reached new horizons.